Has the Legion of Super-Heroes Monthly Comic Been Cancelled?

Has the Legion of Super-Heroes comic written by Bendis been officially cancelled? I don’t recall seeing any formal announcement and the last published issue never completed the story.

I think Bendis has teased about it coming back on his socials, but nothing concrete has been said yet.

As a long-time L.S.H. fan I too want the book to return, but please find another writer for it. The Legion as scripted by Bendis was literally unreadable. Dialogue splash pages make for an arduous read. All that beautiful Ryan Sook art was wasted on a gigantic bore of a book.

I believe the hiatus is to give Ryan Sook time to put as much detail as he’d like into each page. It will be worth the wait.

I feel that – like, I think there’s a lot of cool ideas with the worldbuilding Bendis has done, I love the whole self-created planet aspect of it all, but from what I’ve read the characters themselves feel rather interchangable.

I know he probably won’t be doing it any time soon because he’s got that Substack money/project he’s working on, but I would LOVE to see Johnathan Hickman pick up the Legion at some point.

I believe the hiatus is to give Ryan Sook time to put as much detail as he’d like into each page. It will be worth the wait.

Jon is out and into his own monthly

DC hasn’t launched a new series out of Infinite Frontier

There is no Bat connection 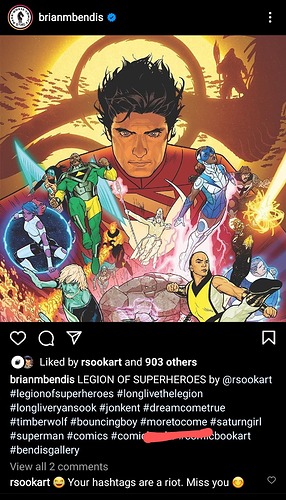 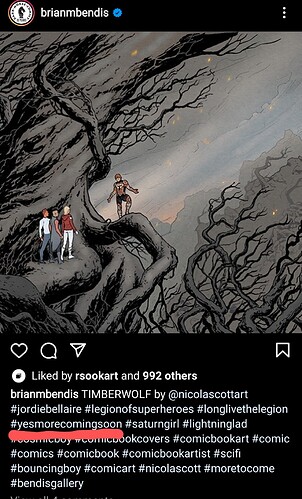 I pretty well agree with you. I LOVE the Legion, but I just couldn’t figure out what Bendis was doing. I knew enough to identify characters, but I have no idea how a new reader would know who most of the Legionnaires are. We didn’t get much of an intro to the huge cast, and we didn’t even get consistent name tags. Unless everything somehow makes sense down the road, I think we need a fresh start.

Love the Legion and I’m glad I’m not the only one missing it. They introduced a beautifully visually diverse cast of characters, but did little in depth character development to really endear them to the readers. No reason that Jon Kent couldn’t continue in the book as he is time-traveling from whenever. Whoever takes over I hope they don’t start over from scratch again, but resolve some of the dangling plotlines around New Krypton and Mon-El. Not to mention that stupid Saturn Girl kiss with Jon.

I was hoping that he was done with the Legion and with Infinite Frontier we’d be getting the original Legion back. Huge Legion fan, but not a fan of Bendis’ version at all.

If it hasn’t, it should be. I once believed ANY version of the LSH was better than No LSH. Even during the horrible threeboot era and into the muddled retroboot stories. But this most recent load of poo was the last straw. I No longer consider myself a fan and would rather there be NO LSH at all than have another travesty like the one most recently offered. Change just for change’s sake has NEVER produced anything worth having. Good story telling with a bit of logic and consistency behind it ALWAYS produces the best results.

Bendis talks the return of LEGION OF SUPER-HEROES - The Beat

And what connection will there be between the return of LEGION and the conclusion of INFINITE FRONTIER? Brian Michael Bendis has the answer.

Too Little. Too Late. I WON’T be buying this TRASH they are trying to pass off as the LSH. I am done.

I WON’T be buying this TRASH they are trying to pass off as the LSH.

Give specifics- what specifically has you so upset??

Bendis is also writing an LSH cartoon for HBO Max. Yeah I have no hopes for it.

This sounds like the “He-Man Brian Bendis Hater’s Club.” (to paraphrase the Little Rascals)

I will admit that, for such an enormous cast, right off the bat, only a few characters received any kind of “air time.” Several of the new characters (and many of the “old” ones) never really got more than a “Hi, Jon Kent.” I really think the 12 issues we got were only a scratch on the surface of a world he was trying to build (yes, I get it, some people don’t think it was necessary to do that, but guys, it wasn’t your world, your vision). If we’d have gotten fifty or more issues, I’d bet at least a few of the characters that got basically nothing would have been fleshed out a bit more, and the world would have made more sense. Yeah, it was taking a lot of time just setting up that world, but world-building can’t be done in two issues.

And there were plenty of complaints with changing the ethnicity of some characters (Garth and Ayla in particular) and various other things along that line, but again, it’s a huge cast, always has been, and it’s pretty naive, at least in a world not of the 1950s, to imagine that the only people who would take to the stars would be of Indo-European ancestry somewhere deep in their family trees.

Maybe the title of this thread should have been “F****** Brian Bendis.” At least that’s what it appears to have turned into…

Man, I’m pulling that soapbox out a lot today…

I hate his work, not him.