Has the Justice League Ever Been Close to Gender Equality?

Jorge Jimenez just teased a new Justice League arc. It’s gorgeous art as expected, but I also noticed that 2019 won’t be the year that the Justice League reach gender equality.

My question concerns the “Justice League” but extra credit if anyone also knows if any of the Justice League offshoots have reached 50% representation.

They have been around for about 60 years and I can’t shake the feeling that their brand of Justice is starting to stand on shaky ground.

In Brad Meltzer’s Justice League, there were four women

The first few issues are the Trinity discussing who should be members, but membership is the result of outside events.

I think I remember that Power Girl and Cyborg were worthy to be members, but Bruce vetoed Nightwing.

Read the comic, it is in our library.

I would say that Red Tornado is a guy.

Is that the highest it has reached in 60 years, or does anyone know any other composition that has been closer?

I am genuinely curious as statistical anomalies only goes so far as an explanation. There is a point I feel that has been reached a long while ago where one needs to start questioning what is going on among the DC writers, editors and management. The statistical chance of all the justice leagues being picked this way without a systematic bias is well, just about zero.

There was a time during James Robinson’s run on Justice League (around issue #53) that the lineup was:

The era didn’t last long, and more characters eventually came and went, but it’s the most female-heavy lineup in my memory.

Personally, I think Wonder Woman (or any of the female heroes) would take offense at this question. I don’t think WW sees the gender inequality, nor would she feel that she needs same-sex backup. She’s a freaking powerhouse!

And I don’t think any of the other female heroes are any less. I mean, seriously. I wouldn’t want to meet Batman in a dark alley. But I’m pretty sure Black Canary, Hawkgirl, or any of the others would also make me sh!t my pants.

I personally don’t care how many men vs. how many women are on the team as long as the story is good and the characters are well written.

Does it have to be an equal amount. Wonder Woman is a kick-butt superheroine. She can hold her own against Superman. I don’t see the significant importance in having an equal number of boys and girls. That certainly wouldn’t come across as important on a crime fighting team. I don’t think it matters who kicks a person’s butt, and they certainly aren’t going to care if it was a man instead of a woman when that hero’s fist just collided with their face. But as the man said when fighting a woman, “I am an equal opportunity crime-fighter”.

It doesn’t have to be equal at any given time, but when it is skewed for 60 years it reflects something about DC. While you may not care what the composition looks like - they most definitely do.

In a company where no one cares about the composition, I am sorry, this is just not going to happen.

While I love DCSHG, its existence is a counterweight for a skewed balance that shouldn’t be there in the first place.

I applaud that lots of people who work for the comic companies take a stand in the infectous environment where the mere existence of a Captain Marvel movie or an upcoming Supergirl movie is enough for some people to go mad. But this reaction is a response that happens because their comfort zone is being shifted.

If everyone had grown up with the notion that heroing isn’t about gender and we can all work together, then no one would have batted an eye. But this bed was made by the comic book companies, and they are still making the beds for the next generation.

If you are a girl in the next generation you will most likely be imprinted with DCSHG, a comic world where boys are put on the sideline, or with the main animated universe, where Wonder Woman seems to be just about the only recurring female character. What kind of future discourse that will generate is still left to be seen.

And I do wholeheartedly believe that the imprints of our youth matters a lot. The early years shapes our view of the world and has ultimately real life consequences.

Or maybe I’m wrong. Maybe the Justice League composition is just the weirdest statistical anomaly. Maybe we are just genetically terrible and a large portion of us humans were always meant to head to the internet to barf on Captain Marvel. I just don’t want to believe it. I have to believe that we can change it with time if we change the normal. And that change can very well start with the Justice League - the supposed premiere group of Earth’s finest.

… and why the Justice League?

If you fix the Justice League, a lot of other things fixes themselves.

People of both genders and all colors have been successful since the dawn of history. There are countless examples all over wikipedia.

Please don’t diminish the accomplishments of these successful people by lowering the standards and expectations of our society. Instead, continue to challenge individuals to push themselves, work hard, and improve their own lot in life.

My teenaged daughter was telling me today that she found it terrible that people wanted to change James Bond to Jane Bond. She’s not a fan of the franchise. But she couldn’t understand why a woman-led franchise would need to rely on a man. Why couldn’t there be something new? I mentioned the TV show Alias and how successful it was. She mentioned a half dozen female DC characters (she’s not really a fan of comics, but she’s seen most of the DCAU).

Personally I was proud of her outlook. She’ll enter the adult world soon. And I hope she doesn’t wait for someone to hold the door open. Instead, I hope she just walks right in.

I don’t know who you are disagreeing with, but if it’s with me, I didn’t say any of those things… Just cleaning my record.

DCSHG is one of DCs best sellers, selling at 100k+.

Make it and people will come. The historical mistakes of not having a good offering has led to lost generations. There needs to be a course correction in the main universe to hold on to the new readers.

And would it be a bad thing if the Justice League had a tg representation? Nia Nal is quickly becoming a beloved character on Supergirl.

Sorry, maybe I misunderstood. I thought you were asking to “fix” Justice League by artificially imposing some kind of gender quota on the team. If that’s not what you were asking, I must have missed the whole topic.

I think what you’re talking about isn’t so much equality as it is parity. You really can’t make a case (at least since the 80s) that characters like Wonder Woman and Black Canary aren’t as respected as their male counterparts in the League but you definitely have a point that they’re grossly under represented.

I think the closest the League has ever come to having an equal number of male to female members was the Robinson run someone mentioned up thread. Meltzer is also a good example though if I recall that run correctly he pretty quickly added more men in the second arc. Part of the problem with the League has been the fact that it has traditionally been a group of the most popular heroes which skews it towards being male dominated.

Here’s a cover image from Justice League 3001. Personally, I thought the series was underappreciated. Anyway, Flash and Guy Gardner being cloned as women was part of the story. It made sense; it wasn’t forced by some agenda. And it was a ton of fun to read. 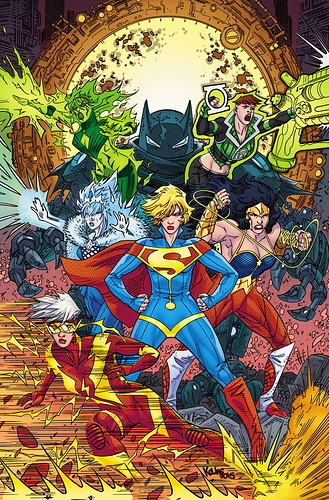 LSH does better in this regard, but they’re from the future so that’s not really fair.

James robinsons justice league, right before the new 52. I remember it bein a pretty diverse bunch. Supergirl was in it,finally makin the roster.

His cry for justice mini was a super-downer, but his work on the regular book was fun.

So here’s a question: which female heroes really work within the framework of the Justice League (The World’s Greatest Heroes)?

Wonder Woman: As a founding member and a part of the Trinity she’s a given.

Black Canary: She actually replaced WW during the post Crisis period when they retconned the foundations of the League to remove all three Trinity members.

Hawkgirl: Even if she isn’t quite iconic enough from the comics alone I think her inclusion in the TV show elevates her to that level.

Powergirl: All of Supergirl’s powers but she has more maturity and experience and avoids the Wonder Twins problem of becoming a glorified mascot.

Jessica Cruz: Any human Green Lantern works in the League.

Jade: Close enough to a GL to count.

Big Barda: Because a New God is a good idea on any team.

Zatanna: Probably the spellcaster that works best within the League.

Mera: She’s got just as much reason as Aquaman does to be there.

Dr Light, Vixen, Fire, Ice, Maxima & Crimson Fox: I don’t know that any of them really fit the League but I think you can justify their presence based on prior history.

They have had a human simultaneously run perhaps the largest corporation in the world, fight villains at night, drive technological development that is far beyond cutting edge, while fighting Gods with a utility belt. If they can sell that believably for 60 years they could put any DC character onto the JL for a few runs.