Has anyone else read Ex Machina? 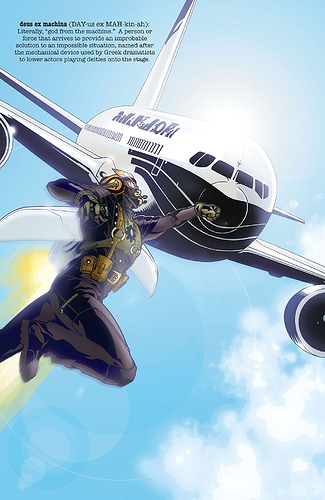 I felt that the best way to make my return was with one of these threads where I ask if anyone else has read a (relatively) obscure comic I’m currently enjoying or have enjoyed.

Anyway, with that out of the way… Ex Machina is pretty fantastic. I’m a pretty big fan of Brian K. Vaughan (who isn’t?) going back to Runaways, but I put off reading this because the title wasn’t great, and the pitch seemed like the least interesting thing Vaughan had done. I picked up the first volume after reading The Private Eye (another excellent book) and being in a Vaughan mood. I was utterly blown away. The writing was expectedly great, but it was the art that first caught my eye.

Tony Harris is one of those photo-referencing artists that I tend to find very stiff, and while this book didn’t reach the heights of Harris’ work on Starman, I was shocked at first how nice the book looked. Most of the storytelling is great, and Hundred looks excellent flying around in his Great Machine costume.

Which brings me to the characters.

Vaughan is a master of character creating. The Runaways, The Hood, PI, Yorick Brown, the list goes on. Ex Machina is no different. All of the characters feel like real people, which is something particularly difficult when attempting political drama, or even just politics in general. Mitchell feels like an actual mayor, acts like one, and, going back to the art, carries himself like one. The other characters are equally interesting, and even when the plot dragged a little, they kept me coming back.

Which brings me to the plot.

The concept is unoriginal, for sure. A post-9/11 superhero deconstruction was a tired concept even in 2004. The idea of talking to machines is cool, but also something that we all do all the time in 2019. The point is, the general outline didn’t sell me. But that’s okay. The elevator pitch is not the final product (just ask Kieron Gillen). Ex Machina is a little (okay, A LOT) like The West Wing. Fast talking, quick moving characters, and politics zipping by you left and right. It’s the way these politics dance with the superheroics that sold me. Every conversation is drowning in extenuating circumstances and bureaucracy. Every action has to be considered in the context of Hundred’s mayor-ship (that’s not a word), for sure, but the political aspect is inseparable from the capes-and-tights work. I’m not going to spoil anything that isn’t in the first issue, but the reason Hundred has a job in public policy in the first place is because he stopped the second plane during 9/11 after unmasking. This cleverly ensures that the two halves of the book (Batman and West Wing) are never in conflict with each other, instead mixing in an incredibly smart way.

This is all to say, read this book if you haven’t. It’s well worth your time.

I’m assuming that the Garth Ennis work in issue 40 didn’t hurt either.

I loved Ex Machina, Vaughan is a great writer.