One of the best Batmobiles ever

Read this one a while back and just re-read it again, some random thoughts: 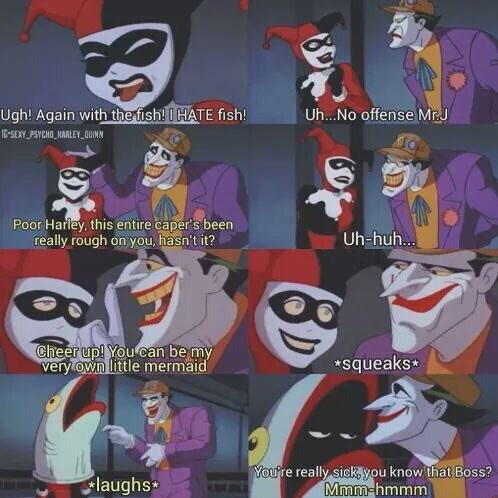 I watched the episode before I ever read the comic, but loved both versions! I think they stayed pretty consistent with adapting it to a new form. I adore Bruce Timm’s art and his Harley design is my ultimate favorite. As far as this story goes, it’s my third favorite episode of BTAS after Almost Got Im and Harley and Ivy.

The story is treasured for most of us Harley fans as it’s one of her main origin stories. It depicts the manipulation and abuse cycle she experiences regularly in an excellent fashion. It was devastating to see her realize how horrible he was just to fall right back in love with him again. Batman spoke so much truth to her in this episode, and he gave it to her brutally but with kind intentions. Honestly though, he’s lucky Harley can be a little blind to manipulation or our favorite bat might’ve been a dead bat lol

Harley in the nurse’s outfit is very cute

Harleen with her glasses is very cute

Nervous Harley on the pier is very cute

So…
I say we should all just agree that everything Harley is VERY cute!!!

After a month and a half of binge reading Walking Dead I really need some Harley in my life!!!

I enjoyed this book.

I prefer the origin of strong and powerful yet lonely and vulnerable Harley in Harleen over Tricky Little Hoe Harley but the book itself was both SUPER fun and silly and very emotional.

You see this kind of love in dogs and children. The type of love that keeps on loving no matter the abuse. To see it anywhere else is rare AF and it’s heartbreaking to see it taken advantage of!

This is the beginning of the third week at a new job for me and I read this in the break room on lunch and the people I work with now have a very good understanding of how emotionally invested I am in my picture books!!!

The scene with her broken in the alley and the “it felt like a kiss” panel hit HARD! I think Hamlet referred to it as “the pangs unrequited love.” (…but it’s been a minuet so I should Google it…“the pangs of despised love”…I was close enough…) This is why I love Harley Quinn so much!!! That no matter how much she’s hurt, she endures! And even though she’s managed to leave Joker behind, we have yet to see her give up on love!!! She has chosen to be rather than not to be and that’s VERY inspiring. I’m glad I typed this!

Other than all the deep squishy feely stuff, I loved Batman calling Joker “Puddin.” That made me chuckle and the art just gave it a real fun flow that made it to where I didn’t even notice this was a >50 page book.

I’m going to have A LOT of fun with this book club! Thank you all for playing with me!

One of the best Batmobiles ever

I’ve read it before multiple times, seen the episode like three times more, it’s a stellar story, and I think the story that turns Harley from a fun little side character in the animated series into a deep, rich character that can stand her own among all the other classic characters in the Bat Universe.

So I have the Deluxe Edition of the book in my own collection and I thought I’d share some details that the book mentions:

The story and overall backstory for Harley was inspired by a mutual friend of Dini and Timm’s who at the time was going through her “mad love” with an abusive boyfriend. They mention that the girl did successfully leave the louse and at the time of publishing was happily married to a guy who treats her right.

(On a related note, but Dini later suggests in his graphic novel memoir Dark Night that there was a bit of himself in Harley, since at the time of doing Batman: The Animated Series, he was dating the wrong kind of women and hurting himself in the process. By the way, if you ever get a chance to read it, do so, it’s an incredible work.)

Bruce Timm was initially very daunted by the prospect of drawing a 64 page comic, and what helped him was Keith Giffen, or specifically the style of how he wrote and drew Legion of Super-Heroes in the late 80s, where he based most of it on a Watchmen-style 9 panel grid. So he traced the panels off of the comic, xeroxed a bunch of copies of the grid page, and just drew off of them. This helped Timm focus on the storytelling and not worry too much about what fancy page layout he should do.

They also mention that the one big thing that DC asked them to redo was Harley’s seduction page. Originally in the “rev up your harley” panel, she had her legs up in the air like she was riding a chopper bike. They thought it looked more goofy than provocative, but they changed it at their editor’s request.

Some other things that were changed/cut:

And there’s more cool stuff like that too. I highly recommend getting this edition, especially if you’re into the behind the scenes process stuff in making comics. 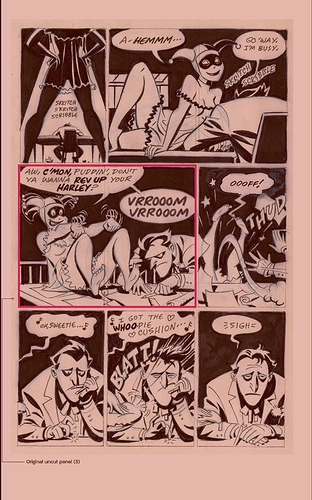 And an unused back cover for the original issue: 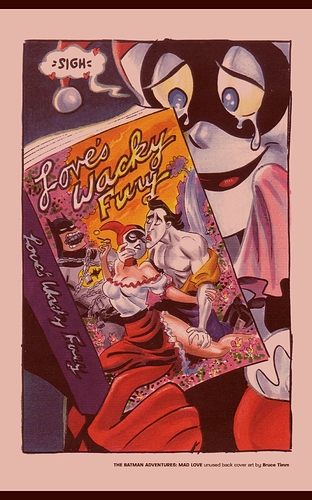 @Mae- Right? Clever stuff there from Dini and Timm.

Storytime! When I was 13 or 14, I was walking back from school one day down my street and somebody had collected dozens of Harlequin Romance paperbacks and set them in a box next to the trash to be picked up. Well, being the silly nerd that I am, I rescued the box of goodies from the garbage people, snuck it back home so no one could see, and hid the books in the back of my shelves.

I didn’t actually read all of them, I read parts of some, but I loved the covers, they were cheesy but beautiful and sexy, and I don’t even remember the stories, but yeah that’s my Harlequin connection…

I remember the Harlequin Romance books from the grocery store when I was, like, maybe around fifteen years old. I’d thumb through a few of them and you’re right @Mae- some were kinda’ cheesy, some were kinda’ good. Anyhoo, the book’s covers were lavish, pure escapist fantasy fun. Good stuff. I’d look at one or two, then I’d grab my usual copies of the latest Cosmo, Mad magazine, and a comic if it was one I was into, and then beg my mom to cover me on whatever I couldn’t cover on the cost (Cosmo was expensive then and still is to this day!).

It depicts the manipulation and abuse cycle she experiences regularly in an excellent fashion. It was devastating to see her realize how horrible he was just to fall right back in love with him again. Batman spoke so much truth to her in this episode, and he gave it to her brutally but with kind intentions.

Yeah it was a fun read but also at times rather harrowing, given what the Joker does to Harley. His manipulation of her while at Arkham is insidious and her naivete and good-naturedness shows her to be a kind and loving person, but misguided and manipulated and ultimately emotionally and physically abused.

So agreed with your thoughtful take on early dayz Harl here @Mae. It’s difficult sometimes to read the Harl/Joker stuff from back in the day as she’s so steadily victimized during a large portion of her early run with the Joker. I’ve got my own reasons for my deep disdain for his character, cuz, well, y’know: 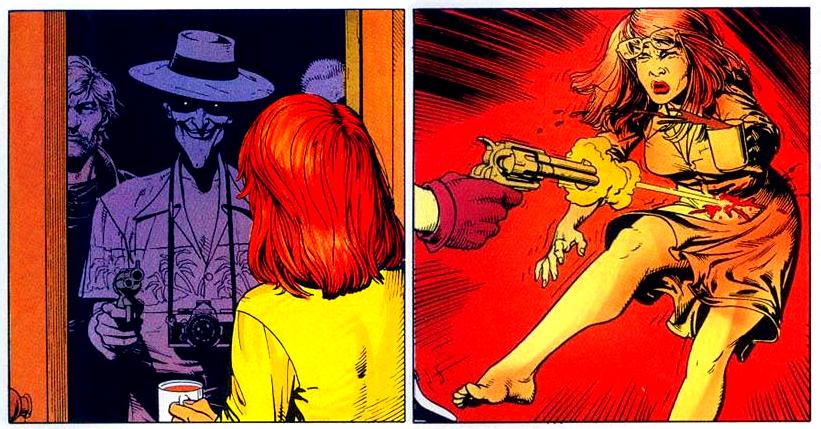 Yet nowadays I love watching Harley thrive in her healthy space of mind and look forward to seeing her continue to set her own pace when it comes to all aspects of her life.

As rough as Killing Joke was for Barbara, I miss her days as Oracle. I always thought that was a great direction to take her character- that she was so focused and determined that she refocused herself and became so valuable in the fight against super criminals that she became a member of the JLA. Joker couldn’t look and smile at seeing something he broke, because try as he might, he didn’t break her.

Amen @TheTerribleToyman. Triumph is often borne from tragedy and Barb’s time as the ever amazing Oracle not only propelled the Bat-Family’s intel-gathering apparatus to new heights, but Barb’s time in the chair also served to embolden her resolve and strengthen her steel at the most elemental of levels. As is always the case with my gurrl nothing stops her from reaching her objective once she sets her mind to achieving it- Nothing. I. Just. love. her. SO. VERY. much.

I feel like this is me whenever there are club discussions… oh well! It may be almost last second, but better late than never I say!

So, this is actually my first time reading this book! I’ve read bits and pieces before, but for some reason I never read the full thing, but oh man did I love it. I love the fact that Harley basically just casually outwitted the Joker—like it shows that she’s much smarter than anyone gave her credit for, but she’s so blinded by her love for the Joker that she’s just contented herself with following his schemes despite having her own ideas. Bats said it himself: she came closer to killing him than Joker ever has!

Seeing Harley realize that maybe the Joker doesn’t love her, has lied to her since the beginning, was so heartbreaking to see. This story showed how toxic their relationship is so well, especially with how Harley kinda of went full circle by going back to the Joker at the end, despite how he treated her. I just. AGH. I loved the writing! Not to mention Bruce Timm’s art, oh man. Everyone loves it, obviously. 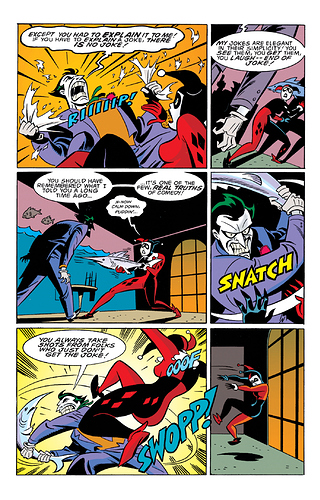 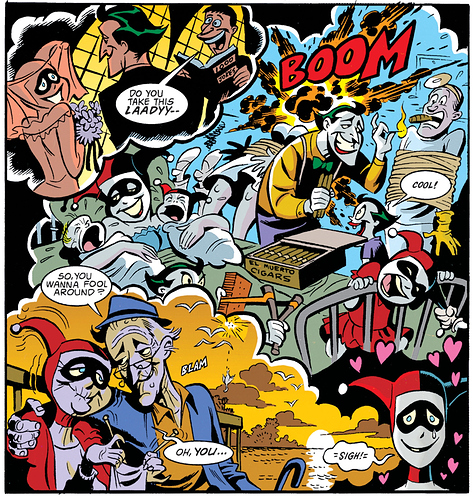 Overall, I really enjoyed this book and I’m so happy I finally read it!

P.S: @Jay_Kay, it seems like I’m gonna have to pickup the deluxe edition myself, it sounds too good to pass up!