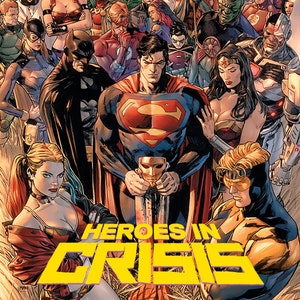 If we kept with the four books a week that would leave just a single book left so this round we’re going to read books 5-9.

So overall, there’s things I like about this story. I like a lot of the characterization here. Some of it feels like it was made for the book – while I haven’t read a lot of Gnarrk before, I get the feeling he wasn’t quite as philosophical before – and some of it feels authentic to the characters we’ve seen in the past.

Probably the most controversial thing about the book is Wally West and what happens to him here, and honestly…I kind of like it. I like how it plays on this meta thing that was done with Wally since the start of Rebirth, where he is portrayed as a sign of hope coming back, but what’s the point of that if his hope is gone in the form of his family? It definitely leaves Wally in a darker place, but I think it works, even if how things are resolved really doesn’t make a single lick of sense.

(An interesting thing is that some rumors going on around this time was that this story was going to push Wally to be the leader of a new Suicide Squad book written by Brian Azzarello, but I guess they decided to do Flash Forward instead.)

(Another interesting thing is that they’ve already retconed part of what happens with Wally in Josh Williamson’s last arc of The Flash. There it’s revealed that Reverse Flash was getting into Wally’s head, and he influenced Wally to hide the bodies and do this plan.)

Another great part of this story is the art. Clay Mann does some great shots, but Mitch Geralds, Jorge Fornes, Travis Moore, and I’m sure there’s a couple others I’m missing, do stellar work.

One thing I realized I don’t like about this book, something I don’t think really works at all is Sanctuary itself. While the need for anonymous is very important for these heroes, the method here of having them just talk to themselves really doesn’t work. It’s obvious that all it does is make the people stew over and internalize the bad thoughts and self-destructive behaviors that they’re trying to fix. I thought reading through it that this was going to be the point and at the end we would have had something like a group of our heroes talking to each other and supporting each other, but no, they literally just do the same exact thing they did before.

So overall…I think this is definitely King’s weakest work, I don’t think it quite sticks the landing, but I don’t think it’s anywhere NEAR as bad as some people make it out to be.