The first discussions from the last two weeks went so well that we’re going to be adding a third discussion for weeks 3 and 4 the Harley Quinn Solo Series from 2000! 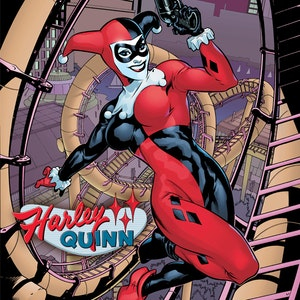 Gonna finish this soon! I’ll be back! But while I’m here, I’m curious.

Have you read Harley’s Solo Series?

I had to put “other” cause I haven’t yet, but I really want to soon. I just have not had a chance yet

I remember when this series debuted in 2000. Bear in mind, this was years before Harley exploded in popularity, when she was seen as Joker’s hench and not much more.

I questioned how Harley could anchor her own book and upon deciding I wasn’t interested in solo tales of her at that time, I passed on the title almost entirely (minus #2, as I am a Two-Face fan, afterall).

Years later, I was more into the idea of solo Harley, so I decided to jump into this series.

My reaction then was the same as it was upon this recent re-read: mostly disappointment.

The artwork is beautiful, but that’s really the only thing these early issues had going for them.

The writing is uneven, which emphasizes my idea that at the time of its creation, nobody was sure where to take Harley on her own, as solo tales with her had not yet been done in the comics or other media.

Ultimately, these issues fell flat in the writing arena, but absolutely excel in their art. The Dodsons are true artistes and then some.

SN: I think the first series to star Harley that worked was Gotham City Sirens. Sure, it’s not a solo gig, but she stuck the landing, and then some, in that one.

Ok, SO.
Its been a while since I’ve read this series. I remember thinking it was decent, but that it didn’t quite feel like Harley, and was too “cheesecake.” My opinion hasn’t changed much. Some people know how to write her, some people absolutely DO NOT. This one falls in the middle for me.

if I’d have given it a shot the first time around?? Artwork MATTERS!

It can sometimes make or break a story. Here, while overly sexualized, its dynamic enough to help keep things afloat a bit, even though, Harley doesn’t quite have a solid voice and characterization, like we’ve seen in other runs.

@Vroom makes a great point: She was still a fairly new character when this came out, and they weren’t sure what to do w/ her yet or where to go. That’s probably why something felt off.

Anyone else read it yet?

yes! while she isn’t exactly the Harley i’ve come to love, i’ve still highly enjoyed the series so far!

i don’t think it’s really what Harley should be, but i just love reading about her

and as it’s already been stated, the artwork is amazing imo
i may or may not be on issue 12

I remember thinking it was decent, but that it didn’t quite feel like Harley, and was a bit too “cheesecake.” My opinion hasn’t changed much. Some people know how to write her, some people absolutely DO NOT.

It’s uber cheesecake @Razzzcat. In issue No 3 Writer Karl Kessel and artist Terry Dodson essentially unearth every single inaccurate female stereotype that they can and shoehorn them all into every single panel of the book. The trope selection ranges from ultra suggestive anatomical poses, close up cheesecake shots, and needless overly suggestive sexual tension between the female characters via the book’s ham-handed script. It’s essentially every twelve-year-old boys’ fantasy of what girls do at a slumber party. The dialogue is a tapestry of campy one-liners, verbal catfighting that shows the female characters completely non-supportive of one another, and a decidedly apathetic attempt to build an engaging storyline. At one point in the story Kessel writes Selina launching into a very pointed diatribe brimming with hatred of men that tends to paint her as somewhat mentally imbalanced due to her unexplained disdain for the XY chromosome. It’s really kinda’ bad in every way. I snipped some examples of the more cringeworthy story elements and posted them below: 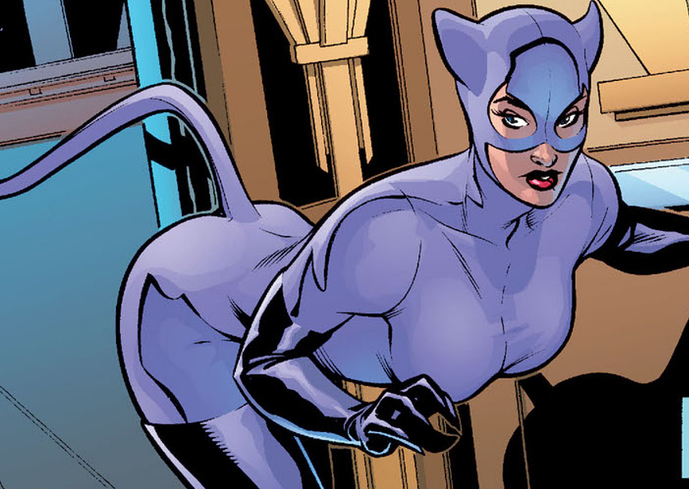 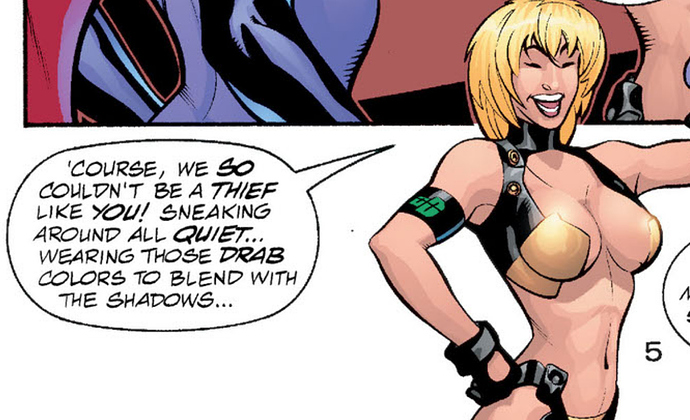 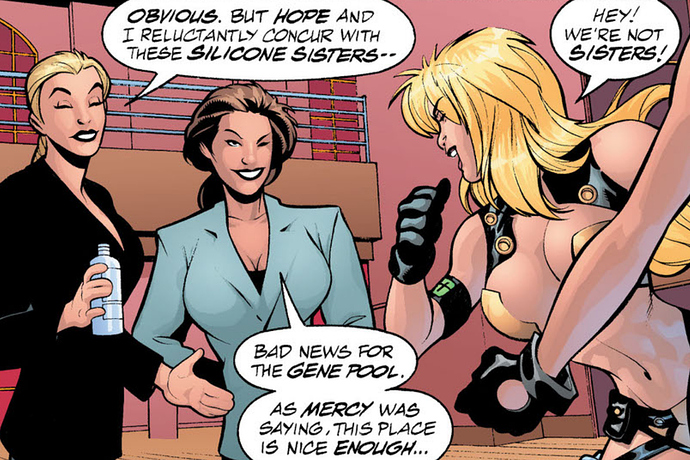 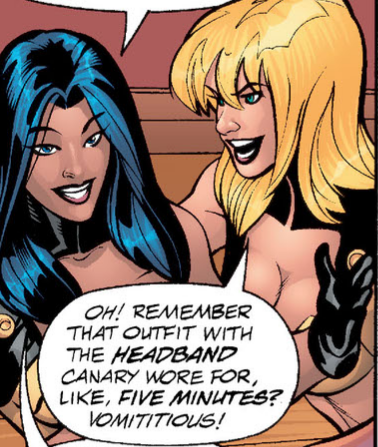 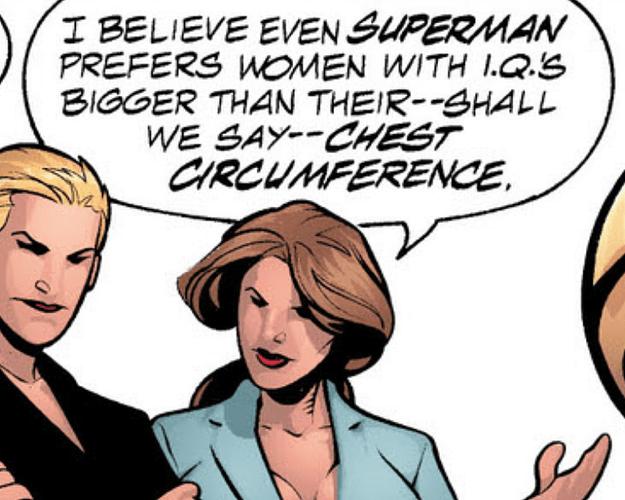 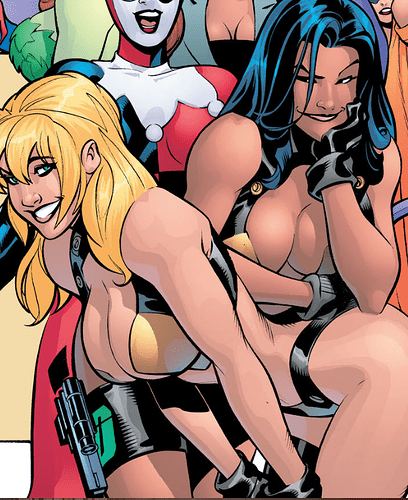 Upside: at least Pam’s at the party and does her best to keep Harl’s head straight while some of the other party guests try to encourage her to go back to Mr. J (Yay Pam!

Yeah, so a pretty cringey read here in most respects.

It’s essentially every twelve-year-old boys’ fantasy of what girls do at a slumber party.

The dialogue is a tapestry of campy one-liners, verbal catfighting that shows the female characters as fully unsupportive of one another,

Also #NAILEDIT. There’s definitely worse, but yeah. Not my thing.

Agreed with you as well @TheKateKane- Dodson’s artwork is very solid. Just wish he hadn’t gone off the rails so much with the over-sexualization.

gone off the rails so much with the over-sexualization

it definitely was unnatural at points, which is when i start to feel iffy about it. there were some very unrealistic poses

i also hated most of the dialogue in the sleepover. minus ivy, she is amazing

Just wish he hadn’t gone off the rails so much

Yep. Too much style, but next to no substance. Obviously, they weren’t sure who the audience would be, and time has definitely not treated this one kindly. Hasn’t aged well.

Unfortunately there’s still worse out there.

So I’m giving it a C

LOL I was going to quote the exact same line, perfectly stated!

i think that, as far as i’ve gotten, the sleepover is it’s lowest point. i’m hoping things will pick themselves up a bit. the storyline that inspired some of BOP is near the end, and i’m really looking forward to that

@TheKateKane- it actually does get better (I’m up to issue No 5).

I had just remembered why I stopped reading the series after the first two, it just wasn’t the storyline that I enjoy for Harley. The slumber party was a bummer, if anything I expected Harley to go all out, go do crime with the gals and not just play truth or dare in her hideout. They added Thorn there and gave her room to show her leaving with the delivery boy, I just thought it wasn’t really necessary to have her there

I agree with everyone, they just didn’t know where to go with Harley. One reason I think it’s because people probably wanted her with Joker and not solo. But, I will admit I was proud of my girl towards the end of the slumber party to want to focus on herself (how Ivy was proud of hearing that from her). I wish I enjoyed reading the first four a little more but it was pretty disappointing.

Don’t hate me, but I kinda dig cheesecake artwork. It has its merits.

And, uh, I never had thoughts of what went on at slumber parties when I was 12. Nope.

you should feel free to express your opinions here

you and i both know i didn’t hate it

I do feel free to. I don’t think anyone would toss me up against or through a wall for liking cheesecake art.

It’s a fun story, written by Allan Heinberg, who not only was involved with the live-action Wonder Woman movie, but also wrote one of my very favorite Avengers titles: Young Avengers.

I don’t think anyone would toss me up against or through a wall for liking cheesecake art.

i would happily let Harley toss me up against or through a wall as i like a bit of rough. i prefer puddin’ to cheesecake anyway.