Hey @Harleys-Crew! Got some news and activities lined up for ya, covering both our ladies for the next few weeks! Check it out. 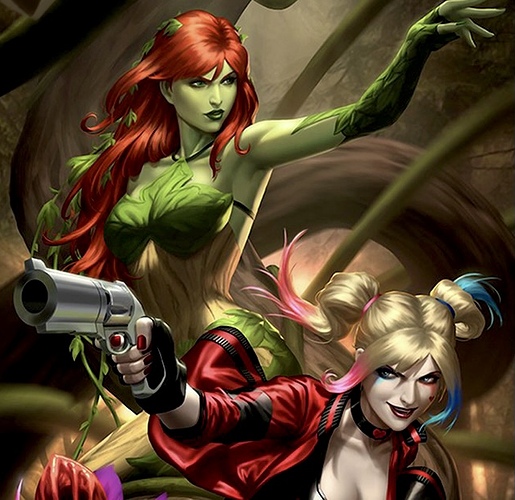 First: New books! We’ll be catching up on Black+White+Red, right​

Hey everybody! More issues of this awesome little anthology series have landed in our library—you know what to do.

‘What really is the perfect wood for a baseball bat?’ The answers to these Qs are not only welcome, …

Next: As you all know, Earth

Day is coming up—of course, the Crew will be spotlighting/celebrating our favorite Eco-warrior, Dr Isley.

Part 1 of those plans is MOVIE NIGHT!

Hey there! Another BYOM movie night is upon us, and this one comes w/ a plant lady, an ice man, a girl-bat, and a Bane!

Details below for anyone who hasn’t seen it, or if you’re new to watch-alongs… [image] Batman & Robin (1997) work side-by-side to stop the villains of Gotham City, but tensions are appearing between them as Alfred falls ill, and new villains emerge on the scene: Mr. Freeze and Poison Ivy! Will Gotham soon be a frozen tundra or populated w/ mutant plants? Who’s the …

In case you haven’t noticed a couple little annual tournaments going on (and some of us running around stirring the pot…in the name of sportsmanship, of course

) come by and cast your votes before the closing rounds end today! Harley & Ivy

are in the final for Dynamic Duos RIGHT NOW!!

(Final Round Up) Polls & Quizzes

[image] Heroes, Villains, and Everything in Between. This is the Championship match. The Tournament ends here. Who will be the best duo in the

Last, and most importantly: How ya been?!

What’s the bestest crew in all the land been up to? Causing all the good kinds of trouble, I hope.

Ps. Just in case there’s anyone out there who may have been dwelling under a rock recently ( @NCharles39! How ya been stranger? Good, I hope.

Day is this week—Dr. Isley’s favorite time of the year!

If ya got a min, let’s build her a playlist! What do you think Ivy would like listening to?

I’ll pop in for the Batman & Robin WAL for a bit.

Googles the above, hoping a poster of it is available

You know, I’m thumbtacking so much art from here and the Eye Candy threads to the walls that wall space is getting to be a premium.

This guy plans ahead!