Hey @Harleys-Crew! First up, like always, here’s the new round of activities: 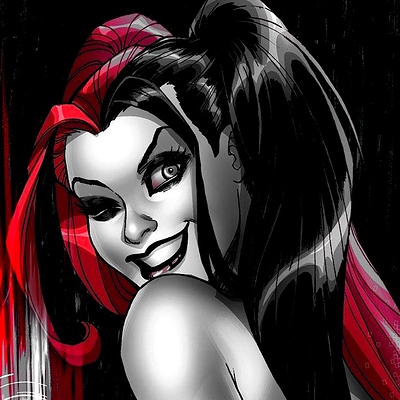 Welcome to Joker’s Asylum! A series of one-shots, narrated by the Clown Prince himself! [image] Joker’s Asylum l & ll: Joker Poison Ivy Scarecrow Harley Clayface We’ll be focusing on the

above issues, but feel free to read them all. Which was your favorite? Least favorite? What character do wish were included in the series? Looking forward to discussing this one w/ everyone, so don’t be shy. Drop your thoughts below! We’ll take the first week to read (1/18–1/24) an…

Harley Day WALs will be starting up next Monday @ 7pm right

HERE, and for anyone else who has been reading White Knight: Harley Quinn, there’s a discussion thread HERE. And last: Please vote on the polls and sound off w/ any opinions below…

Which HQ solo series have you read? And which one did you like most?

Do you want the Ayer-Cut of Suicide Squad? Please explain your answer below…

Which HQ solo series have you read? And which one did you like most?

To be clear, do you mean all the way through, or read enough of to get a feeling for?

Do you want the Ayer-Cut of Suicide Squad ? Please explain your answer below

Definitely – for one thing, I think it’s a great marketing tool for the next movie coming out later this year. “Excited for The Suicide Squad? Hungry for more of Margot Robie’s Harley Quinn? Check out the director’s cut of Suicide Squad, exclusive on HBO Max!” The only argument I can think of is maybe the cost benefit analysis, but then I doubt that Ayer’s cut of SS would cost more to finish than Zack Snyder’s Justice League.

Plus I’m just into seeing directors cut in general. Like I’m for the Director’s Cut of Batman Forever that was talked about a while back.

Read all. New 52+& Rebirth are basically a tie for me? Liked all (2000) probably have to go tie with Rebirth and 52 tho. Always for releasing the cut.

do you mean all the way through, or read enough of to get a feeling for?

Finishing an entire series isnt always in the cards, so I’ll take which ever you’ve got a feeling for.

And definitely agree. Good marketing, for the platform and for the new movie.

Hey buddy!!! DM me if u want about that BOP thing 0 rush. Just unsure if/where I would put those? Great work on everything great job

I should have seen it coming…

I’ve read the 2000 series, Gotham City Sirens, and a good chunk of the Conner/Palmiotti run.

Weird problematic bits aside, I really love the Sirens. I think that may be my favorite Harley.

Hey @capo-manger! I’ll be getting that BOP thing together very soon! I’ll DM ya first, promise!

@Razzzcat, I have read none of the above, but would like to.

@stalecake thanks for your help! That’s a great avatar, btw! Aren’t

you the one who made the bada55 Barda cosplay?!

Wasn’t sure where in our club threads to post this! Please move as necessary! 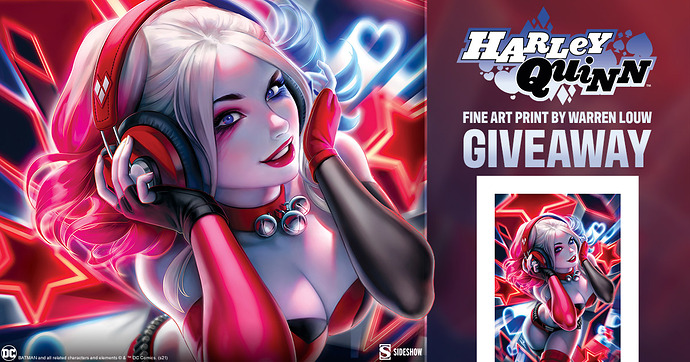 Enter for a chance to win a Harley Quinn Fine Art Print by artist Warren Louw.

Yep - Barda was my big 2020 project.
ATM I’m working on a slew of Harley’s. I’ve got two from BoP I’m working on, and a classic Harley. In the next few weeks I’ll be building her giant hammer/mallet.

So many cosplans and no cons.

So many cosplans and no cons.

Think of it as stock piling for future cons. You’ll be SET for years!!

Hey rockstar. Right on, on the BOP deal. Pops was in the hospital so I just got back on after an unintentional long break. You’re my 1st response on a very long list lol.

No worries at ALL! Just glad you’re doing all right—I missed ya! We’ll get to that glorious

goodness in no time.

Take care of you, and we’ll talk soon!

Come by one of our WALS, if you’re up for it.

will be joining us! (Here’s what else they’re up to this week!) [image] Harley Quinn & The Birds of Prey 1-2 You know the drill: wanna psychoanalyze the characters, discuss the artwork, debate the logistics of a fight scene? This is the place! We’ll take the first week (2/1–2/7) to read and start discussion on the second week (2/8–2/14). … 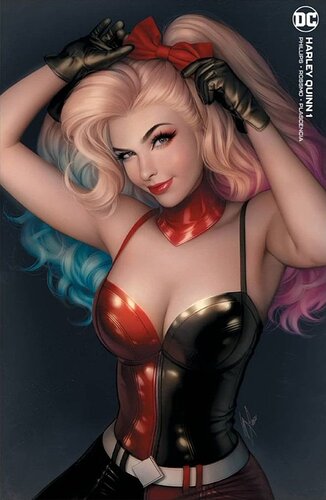