Hey there! This week we’ll be continuing DCSHG, and not only do we have crime fighting, but bunnies, burritos, and homecoming, too! Hope to you here.

PLEASE NOTE:
You’ll need your own copy/access to the show. Its available in 3 PLACES! On the CN App HERE
to rent right HERE or (w/ subscription)

Be ready to hit PLAY at the moment of truth and if you get lost, we got you—just ask and we’ll get you on track.
Rated: TV-PG, Runtime: 44 minutes

Contact @Razzzcat @Mae or @hashtag-goodtobejo below if you have any questions.

HERE. or Birds of Prey

I promise to stay awake for this round!

Sounds fun. Hope I can make it.

Been thinking about this since Monday night’s watch, and… this incarnation of DCSHG is basically just My Little Pony: FiM but with superheroes, isn’t it?

Bumblebee is a 1:1 redux of Fluttershy, Zatanna of Rarity, Supergirl of Rainbow Dash… Wonder Woman is sort of Applejack, but with Greek mythology instead of an American Appalachian folk background, and Batgirl is sort of a Twilight Sparkle/Pinkie Pie combo. I’m sure I’m not the first person to notice this.

Wonder Woman is sort of Applejack

I would say instead @Applejack is Wonder Woman

basically just My Little Pony: FiM but with superheroes, isn’t it?

Since Lauren Faust’s incarnation of My Little Pony was a huge success that reinvigorated the franchise’s interest among an entirely new generation of fans it kind of stands to reason that she’d incorporate many of the same approaches she used at the MLP shop with DC Superhero Girls. The show is an absolute romp of fun and funniness that parents can enjoy alongside their kiddos rather than just a scenario where the parent just parks their child in front of a tablet, presses play, and then walks away from a bonding opportunity with heir kiddo. I know my science is solid on this as this is exactly what I did when I babysat for my nieces on a weekly basis when I was working from home back in the day. The kiddos were pre-teen YOs then and I used the opportunity to strengthen our relationship via comics discussions and watching Teen Titans Go together. Fast forward to today, my nieces are in their mid and late teens and we absolutely love to text and Zoom to gab about comics and what the latest pulp page based news of the day is. Our relationship is as strong as ever in part because of time spent together with TTG, and I’m absolutely the positive the same will be said about DCSHGs.

At any rate, it seems like Faust has a winning hand here once again as the show is solid in its scripting, the voice cast roster is vibrant and engaging, and the animation is crisp, buoyant, and fun to watch. And when it comes to formulaic approaches to content creation more often than not Hollywood has always lived and profited mightily from this golden rule- if it isn’t broken don’t fix it.

I’m sure I’m not the first person to notice this.

Instead of overthinking it why not just sit back, get comfortable and enjoy the ride?

Instead of overthinking it why not just sit back, get comfortable and enjoy the ride?

Well, the thing about that is, overthinking is how I enjoy things.

I don’t watch Pretty Pretty Peg… I mean, My Little Pony, so I can’t join in on the conversation… 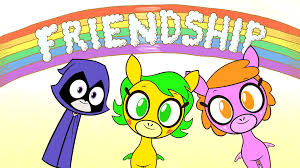 why not just sit back, get comfortable and enjoy the ride?

@HubCityQuestion I never would’ve pegged you as a bronie.

I enjoy this version of DCSHG more than the previous version. It’s irreverent, absurd fun, utilizing hyper concentrated versions of the characters to do it, and has just the right amount of positive messaging for kids/girls while introducing them to (eventually all) major DC characters. If one can handle that, they’ll enjoy it. I hope you’re one of them!

Sidenote: I’ve been watching it from the premiere in 2019, and a year ago I was talking about it (almost to myself). It deserves eyeballs on it. So HERE IT IS DCUI fam! Brought to you lovingly by The Crew & the Birds.

Ps. Everyone: Capitana (aka @Applejack) is named after something far cooler than MLP…might really be Wonder Woman, tho.

Ps. Everyone: Capitana (aka @Applejack) is named after something far cooler than MLP…might really be Wonder Woman, tho.

Obviously named after the cereal.

Is that your final answer?

I think it’s safe to say I should be able to make it on Monday! I love DCSHG dearly, after all.

Awesome! See ya then!