I was going to start one of those flaming inter-web fights I read about until I got to the end of your sentence. Calling off the slings and arrows.

I agree w/ @Jay_Kay & @iJest. His version of affection is obviously warped—he does a lot of these things the same way a cat brings dead things to humans they love…(the person he loves being Batman. Not Harley tho).

Maybe someday my opinion will change, but I don’t believe Joker ever loved Harley. At all. Depends on what version we’re going with, obviously, but my overall opinion: She wanted to save him, but she was something he wanted to break. It always seemed more like he formed his own dependency on her to perhaps boost his own ego. That’s not love. Part of it might be because he’s another one we could argue is coded and can be a bit asexual himself??

the way you love a Root Beer Float

Heres a thing I found… on topic n’ err’thing. 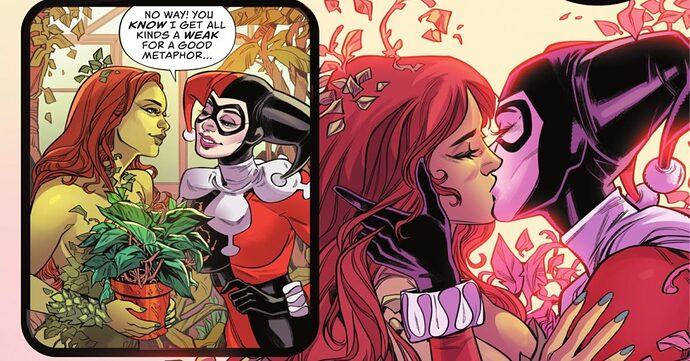 DC Comics has played hot and cold with Harley Quinn and Poison Ivy over the years. Made a couple in Jimmy Palmiotti and Amanda Conner's run on the Harley

They better not be messing with Harlivy!

Also, this is the perfect month to drop some peek sneaks into that HQAS comic that was announced!

They better not be messing with Harlivy!

They always do. sigh They generally won’t let any couple be happy, but this one in particular is barely even aloud to exist, so it sux even more, imo.

This is why I’m hoping this HQAS comic is just like a slice of life, cute domestic story, Harley and Ivy just living their life, cuddling and kissing, being cute together…

I hope so! I mean…I want them to do some crime too, but mostly just the hanging out bits in between will do! Like

what are they watching and talking about here?? I’m good with that!

lol it’s not hard to do! 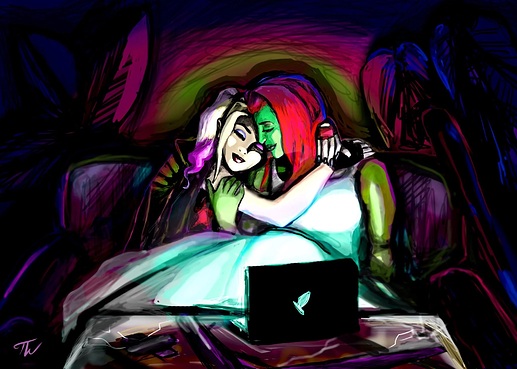 For anyone who does know what we’re talking about: 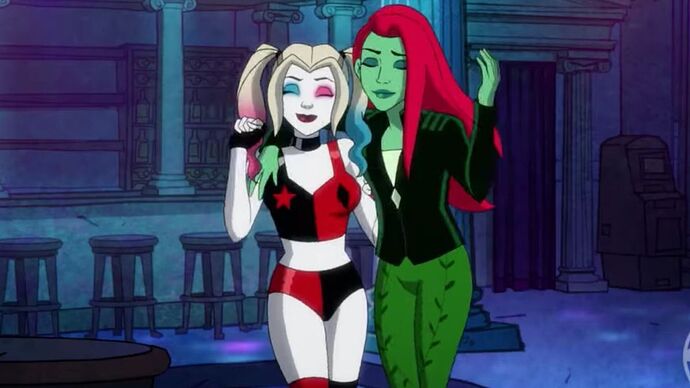 Harley Quinn and Poison Ivy will "Eat, Bang, and Kill" their way into new...

First, heart the title. So much! Sounds like it will indeed be raunchy and sexy! But hopefully also cuddly. Cannot wait!

First, heart the title. So much!

Can’t wait to check it out.

Now, Harley’s multimedia adventure comes full circle as Harley Quinn: The Animated Series gets a comic book sequel to the show’s second season finale meant to fill in the time before the upcoming third season.

Allow me to react to things one at a time so that I don’t get lost in my thoughts, lol.

The Controversy
My opinion here is anecdotal and based only on my observations. There is controversy because most people aren’t familiar with the comics, and most people only know Harley Quinn as the Joker’s (on-again, off-again) girlfriend and/or henchwoman. This is because generally whenever HQ is featured in some type of media they rehash her origin story. Much similar to how whenever we see Batman in a movie or something they call back to how his parents were killed by a gunman constantly - spoiler alert (

). It’s a media thing, to get the audience up to speed on who this character is. Without getting this post too saucy, we all know there’s a group of people who believe the Harlivy relationship just came out of nowhere to further an agenda. And as we millennials and similar-aged individuals continue consuming HQ-related media, I think this is slowly beginning to shift. HQ has always been popular amongst the age group that saw her first in B:TAS while we were children/teens. I think we are most likely to know that she is bisexual and has been separated from the Joker for longer than they were together by now. I think DC considers people of my age group to be the target audience for their HQ-related media and thusly will continue their Harlivy trend that we’ve been seeing. In short, the times they are a’changing.

Queer Coding
Oddly enough I remember learning about this term in relation to the Joker, actually! When I was an early teen and obsessed with the character, as I have been for the past ~19 years, lol. Anywho, the process of queer coding villains and other “bad” characters is something I find darkly fascinating. It absolutely shapes our understanding of what characteristics themselves are good and bad, especially for children who were the primary audience of comics and such. For example, the classic Joker is dramatic, flamboyant, effeminate, colorful, stylish, etc. and also extremely violent and evil. Oh, and also happens to be strangely obsessed with the story’s hero-- a man who is basically tall, dark, and handsome. Many of my favorite characters throughout my life of enjoying fiction have been queer coded. The end result is like media has to hide LGBT+ relationships/characters and can only hint to them, because they don’t want to lose viewership or have controversy. Believe me that I was so happy with Lego Batman because even though there WAS controversy and it was basically a version of queer baiting, we finally acknowledged Joker/Batman in a substantial way.

I went on a slight tangent. But I did have a point in there somewhere. I grew up feeling like LGBT+ people and relationships were not normal. It wasn’t in my media and everyone who was “coded” as gay ended up being bad. And it may not seem like that would affect someone’s development but it did. Poison Ivy may not always have been into Harley Quinn, but seeing them hanging out together in B:TAS doing everything except being girlfriends made it seem like having a girlfriend wasn’t a thing. (And here’s something else confusing, the previous generation like my parents STILL call my platonic friends “girlfriends” halp) They’re “gal pals” right? B:TAS wasn’t about romantic relationships which is fine, but there were plenty of heterosexual ones in that show. But somehow LGBT+ relationships are not suitable for children.

As probably a lot of us, I first saw Harley in BTAS and always felt cozy when she and Ivy were together. I feel like people making a big deal (negatively) out of Harlivy now are willfully ignoring her entire character history. 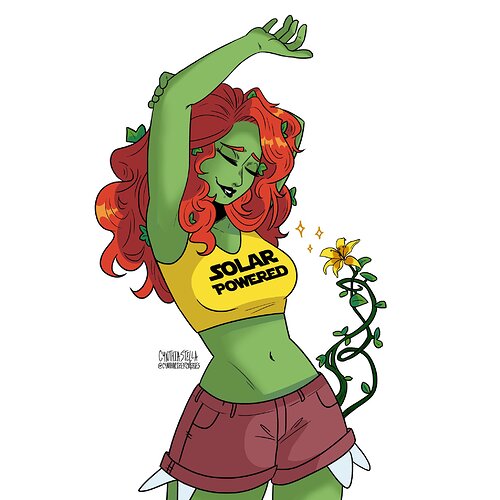 Just think about it as the bad alternate future we’re trying to avoid. I’m willing to bet that while some things have come to pass from it, there will be deviations.

They always do. sigh They generally won’t let any couple be happy, but this one in particular is barely even aloud to exist, so it sux even more, imo.

Yeah, the way they’ve sort of danced around their relationship in the past few years was annoying, but I do like that they’ve been up front and said they were a couple and Harley is looking for her. Really, nowadays it’s on the forefront of the Batman universe, with a whole chunk of the latest issue of Batman being about Harley, a new bisexual crimefighter who’s not sure if he’s into her or not, and Ivy’s ex-girlfriend talking about that relationship.

Hell, Harley and Ivy seem to be forefront in the upcoming Fear State event: 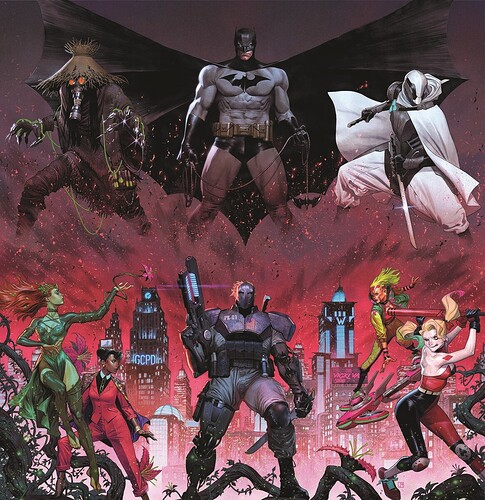 First, heart the title. So much! Sounds like it will indeed be raunchy and sexy! But hopefully also cuddly. Cannot wait!

Same here – the wait has been hard, but a comic series would soften the blow.

There is controversy because most people aren’t familiar with the comics, and most people only know Harley Quinn as the Joker’s (on-again, off-again) girlfriend and/or henchwoman.

I can attest to this. My parents actually watched the animated series as the second season started. Dad LOVED it and is looking forward to the next season, and my mom was surprised by the Harley/Ivy stuff because she mostly remembered her as Joker’s henchgirl.

I think we are most likely to know that she is bisexual and has been separated from the Joker for longer than they were together by now.

Has she? I think it’s been on-again-off again until about 2011 with the New 52, so that’s…ten years out of…almost 30. Huh, Next year will be the 30th anniversary of Harley’s first appearance in BTAS, that’s cool.

Oddly enough I remember learning about this term in relation to the Joker, actually!

Same here – I think I first learned of it when discussing The Dark Knight Returns and with that depiction of The Joker.

Believe me that I was so happy with Lego Batman because even though there WAS controversy and it was basically a version of queer baiting, we finally acknowledged Joker/Batman in a substantial way.

I honestly didn’t really like their take on it either – I don’t know, I just don’t like Batman actually buying into the bait like they have him do in the movie.

The only time I can think of where sort of playing with it worked for me was in the Batman: Endgame arc, but that was more of a ploy on Batman’s part, calling Joker’s bluff on being “immortal.”

There is controversy because most people aren’t familiar with the comics, and most people only know Harley Quinn as the Joker’s (on-again, off-again) girlfriend and/or henchwoman.

This is just more bi-erasure, in my opinion. People not understanding that bisexuality is valid