Harley Quinn Too Much Ship?

Hey guys! I’m finally back and I’ve caught up with Harley Quinn! As I continued to watch the show I’m just wondering do you think its focusing too much on the shipping with Harley, Ivy and Kiteman and the love drama? I mean the same situation happened on Star Vs. And look what’s happened to that show?
I still love Harley Quinn but I hope the shipping doesnt start to overtake it and ruin it. 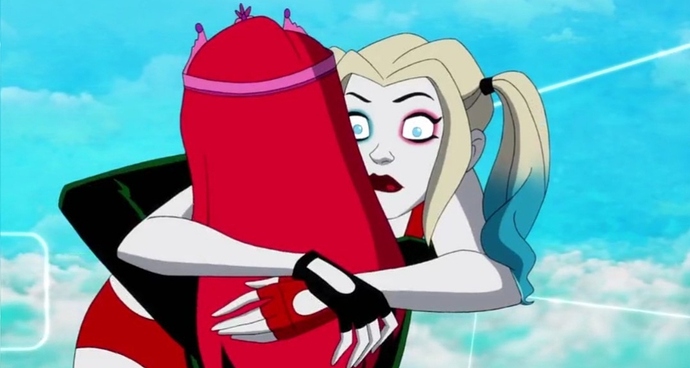 With all due respect I do not think there is too much shipping. I know for a fact that there are many people who appreciate when the show explores those avenues. I also believe the show appropriately straddles the line between too much shipping and and too little as it also focuses a fair amount on other characters of the show. Especially now with the addition of many new characters.

I love that Harley and Ivy are together. This show soooooo funny! I love it!

I agee w/ @king.hock. The show strikes a perfect balance w/ ALL the relationships, not just Harley’s. Every character is fleshed out, even cameos get great, well thought lines and action. I steadily laugh or let out tiny gasps—Expertly done, top notch entertainment as far as I’m concerned.

Hasn’t the entire show been about her relationships? Starting with Joker and moving on from there.

We get so little in the comics, I would love to see more of their relationship to be explored to the fullest

Hasn’t the entire show been about her relationships? Starting with Joker and moving on from there.

Excellent point, @ralphsix. The show IS called Harley Quinn so it stands to reason her relationships would be a big part of her life.

I’d like more of their relationship too @void_empress. We really only get breadcrumbs in the comics.

I agree I don’t think it was too much if anything it was such an important factor into Harleys growth so I am all for it!!

Relationships are a big part of Harley’s story. She’s coming out of this abusive relationship and since then she’s learned self love: A healthy relationship with herself, she’s developed real friendships and a real family with her crew, and ultimately a true romantic love with someone who treats her well and truly loves her back and who better than her best friend. When you think about it the core of the show is a love story between Harley and Ivy. And it’s just as much a story about Ivy learning to trust and to love as it is Harley’s. Both of these women come from damaged abusive relationships and they have helped each other overcome them. Ivy, who hated humans after suffering abuse from her father found trust and friendship in Harley, a human, and with Harley’s help she opened herself up even more to other relationships. Then there’s Harley who suffered abuse from Joker totally ignorant to what love is supposed to be because she never got it from her parents until Ivy stepped in and gave her the confidence she needed to get away from that and come into her own. Now both of them have discovered true love and how it really feels with each other and it’s like a shock to the system that’s both beautiful and frightening to them.

At the end of the day the show is about relationships, the relationship you have with yourself, friends, and ultimately what it truly means to be in a true romantic relationship.

I think the bigger question is.
Kite man or Harley ???

Harley’s very conception was as a partner/love interest. That’s literally the point of her, so I don’t see how there can be “too much” shipping.

At the end of the day the show is about relationships, the relationship you have with yourself, friends, and ultimately what it truly means to be in a true romantic relationship.

Well said. Without these heartfelt twists & plot points in a story, what do we have? Something I prob wouldn’t watch, I imagine.

I agree, the cast they choose was spot on for the characters and the fact that it’s a r- rated take on animation outside the Far East is refreshing. Plus, who would ever think

the cast they choose was spot on for the characters

. There’s not a weak link in the bunch.
Kaley Cuoco does have it down to a science, and dare I say, Lake Bell might just be the best thing that ever happened to Poison Ivy.

Wait…I’ll call upon some avatar twins & fellow HQ fans/WALers to confirm or deny this claim…and possibly add an opinion to the topic.

We know based on what the showrunners have said how things might turn out. I’ve been thinking if they wanted to give the K-man a love interest moving forward (S3 please), why not hook him up with Zatanna? Now that we know she’s around, i think it’s be interesting to see plus I’d like to see what kind of personality they’d give her.

Just a thought tho

I haven’t watched season 2 yet, but I can see where you’re coming from.
The show feels like a parody of Harley Quinn so I don’t really want that much serious relationships drama in my show. I think of it like a mature rated Teen Titans Go show but with some continuity. I just watch it for some cheap laughs and I laugh every time someone drops a f bomb.

@Razzzcat 100% Lake by far has been the best poison ivy

Plus if you didn’t know Lake has some

ad libs thrown in the show.

I honestly can’t picture anyone else voicing her

Agreed. Kaley Cuoco really does embody the essence of Harley Quinn, she does an amazing job.
Honestly, Lake Bell’s voice is not one I would normally match with Poison Ivy, but it works! It’s a very smokey or honeyed sound. Much deeper than I would normally imagine her voice, but it still very attractive (which, side note, I LOVE how she portrays Ivy as effortlessly sexy. She doesn’t try to be appealing, she just is.)