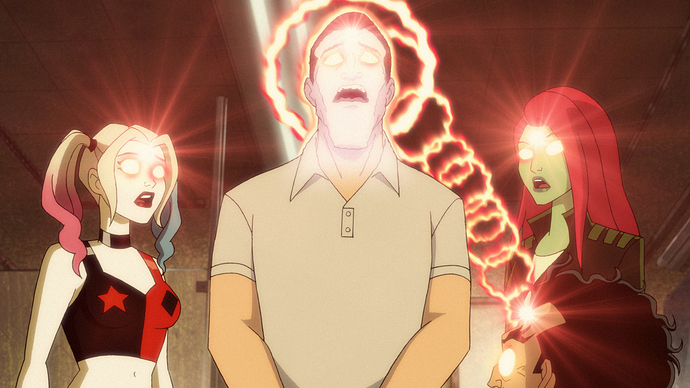 Well, we all wanted to know what happened to the Joker at the end of Season 1, now we know. He’s a “normie”. Or is he?

We got multiple origin stories in this one - another look at the origin of the relationship between Harley and Joker, an origin story on how Two-Face got his name, but the best one of all was how Harley and Ivy started their friendship.

If you haven’t watched episode 6 yet, make sure you do then come back here and let us know what you thought!

This was a great episode and exactly what I missed from last week! (No disrespect I promise)

Quite amazing how all the relationships have evolved and to see where it started was very cool.

But now they’re in the hands of Two Face and Bane so what will happen there?!?

I’m crossing my fingers for Red Hood to appear in season three. And it looks like Harvey is going to die next week. Can’t say I’ll miss this show’s version of him, but his mobster movie henchmen were a lot of fun.

Am not normally a fan of flashbacks, but this one was very strong. In particular: 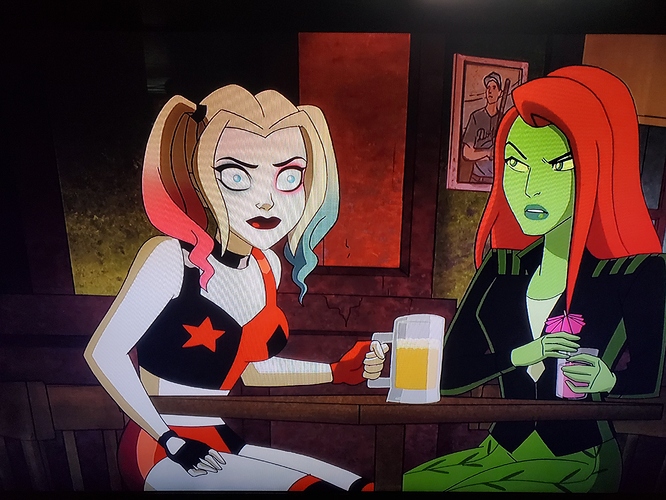 This show continues to be awesome.

Overall, definitely in the top 10 for me of the 19 episodes made available so far.

Another great episode. Can’t wait for next week.

This was a good filler episode with lots of character development and a good set up for the next one. all the pieces are finally in place now, Batman is back and now joker is back even though he’s not fully Joker yet, and Ivy and Harley’s relationship is developed even more.

I’m excited to see joker is back and I’m sure real joker will be coming back very soon. But I’m also nervous because I don’t trust Harley when Joker is around and she’s kind of confusing me right now and has me a little concerned in thinking that he’s changed. Harley you do remember that he killed your best friend last season right? I do love the little moment of Harley flinching when new joker reaches his hand out to help her up that was a nice touch and man are our girls so damaged.

Harvey Dent/ Two Face is slowly becoming one of my favorites. Two faced before he was even two face.

The flashback shed more light into the fact that the person that Harley was falling for was Ivy and joker just happen to be in the way. The moment joker started telling Harley of his tragic backstory of how he got his “emotional scars” ( which was a good touch by the way) I knew instantly that he was actually telling Ivy’s story of Mr. Ferris the Ficus. So really the person Harley had sympathy for all along was Ivy.

And Ivy oh my god, that woman needs to be protected at all costs lol. Between her story of Mr. Ferris the ficus and learning that the reason why she gave up on humanity was because her father hit her, Jesus that woman needs a hug and all the friends in the world. And such a sweet gesture from Harley to give her that little plant knowing that she damn well could’ve killed her with it. And then for Ivy to surrender to the officers but knowing fully well she could’ve done something given that she’s surrounded by trees in the forest but she did it to protect Harley. I don’t know why but the way she surrendered got a chuckle out of me.

I feel like a lot of the things that happen in this episode we’re definitely a set up for the next one if feels like it’s gonna be a big one especially now that Ivy and Harley are captured by two face. And according to the writers tweets this may be a clear defining moment for Ivy and Harley‘s relationship so I’m excited to see where it goes.

I’m looking forward to watching the episode and seeing what happened to the Joker. I know that they will talk about Harley’s relationship with the Joker from the beginning since it shows that on the preview. I hope it goes into Harley and Ivy’s relationship as well. This show has been so much fun, and I can’t wait to see what happens next!

Thought this episode was going to be about Harley and Joker but was a twist when it was really about Harley and Ivy. I guess Batman doesn’t let everyone ride in the passenger seat of the Bat-mobile. Looking forward to seeing what happens next and to see if Joker really is going to come back or not.

Omg Jason Todd confirmed!!! What about Dick and Tim?!

please and thank you writers)

You want to know how I got these emotional scars? 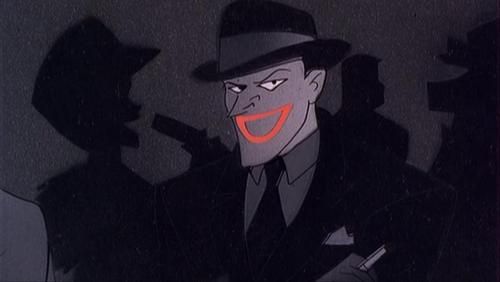 This was a great episode! I loved it! The reference to Jason! Dr. Quinzel! “Little Italy”. Felt like classic Batman. And the best part is that, even though Psycho did his thing the trepidation regarding Joker will never go away.

My favorite line from this episode that hit me hard was Ivy saying “You didn’t change me, you helped me.” For a show with so much raunchy humor and intense violence, there is such a level of heart.

This episode was reminiscent to Harleen. Loved the 2 face stuck in candidate mode. I love the Batmobile in this show. Poor Gordon wants Batsy’s attention so bad, wouldn’t even let him ride shotgun. Thusly (don’t say thusly) another great episode. This show can carry with any combo of characters. No Kiteman, Clayface etc…& still quality. Loved hearing another Joker origin. He needs a new one pronto (that’s Italian 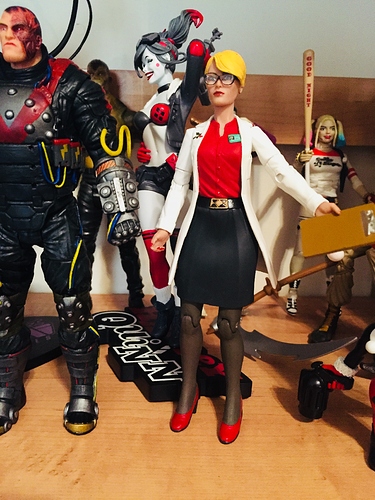 Fun episode but it’s pretty clear this was mostly just setting things up for what’s to come. Not the strongest episode on its own but if you love the chars (who doesn’t??), there was plenty to enjoy. Young imprisoned Ivy’s looks were a killer. Joker is always a classic. Dr. Quinzel’s moments with her clients were entertaining. I loved the nods to the was-it-ever-really-a-thing between Ivy and Joker too.

Wow. Truly a solid episode of Harley Quinn this time out. I really dug how the drama was paced like a comic in this chapter of the series. Lots of moving pieces to the story that totally drew me in- part comedy (Bats/Dent/Jim), part thriller (the bombing sequence at Arkham with Joker’s subsequent escape), part buddy story (Pam and Harl). Good stuff all the way around. 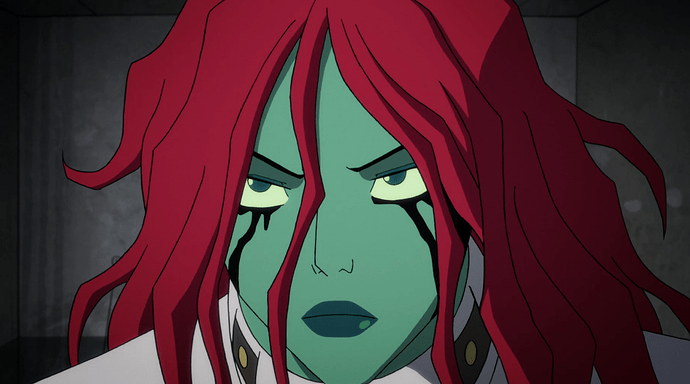 “F*ck off Narc!”
“You still alive? Guess I owe Riddler a twenty.”
Pam was the quintessential visage of badassery in this eps. Love. her. 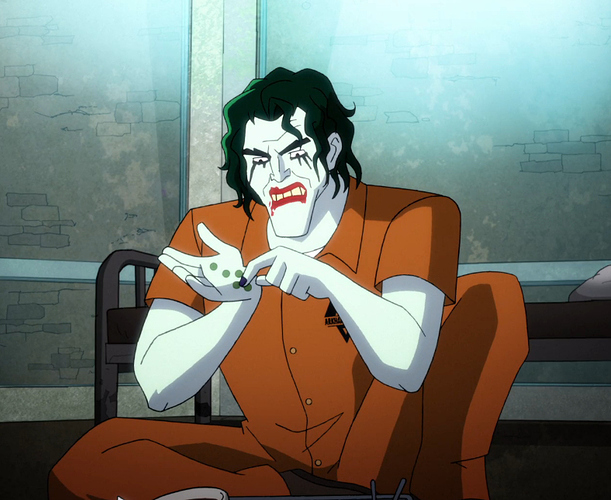 “I want to eat a normal meal like a normal person in a normal insane asylum!” Joker had some funny lines and some very compelling dialogue to deliver in this episode. Although it was another of his fake outs he did manage to make up a pretty intriguing origin story about himself this time. 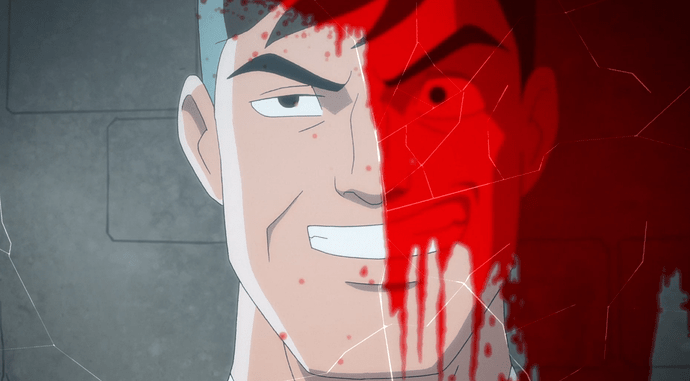 Harvey Dent’s unbridled greed for voter turnout rather than concern for public safety shows us that he had some baddie in him long before Maroni threw the acid in his face. Makes sense as he would go on to struggle with a huge angel/devil duality complex later in life. 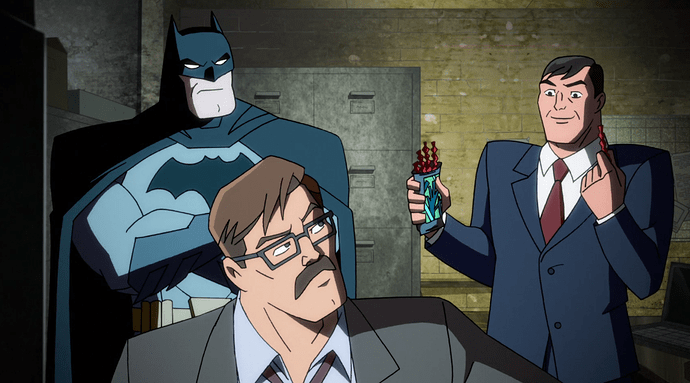 Dent: “Licorice Batman?”
Gordon: “I thought you were out?”
Dent: “I found more.”

Poor Jimbo. Just can’t ever seem to get that break he so desperately deserves. Christopher Meloni is sooo good as Gordon. 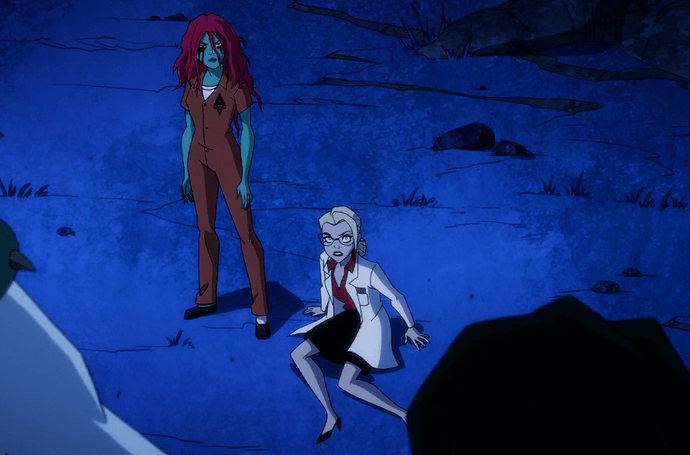 Really, really loved watching Harl and Pam’s first moment of bonding here. So good and so authentic. Now we can see how and why they were destined to become true BFFs. 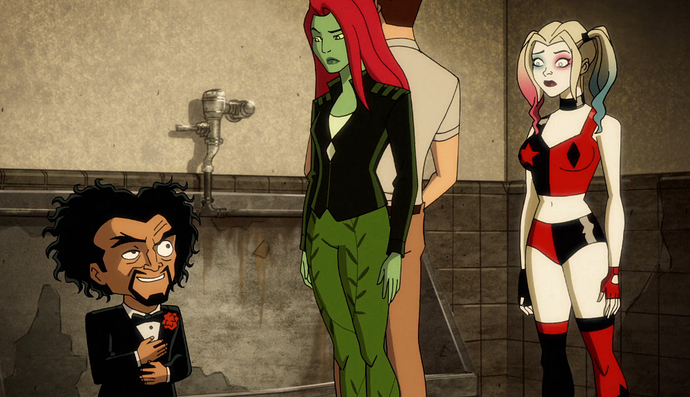 Pam: “Alright, alright, I guess I was wrong. I guess the acid did change him.”
Psycho: “Which is why I just smoke joints. Hahaha! F*ck you- that was good one. Papa needs his nap.”
Once again Psycho’s got jokes and they’re good ones.

Such a great episode. Thanks again team HQ. You bring it every time and I couldn’t ask for more- you totally ROCK.

This was a great episode! I really like when Harley Quinn slows down and focuses less on comedy and more on character development.

An extended flashback episode in the middle of the season? For a second, I thought I was watching Titans.

Oh, and it was nice to see that Gordon used to be fit, but never used to have dignity.