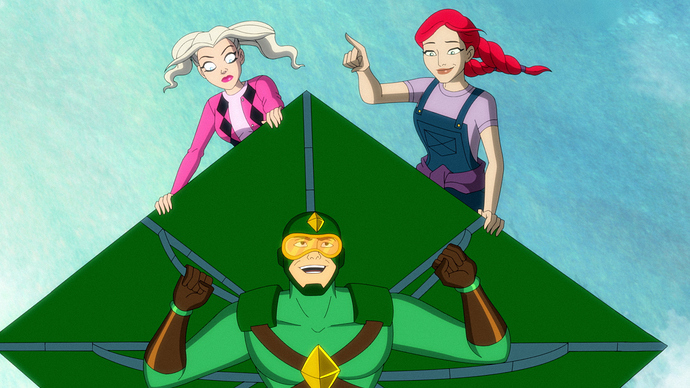 Welcome to Co-Ed Life! We’ve got campus tours, acapella groups, frat parties, and…The Riddler? What more could you expect from Riddle U, though? While Harley, Ivy, and Clayface (starring as Stephanie, the Uber Co-Ed) are all trying to track down the Riddler, King Shark and Psycho are on a mission for a water purifier. And let’s not forget…we’ve got a new superhero in town!

The animation on Clayface/Stephanie this episode was some of the best in the entire series so far! Love to see quality animation at work.

Barbara Gordon is a really touchy subject for me- I’ve seen so many people fail to “get” her- but this take on Babs feels like a very considerate take on the character. If I can’t have my Oracle, then this is the next best thing.

Also, really loved the “Warriors” style subplot through Two-Face and Bane territory with Psycho and Shark.

Another great episode. Interesting take on Batgirl’s origin. Wondering how far Gordon will fall before we see him take control of his life.

Clayface was killing me in this episode lol

Kinda upset they cut the dancing scene from the trailer with Harlivy and Ivy, but another great episode!! Now that Kite-man is back…where is frank?!?

I thought the exact same thing! I was getting heavy AC vibes from the last episode and this confirms it.

Jim Gordon is the hero we deserve.

…those aren’t even the chips you’re eating now—

Did anyone else love when they just so casually called her Babs? I loved it haha great episode. Clayface was a great highlight

Oh my goodness I was cracking up during this scene

Does anyone besides me think that Kiteman (Hell yeah) is going to ask Ivy to wear that outfit on roleplaying night? Or is that just me?

I went to school at a place like Riddler U. Gated in with all the power and a private security force amongst a chaotic land of crime and villainy.

Haha, jk, that’s a private school joke. I love High Point and the people too. They made me humble.

Harley and Ivy look creepy with regular skin tones. Like there’s something off about them but you can’t quite put your hand on it. They look way more frail.

That’s because Arkham City basically took most of its elements from No Man’s Land which is the inspiration also for season 2 of Harley Quinn.

“Chewin on water” eww the visual

Kiteman! and that joke was adorkably cute, Harley’s just jealous

“Bring back the useful degree one that guarantees gainful employment like art history” I felt that, good joke lol

“Harley Quinn and Poison Ivy, I know, gee I wonder what gave it away!”

I love awkward Batgirl and I love the nickname “Babs”

I’m really glad they didn’t kill Riddler and just decided to make him their b*tch especially because riddler and Ivy did do each other a solid. I would’ve been sad to see him go.

Great episode can’t wait for Gotham sirens next week. Catwoman is making her debut and should be a really interesting episode since Ivy just thinks she’s so awesome. Harley’s got competition for Ivy’s attention and it’ll be interesting to see Harley play the voice of reason this go around.

Cool episode. Loved Clayface here. He truly took method acting to another level, and it was amazing.

And I need more Gordon. He’s just so pathetically sad that it will be great when he gets that confidence back. Bab’s origin was pretty cool here. I can see how well she’ll get along with Harley and Ivy, and I can’t wait for it.

On the topic of Harley, I’ve never related to her more than with her reaction to Kiteman.

Looking forward to who the gang takes down next.

So excited for this season!!!

Can’t wait to see Batgirl, Catwoman and Bane having some power (poor guy always gets the folding chair).

Kiteman is still around and going strong with Ivy!!! Shocked with many question…