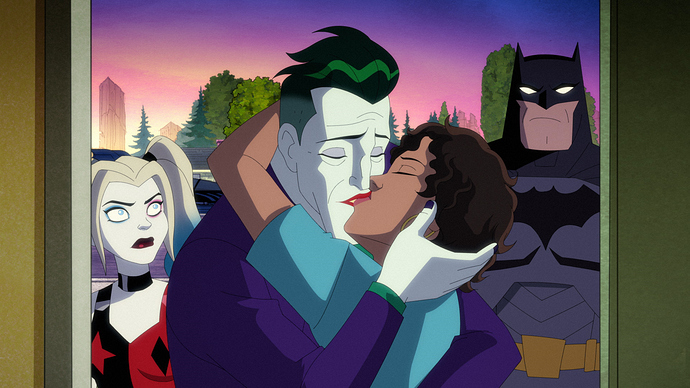 With the help of Frank, we already got our recap up to the point when Harls pushed normal Joker into the vat of acid, so let’s pick up from there. Joker’s back, but Harls isn’t falling for his crap. She’s on a mission to retrieve the Queen of Fable’s storybook to free the Justice League in the hopes of defeating Psycho and Riddler and their parademon army.

We had epic fight scenes, a stunning revelation from Joker, Ivy in her wedding dress, and so much more.

That ending though! Joker is IN LOVE? And he’s actually trying to help convince Harls that she should be fighting for Ivy since she loves her. What alternate universe have we stepped in?

Harls agrees, just in time for Ivy to show up at Bethany’s house and declare to Harley that she… (gotta watch the show to know!

Eh, it’s my least-favorite episode of the season so far, but I guess we need to get the plot moving. Can the Joker maintain true love when he’s in Joker mode?

I love that EgotforHarley.com is a real site.

I’ve already said enough about the kivy \ harlivy situation so I’m going to wait until the finale before I say anything more about it.
I’m surprised that I agree with Joker, at this point everyone is a better psychologist then Harley but to be fair they do say doctors make the worst patients.
I didn’t think they would use the Joker/Bethany relationship in this way. I thought it wasn’t important but instead they used it to emphasis the idea that everyone deserves true love and that there is someone out there for everyone as long as you are open to it. But what really surprises me is that by using Joker in this way, they are changing the narrative. before it was Joker is a horrible, toxic guy and Harley is better off without him but now, they are saying that Joker is bad for Harley but Harley was also bad for Joker. 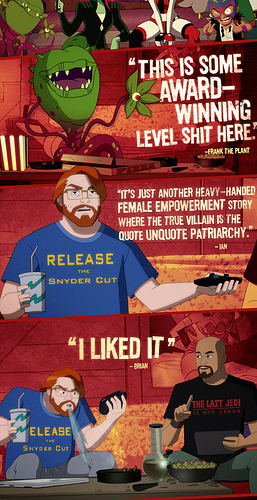 “Look at how intricately woven this storytelling ■■■■ is!”

Frank’s monologue is chefs kiss and he is right per usual, and about so much (#EGOTforHarley). There’s so much coming together for another epic finale. Only two more weeks!

So many great moments before that ~rude~ ending!

I didn’t know how to feel about this episode but I got down instantly were it was heading and leading up too.

I loved it tho​

Not gonna lie I enjoyed seeing joker in this episode,
Seeing Harley and joker basically agreeing that the relationship they had was toxic

Harley still having that fire of not letting go surprises me everytime and ivy still is in denial but seem like she’s starting to realize she can’t keep the act up anymore.

Glad to see the justice league are back .
Pretty slow burn episode, next episode will be seemingly epic.

Basically what she said was “Go to Hell.” (Carajo is crow’s nest but it’s also used as Hell)

And then at the end, and you my love? 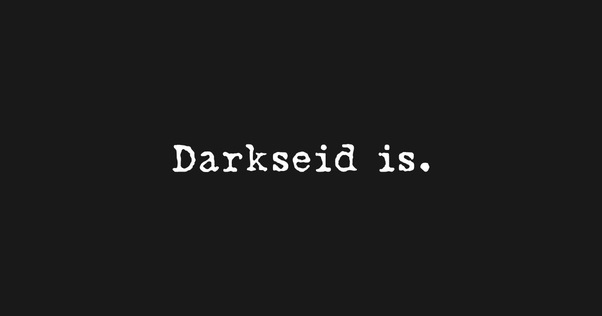 late for a business meeting!

Harley and Joker taking on the Parademons was pretty cool. I can’t believe there are only 2 more episodes in the season. Looking forward to seeing how Harley deals with Ivy being mind controlled by Psycho.

Thank you for this service

Kind of a slower episode for me, but good nonetheless.

Think Harley was joking about the bomb in Joker’s head?!

Ivy looked bomb in that dress

Lake Bell strikes again - S*** nuts with a can! Hold my hair…

@Razzzcat intrigued to see what you think!

Painful week for sure!!!

Like what is going to happen… will Ivy actually attack Harley and will Harley fight back if so?!?

I remember seeing a preview pic of Ivy in that dress and thinking “her hair looks nothing like that in the cartoon…artistic liberty I suppose” and then she said “hold my hair”. That killed me haha

Inner Monologue Frank was great, as was the Joker storyline. I like how he’s still in character, just not as much of a jerk he was in the start of the series.

First of all the recap from Frank: Perfect.

So basically Ivy’s wedding to Kiteman is what Harley unleashing the parademons onto the world was for Harley. She’s running away from her feelings and using Kiteman (yes,using),to hide behind and avoid these intense scary feelings that she has for Harley it’s just not as apocalyptic as what Harley did (but I guess in a way Ivy’s impending wedding is an apocalypse of sorts) I don’t know what makes her think that a wedding and a piece of paper that says “you’re married” is going to change what she truly feels inside, what are you going to do avoid Harley for the rest of your life? You’re just changing the scenery honey not the situation.

Fate’s calling Ivy, and I need you to pick up the phone.

and this is the second time I said this but poor chuck lol. Ivy losing it because they messed up an 18,000 dollar Vera Wang dress and Ivy’s string of cursing followed the “hold my hair” bit had me cracking the f*** up.

Kiteman! thinks Ivy is rushing things and when he thinks you’re moving too fast you’ve got a problem. He is starting to notice something is wrong with Ivy and I half expected Ivy to say: “I’m fine, the bachelorette party was fine, me and Harley slept in separate beds!”

Joker coming back I think was handled very well and I was honestly surprised. I liked Harley and Jokers dynamic this time around. Glad to see Harley thought ahead about controlling him. Their fight scene with the parademons is officially one of my favorite fights hands down. Sooo surprised how motivating Joker was for Harley to go and fight for her girl. When I say SHOCKED…

And Psycho how does your backstory lead to the distaste for women? enlighten me please lol

Psycho mind controlling Ivy was a fleeting thought I had in the back of my mind back in episode 10 when he took control of Clayface and King Shark. And I just thought wouldn’t it be messed up to put the one person that Harley cares about more than anything against her. To not only use her as a human shield but also force them to fight, make Ivy kill her because Harley would never hurt her best friend. So evil.

And then it happened and then wow things just got interesting. Harley vs. Ivy is something I want but also really don’t want because this is going to hurt. I don’t know if I’m ready for next week. Harley has been hurting a lot these past few episodes and then Psycho went and did this. Good god.

Honestly I feel like “the power of love” is what’s gonna be the solution to this problem but I hope they don’t completely go to the clichéd route of Harley kissing Ivy and then everything is back to normal. I don’t really want this to just be a “quick fix” and done so easily.

Great episode the next one feels like a heartbreaker.

I remember seeing a preview pic of Ivy in that dress and thinking “her hair looks nothing like that in the cartoon…artistic liberty I suppose” and then she said “hold my hair”. That killed me haha

I know right? we were all gawking over the promo pic and then she snatched her wig I was dead

I never in my entire life thought I’d be invested in the Joker’s love life. Neither, I think, did Bats. Another killer episode.

I have always said that Joker didn’t change who Harley was inside (the rest of her origin in her first solo run proved that) all he did was pull it out. They’re both so toxic for each other because they bring out the psychotic sides of one another. They’re both sociopaths who have managed to develop weird relationships in this show and I’m living for it! I like the Bethany was plot twist