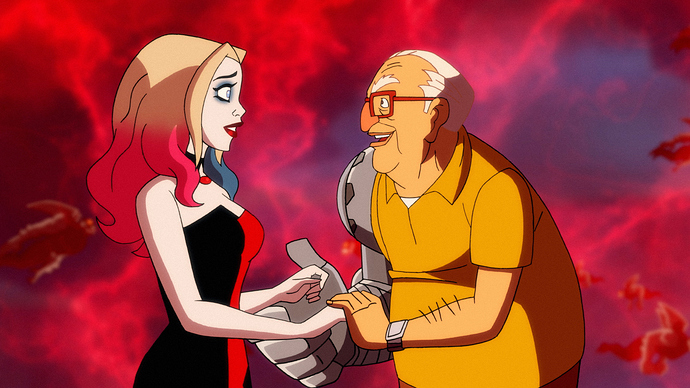 Well, that was all so…unexpected. To recap: Harley is definitely devastated from Ivy’s rejection, so, of course, she handles it with grace, aplomb, and maturity. Who are we kidding? This is Harls - you KNOW that’s not how she reacted. Sure there, was drinking with her now-sane ex, but he’s a normal bartender now, so no harm, no foul, right? WRONG.

We’ve got Psycho and Riddler teaming up to become the ultimate evil power couple, so what’s a lonely, heartbroken girl to do other than find her REAL ex. Oh, Harley…

However, we’d be extremely remiss if we didn’t mention the true hero of this episode - Sy. Rest well, our friend.

If you haven’t watched episode 10 yet, make sure you do then come back here and let us know what you thought!

Harley acknowledging that she needs to clean up her own messes and has now set herself on the path to so. Such growth. Hell yes. I’m proud of you.

the riddler is… hot. damn

Great material. Queen of Fables… possibly back in play…? It’s so well rounded tho. Props to all involved for delivering a great episode every week…Bravo!!!

great episode, I am actually happy Joker is going back to being insane. the important thing is Harley is not running back to the Joker cause she wants to she is doing it cause there is literally no other way to fix the mess she caused. after seeing this episode though normal Joker was really creeping me out, he wasn’t just a normal person again but a high functioning and decent member of society as well. Psycho went way to far betraying them, Harley might even kill him for this one.

Yes, Dr. Psycho is back. A Major role for my favorite character.

I found it weird seeing Harley get so emotional over Sy. She’s never shown that she cares about him before.

“I regret lots of things!”
-SY

Best line in the episode for me lmao

I’m gonna miss Sy. I’m hoping that we get an episode starring him in season 3 (if it happens). Maybe something set in the past when he was younger.
man Riddler is jacked. He is slowly turning into his hush form.
I’m surprised Psyco is back so early. I thought he would come back and do something in the finale Same with Joker. I knew he would be back but I assumed it would be later. I kind of wish Jack stayed around a bit longer. I feel that they could have done more with him and it was good to see Harley working through her feelings in a less destructive way.
The cancer ray was unexpected. Funny, but Unexpected. They definitely copied the idea from venture bros. So, overall a good ep.

There is only one negative I can think of and to be honest it isn’t really a negative for this specific episode. It is harley/ivy romantic development. I don’t want to dislike the two of them together so, I want the writers to make me want them together. I don’t want them getting together to just be an impulsive decision by the two. I know I am being overly critical but they only have three episodes left and there will probably be minimal development next ep.

Poor Harley not taking the rejection from Ivy too well.

Can we talk about how much growth she’s shown though? Wanting to clean up her messes and not involve Ivy in the dangerous stuff.

So the plot to this episode was a little misleading, Harley didn’t seek out new Joker and doesn’t want to be with him, Harley just went to Wayne Tower and it was just an unfortunate coincidence he was bartending there.

Harley venting in a vent “Jokesephineastein”

Gordon “ I’m not even doing anything”

Batman “ You get to hit the button”

“Just once I’d like to watch something where two people fall in love and experience no complications whatsoever. Oh and they don’t have sex till their married” why does this feel like a jab at the fans lol

I loved Harley acknowledging the messes she makes and setting herself on the path to clean them up herself without getting Ivy involved. And how does Harley start to clean up her messes? She creates another one with Joker, probably the worst one yet. Not because she wants him back but because she feels like she has to. And you just know that if Harley and crazy Joker are seen together by Ivy or anyone it’s going to lead to a lot of judgement and misunderstandings with everyone assuming that they’re back together not giving Harley a chance to explain at all.

I didn’t miss Ivy in this episode. After the emotional bomb in episode 9 I felt like they could use a break from each other. And I don’t see Harley running to Ivy anytime soon especially since she’s committed to not getting Ivy involved as she works to set things right.

Sy sacrificing himself in my opinion wasn’t as impactful as it could’ve been. It was sweet but it could’ve been a lot more powerful had we the audience spent more time with him.

We’re down to the final three episodes and sh**s starting to get real. We have crazy joker coming back, the justice league, Psycho,Riddler, and the parademons are the big baddies, Ivy’s wedding is right around the corner. It’s all coming together

I really dug this episode. It all the shenanigans I liked in season one, and I chuckled quite a bit. The cancer ray in particularly was hysterical. Sadly though, I don’t think I will continue after this season. I am just not interested in a heroic Harley. I think this character growth is done well and is earned. But the more heroic she becomes the less interested I become.

Looking forward to next week! Harley versus Parademons sounds fantastic.

I don’t know what shook me more, the ending to this episode or the earthquake earlier in the week.

Well Harley actually created herself. Joker just helped her along.

I meant how she’s the reason he stopped being the Joker and now is going to be back to Joker again.

Who knew Sy could actually get out of the wheelchair. Maybe this is the road for Harley to get a chance with Ivy. So cool to see Gordon fly the Bat-plane. Now on to save the Justice League.

Very interesting character development on Harley’s part. Learning from her mistakes, willing to clean up after herself. I’ve said on these boards before that I predict that Harley is gonna end up with Ivy by the end of the season, but after seeing this episode, I don’t think that’s gonna happen. I still stand on my prediction that Ivy will find out Kite Man is cheating and turn back to Harley, but, with the sharp shift in Harley’s character in this episode, I think Harley is going to tie a knot with…herself. She has a lot of character work to do. And the openness and willingness to do that work she has expressed in this episode has opened me up to new ideas. As much as I would love Harley and Ivy ending up together, saving nature, freeing female armies, having sex they can enjoy sober (unlike ahem) and so on and so forth, the new side of Harley I’ve been exposed to in this episode leads me to believe that she’ll probably fare best on her own for now, working on herself by herself. She became a strong, independent woman after she broke up with Joker, and I believe that a further enrichment in her character is necessary for her to healthily share it with someone else in such a deep way.

Man, I was hoping The Joker would stay normal. Let’s just hope Harley pushes him into another vat of normal acid so that he doesn’t end up stealing the spotlight again.