"Harley Quinn: Breaking Glass" isn't all that bad... or is it? 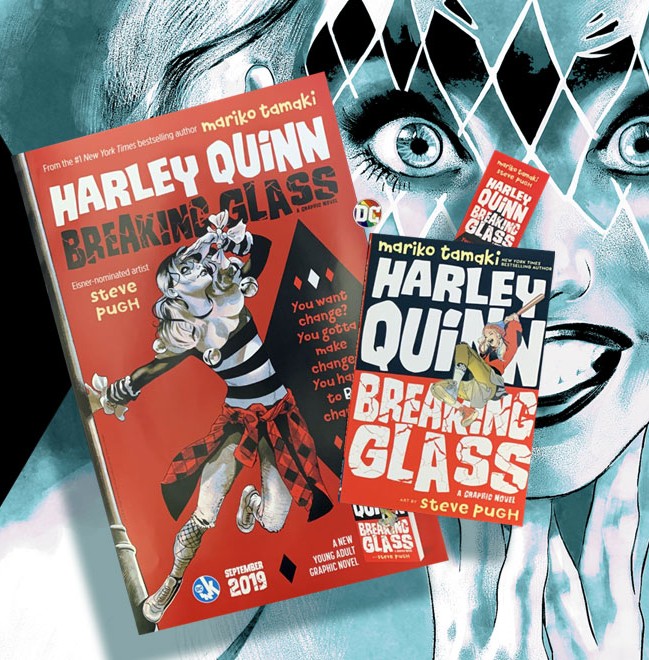 CRM_Sweeps_BlogRoll_HarleyBreakingGlass_5d549e6d602511.81880779649×660 164 KB
3 months ago, a DC graphic novel was released.
“Harley Quinn: Breaking Glass”, written by Mariko Tamaki with art by Steve Pugh. Aimed for young adults, I have to admit that I enjoyed this new incarnation of Harley Quinn.
This version of our Princess of Crime is a rebellious, open-minded, outspoken teenager. Attending Gotham High, Harleen face challenges of discovering who she is and what she stands for. Meeting Ivy and Joker has influenced Harleen and she’s torn as to which side to join, especially after series of unfortunate events in her young life. If you haven’t read this book yet, I’ll refrain from spoilers.
The art is amazing! I devoured every page for its uniqueness and panel of lovely colours. The storyline, however, isn’t what I was expecting. Not that it is a bad thing, HQ’s origin here took a new direction that we haven’t seen before and it worked! I think my dissatisfaction lies with the ending. I was left with an “empty feeling” when I got to ‘THE END’ page; I wanted more!
What do YOU think about this? Did you like/dislike it and why?
1 Like
GothamClerk359 January 5, 2020, 1:21am #2

I thought the book was a lot of fun! It had a great supporting cast, gave a great take on Ivy, really balanced out Harley’s eccentricity with her caring side. The story itself was fresh and different enough from past origins to hold up on it’s own and the art was very detailed and well drawn. I’m really looking forward to The Oracle Code and Shadow of the Batgirl.

I know you meant “Breaking Glass,” but now I’m picturing Harley teaming up with Walter and Jessie.

Thanks for bringing it to my attention!

Here’s the thing about Breaking Glass: everything about it is great… EXCEPT for Harley herself. I couldn’t stand her narration or dialogue. I was really only able to read the book for about thirty or forty pages at a time because otherwise I just got a headache from that voice in my head.

And it’s such a shame, because I do mean it when I say that everything else about this book is good. I liked the story, the pacing, and the other characters, particularly Ivy. The political messaging was on point (I love that the big bad is literally Starbucks), and Steve Pugh is just amazing at what he does. But, man, Harley was annoying.

I think they could have done a lot more, but I still loved it!