I’m a Maryland resident and I just learned today that Guy Gardner is a Baltimore native. I’d love to read up on our local superhero. Does anyone have any recommendations for storylines of his that might be worth reading? Thanks!

Best place to start reading is Gleason and Tomasi’s GLC. Basically it’s the modern redefining of Guy past all his crazy 90s stuff they did. Red Lanterns is great too, but I’d recommend GLC first, especially since there is a lot of other Lanterns you’ll get to know in that run too.

Yeah, I tried getting into Warrior when it first came out. It was a bit much, even for the 90s. Thanks for info!

My favorite portrayal of Gardner is from when he first comes out of his coma, during and after Crisis on Infinite Earths. It’s been a while since I read them, so I apologize if I miss a hint of his return, but he shows up in a good chunk of #195 through #200, and then continues in many issues of Green Lantern Corps, before eventually getting picked up in the better-known Justice League series.

The characterization slips in the last for the sake of humor (and it is a very funny book that’s also good), but the Green Lantern stories show Guy as angry that he was denied his chance to become one of the world’s most important heroes and, despite people knowing about him, was left to wither in a coma for years. He comes off as a creep, because he’s a guest in someone else’s book, but Steve Englehart makes sure that he’s also justified in his anger, even when he’s playing the villain.

I think it’s time for Guy to bust Bruce right in the chops. I’d buy that book!

You were right! I’m blowing through and loving GLC. Thanks again!

Side note: Early highlight was Guy pointing out that he’s an Orioles fan. He’s definitely working his way up my list of favorite superheroes. 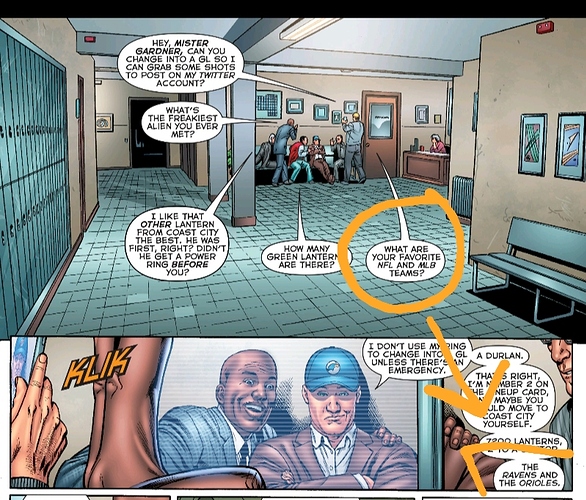 They were short, but he had somd nice moments in the Green Lantern 80th Anniversary special.

Hal Jordan And The Green Lantern Corps has quite a few good Guy Gardner scenes. This series made me fall in love with his character all over again. His fight turned budding friendship with Yellow Lantern Arkillo was amongst my favorite of the series.