Guess Who Said It

“Say one more word and I will strangle you, you wretched sonofa deer tick.”

Just passing the time! Feel free to join in and try to stump people with your own quotes.

I’ll reveal the answer tonight, for those who are interested.

Hmm…I’m torn between Jason and Damian. Damian has threatened to strangle a lot of people, but I don’t know if “deer tick” sounds right from him. Or Jason, for that matter…

And who knows, maybe this is from some freaky silver/bronze age story where people said some weird stuff like that all the time, which would put it on Dick…

I kinda regret not throwing Alfred in there as an option.

I wanted to say James Cagney, but I guess he never even said it.

Thanks! Hope others join in with their own trivia. I wanna play too.

Ha! I can definitely hear “wretched sonofa deer tick” in his voice.

“The acrobats are for Fatso, who ought to exercise more…”

“Maybe they needed a vase”

(starting with an easy one…)

I had to guess with arkham’s trivia, but with SuperBlueGrodd’s I was very much

It’s a great episode… especially with the inclusion of Ralph… and y’know, the story was good too I guess

“What is this, code? I’ll decipher it in a minute.”

The Superman villain who called a kid “Fatso” was…Toyman! It was a prime slice of Golden Age cheese that Toyman said in his debut issue - Action Comics #64. I can’t seem to see who chose what option for some reason, but I can see that only 1 person voted for Toyman, making him the least popular option 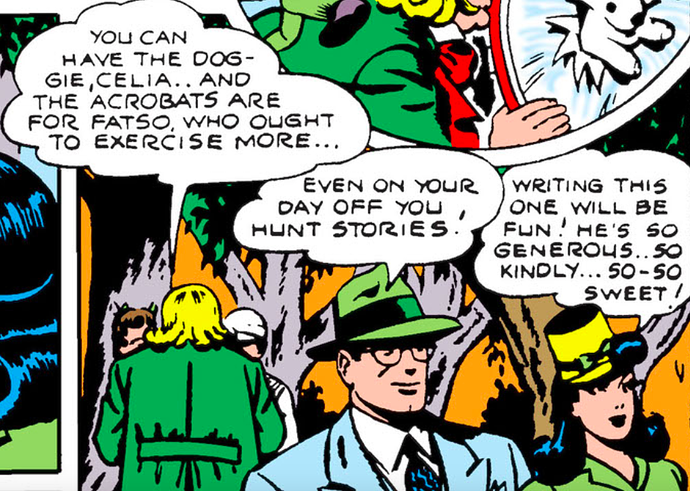 Oh yeah, mine closed too… and the answer is… Skeets!
In the JLU episode “the greatest story never told” (Ep. 7 season 1).

As for the first one, the answer is…

Tim Drake! From issue #114 of his '93 run. I thought he sounded out of character in this one, but to be fair, he had just failed to rescue a small boy who died a really horrible death, so he was stressed. It was a weird four-part storyline.

He’s the last of those 4 I would’ve guessed. Well done