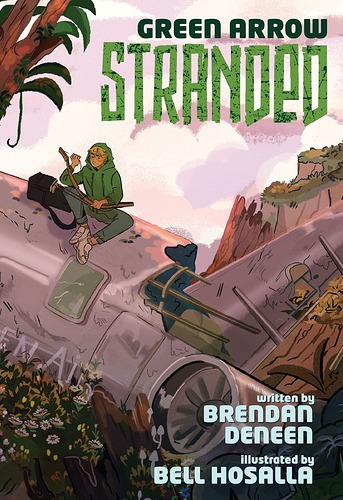 Thanks to the smash hit Arrow, Oliver Queen’s origin story is almost as well-known as Bruce Wayne’s at this point. Green Arrow: Stranded , a new graphic novel by Brendan Deneen and Bell Hosalla, is an all-ages retelling of Oliver’s time on the island in his formative years. It’s a story of survival and hope that reminds readers of any age that fear and bravery always go hand in hand. And it’s gorgeous.

As the story opens, thirteen-year-old Oliver Queen is flying home with his father on the family’s private jet. The tension in the air can’t be ignored. Oliver and his dad are at odds, but a sudden lurch of turbulence derails their discussion. The other passengers in the plane, friends of the family, tease the shaken Queens—and then the plane is struck from the sky by an errant bolt of lightning.

Oliver opens his eyes on a deserted island.

To learn more about Green Arrow: Stranded, head over to DC Comics!

Have you checked out Green Arrow: Stranded yet? Let us know your thoughts in the comments!

Have you checked out Green Arrow: Stranded yet?

Not yet, as I’m still reading the Mister Miracle OGN, as well as House of El Book Two.

After those are done, then I’ll fire one off for GA.

I received a digital ARC, and really, really enjoyed it.