I want to get into the team of DC superheroes the Outsiders, but I don’t know what stories to check out. Since Batman is a leader, of course I want to see some Outsiders stories because of it. Mainly stories about the origins of the Outsiders.

Mike W. Barr is one of my fave writers and so I was a big fan of the original 1983 series Batman and the Outsiders.

And of course, the preview that can be found in Brave and the Bold #200.

The Outsiders is one of those teams that bizarrely seems to fly under the radar, despite being featured in 6 different on-going series comprising hundreds of issues over the past nearly 40 years. I don’t think I’ve once ever seen a single Outsiders story show up on any “Best of DC” or “Must-Read Comic Stories” lists. Even Googling “Top 10 Outsiders stories” or “Best Outsiders stories” brings up nothing. Surely there must be some good stories somewhere in all of those hundreds of issues. It makes me intensely curious what (if anything) everyone is overlooking in those books. I do intend on checking them out… someday, after I’ve read the 10,000 other things that I want to read first.

There are echos of that team in this version

Nightwing instead of Batman

Shift has a relationship to Metamorpho, what it is exactly, we find out later. This version is better.

I really hope that Thomas gets the nod to do a full, longer miniseries or ongoing on the title!

The original Batman and the Outsiders series from 1983 (aka: BATO) is the best place to start, if you’re interested in learning more about the original team. The stories are short by today’s standards - mostly single issue and two-part stories - so you can read them rather quickly. Mike W. Barr’s writing is definitely “old school '80s,” but the stories are fast-paced, charming and feature a lot of melodrama and subplots.

And, importantly, the artwork by Jim Aparo, and later by Alan Davis (some of his first work for American comics), is gorgeous!

The whole series (minus BATO Annual #2) is available on DCUI.

Note: the Outsiders actually debuted in Brave and the Bold #200 as part of a special preview story; however, this story actually takes place between two early issues of BATO. Also, after Batman quits the team, the book’s title became Adventures of the Outsiders. 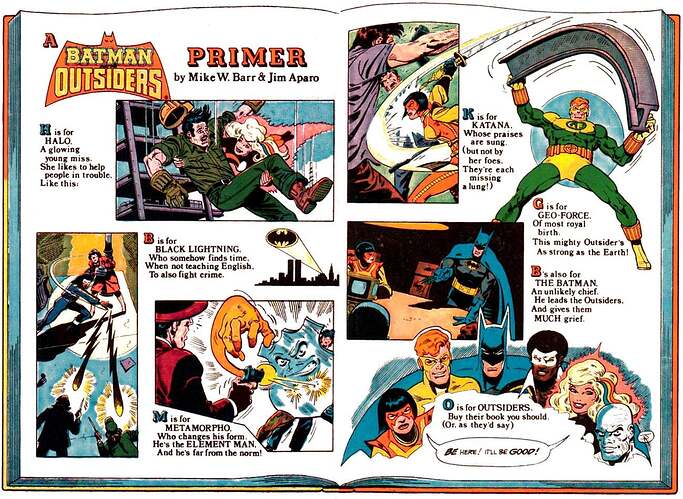