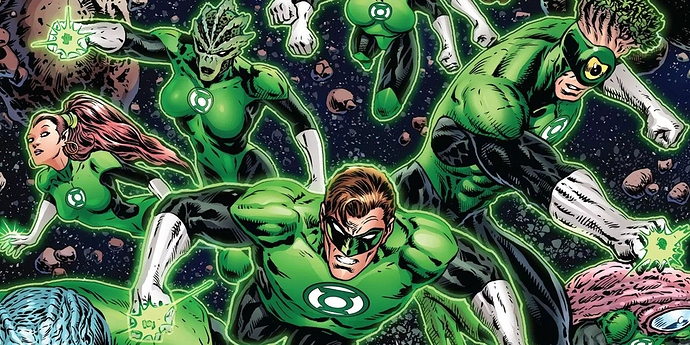 The Green Lantern artist Liam Sharp says writer Grant Morrison will likely concentrate on his own material after Season 2 ends with Issue #12.

So no Wonder Woman earth one vol 3? Huh

Uh…I’m not going to say that he’s wrong or anything, but…Morrison’s done this a few times in the past. Like, I wouldn’t be surprised if he comes back in the next few years.

So no Wonder Woman earth one vol 3? Huh

Script for that was written a long time ago, it’s just a matter of Yanick Paquete finishing it up.

Grant Morrison is my favorite writer of all time. So sad to see this.

What’s left for him to do at DC? He will problay do that Silver Surfer book he’s been wanting to do for a while over at Marvel.

I know he’s got a lot of fans who will be upset if this sticks, but honestly I’m just really looking forward to the Green Lantern books going in a different direction. Hal is great, but I’ve never understood the decision to focus on him and sideline the other Lanterns, especially Jessica and Simon

dudes gotta have a few(hundreds)creator, original ideas floating around his head. And some tv scripts. Time for a DC break.

I think he’s great, but he’s also hit or miss for me. I’ve got this GL run and am way behind cuz I just can’t really get into it. And, never say never. Ten years from now, he may get the DC itch again.

That really sucks, I love his work. I will admit I’m not a big fan of his work with Batman, but his stuff like Multiversity, Doom Patrol, and All Star Superman is something that really can pick you up when your having a bad day.

I’m thinking/hoping he just means for the foreseeable future.

He loves the DC characters enough that I refuse to believe it’s goodbye forever.

I’m a fan. Sorry to hear he’s jumping off the DC ship. I’m currently reading his Batman run. I love it so much that I’m buying all three omnibuses to put on my book shelf.

I only read all star superman but I thought that was amazing, man it’s such a same such an icon is going to leave.

I imagine he’d return at some point! … def. miss his work though

I’m looking forward to a direction change for Green Lantern. That said, I’m sure Grant will be back eventually!

I saw yesterday that, Grant Morrison is one of the creators on peacocks new show, “A Brave New World.” Knowing this I’m stoked to check it out.

This saddens me, but I agree with what was said before: what else is there for him to do at DC?

I think of all the possibility just packed into every mainstream DC work he has ever touched, and from my perspective, far too much of the potential was ignored. I remember so fondly when writers built off of each other, and so many of Morrison’s stories really seemed like he was lobbing a ball across the net to the next writer in that same tradition, but that back and forth just isn’t as common anymore. While some other writers certainly responded to the ideas Morrison introduced (Waid, Orlando), it seemed to me as if far too many did not.

I will certainly follow his creativity elsewhere, but I can’t deny how much I will miss the extraordinary way he played in DC’s sandbox. I honestly don’t know if I would have even stayed a comic collector the last 30 years without his impressive output. He played no small part in the massive affection I feel for the DC universe.

Morrison lives life the way he tells stories: in a non-linear fashion. He’ll be back.

The guy is too full of ideas. When he thinks of something that interests of him in the DCU, he’ll come back. (and I’ll be waiting …

I saw yesterday that, Grant Morrison is one of the creators on peacocks new show, “A Brave New World.” Knowing this I’m stoked to check it out.

That may be part of why he’s stepping back from DC comics. TV projects beckon.

Never say never… especially with Grant. Even if it is his last work with DC, his influence on the characters and multiverse will last forever.