I haven’t been reading comics for as long as probably most of you, but I have found to really enjoy a lot of Grant Morrison’s work. So, I just wanted to ask your opinions about him as a writer.

How would you describe his writing style? What is his influence on the larger comic world? What are some of his best stories OR some of your favorites that he has written? What would you say are his strengths and weaknesses?

I am a fan of Grant Morrison. I still need to read his Animal Man run but he is a fantastic writer and I rank All-Star Superman to be one of my favorite Superman stories. His writing style depends on the book or characters he is writing. For example, his style on team books like JLA or X-Men will be different than his Superman books. Furthermore, he has a deep appreciation for the characters and the history of comic books while also understanding it is his job to push things forward. As for his weaknesses, there are times that he gets to full of himself. That works for somethings but not for all things.

If you have never read his autobiography Supergods I strongly suggest it. Throughout the book he alternates the history of comics and his own life.

Grant Morrison was one of the first comic book authors I got into as a teenager, back in the late 90s/early 00s, and I think he’s fantastic. I’m not a huge comic fan, so there’s still a lot of major works of his I haven’t read, and I don’t have the same breadth of knowledge of comics in general that other fans on here have, so I can’t speak with much authority about his influence. But I can say that he’s got a real penchant for mind-bending, often downright psychedelic stories, which are probably my favorite type of stories. The first series of his I read was The Invisibles (this would have been after I had started getting into comics because of The Sandman, and had read some of Alan Moore’s stuff like Watchmen and Saga of the Swamp thing), and it blew my mind. I think his run on Doom Patrol

But I never really had the money to buy a lot of comics, and didn’t have access to a library with a good collection, so it wasn’t until relatively recently that I realized that he’s also known for writing “normal” superhero comic books like JLA and Superman, though from what I’ve seen there’s usually at least a bit of weirdness even in those runs.

I’d also second pretty much everything @darkstarz said: you can really tell that Morrison has a deep knowledge and love of comic history and it makes his stories on long-running titles that much better, and he also does seem to think quite a bit of himself. This can lead to some of his stories just having way too much stuff going on, and you might finish something and not really be sure if you fully understood what happened. I’m still pretty sure I don’t totally understand everything in Final Crisis. But on the whole I still had a lot of fun reading it.

Also Supergods is great. Definitely check that out.

Better off asking me about a specific title

I love his early stuff (Doom Patrol, Animal Man) and his work with big names like Superman, Batman, and the JLA, but my personal favourites are Seven Soldiers and Multiversity because they use DCU characters and concepts in interesting and exciting ways.

Grant Morrison is a favorite of mine. The way he works in pure craziness, and yet makes a great story out of if is amazing to me. I love most of his work (with the exception of his run on Batman) because of how hopeful and optimistic they are. If you are ever down, read some Grant Morrison and you will always feel better. Further more, I find how he see’s the world to be very interesting and thought provoking if you get the chance to see what see’s trying to say.

Over the last 30 years, the vast quantity and quality of amazing comics he has written has left an indelible mark not just in my own personal comic collection and imagination, but also in the entire comic book industry. 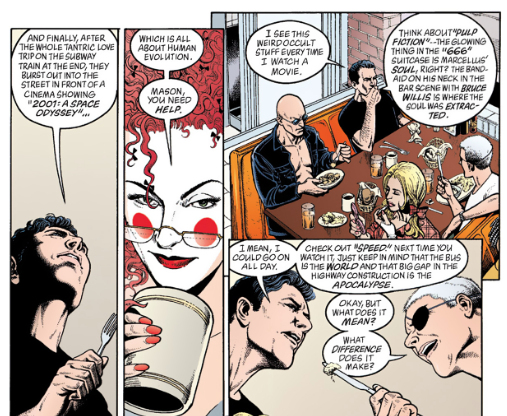 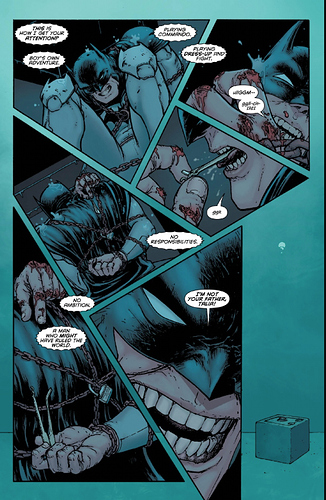 Yeah! Seven Soldiers I always go back to. And all of those fantastic artists backing this massive maxi series.

@RufusPentecost, where is that comic panel from at the dinner?

@Sean-Malloy, That is from The Invisibles, from some point in Volume 2, drawn by the estimable Phil Jimenez . 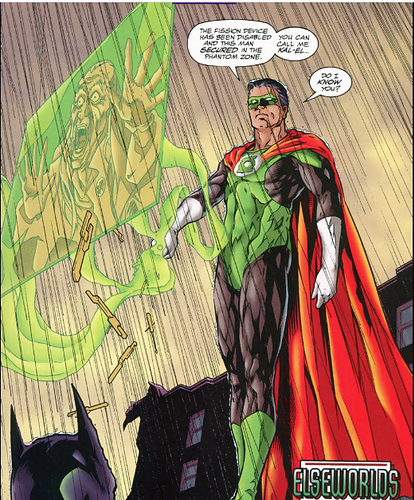 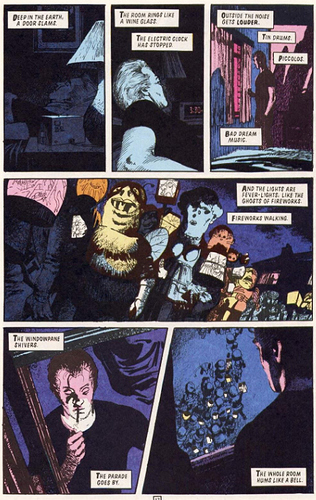 I think he’s the greatest of all time. I can even pinpoint the exact moment I came to that conclusion (and the years have only strengthened that belief). 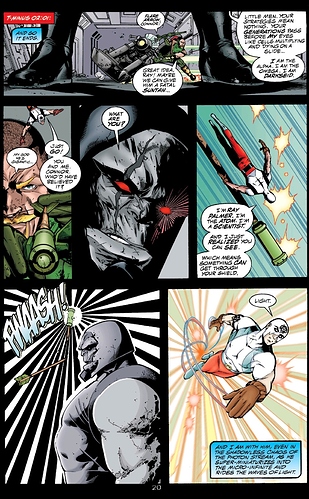 It would have been great on it’s own, but Grant gave away the ending before Rock of Ages even started. In an interview with Wizard Magazine, they ask him about threats the JLA will face in the future. And he mentions Darkseid and straight up says it all comes down to Green Arrow and the Atom alone against the New God and they win! My mind couldn’t fathom it, and for months I wondered how he was gonna write that scene and have it make any kind of sense. It blew me away when I read it.

Often times, I feel like I’m too “dumb” to really enjoy his work. I also felt like you needed some esoteric knowledge to understand certain things.

I am a fan of Grant Morrison. There are two things that I think are true of his work. The first is that he tends to be very meta. There are points in some of his work where characters realize that they are in a comic book. The second is that there is a lot of craziness in his work A perfect example is his run on Doom Patrol, in which they fought such opponents as Red Jack (a powerful being who tortures butterflies), the Scissormen (who cut beings out of reality), and The Beard Hunter (who has a vendetta against men with facial hair).

I don’t really know anything about how that comic has been collected, so I am not sure which GN volume that would be. 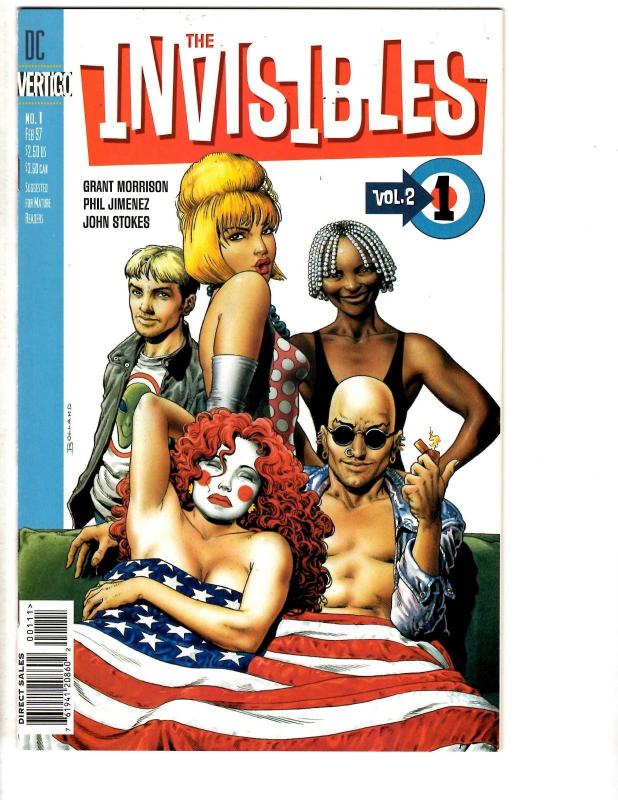 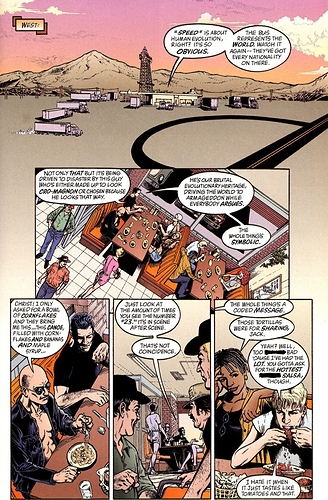 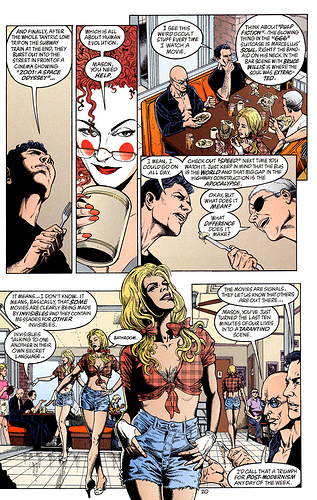 Grant Morrison is hands down my favorite comic book writer.
so much of his work is so influential, and richly steeped in the historical lore of his work, if it is not his own creation.
Batman Inc. and his entire Batman run is phenomenal!
Seven Soldiers of Victory is a magnificent tapestry, weaving together threads and characters in a unique, and meaningful way. All Star Superman (his Action Comics run, and Super Gods novel) prove that he knows Superman intimately, and sees how and why he is so incredibly important. Invisibles, and Doom Patrol are a little more weird and abstract, so they aren’t for everyone, but they are entirely my speed and style. i LOVE his work. Batman R.I.P. and Final Crisis get a lot of criticism, but i thought that they were wonderful. it’s all in what speaks to you though, and Morrison maintains eye contact while speaking directly to me.