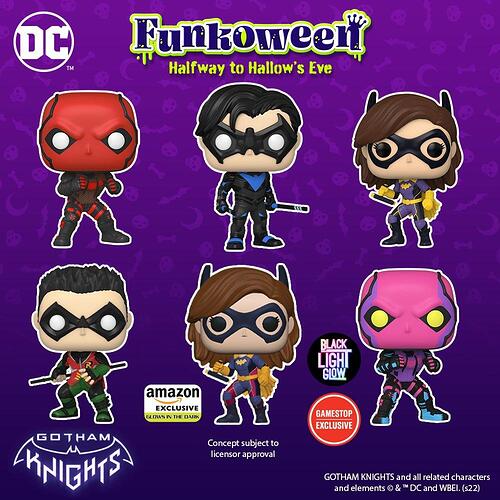 Funko pop is doing a funko figures of gotham knights i think you can buy in store or online shop tell me you find your favorite bat family character i hope to find one of the bat family.

Agreed… though I also see this as a potential female counterpart to Red Hood, but I think that’s just me. The Pink Hood! (Weird ring to it though…)

but I think that’s just me. The Pink Hood!

Are you creating your alternate identity right now? This makes so much sense as Jason’s wife… oh my… okay I’ll say less so less people know about the… secret…

I mean… I could… but… I’d need to make some major adjustments to the costume. Hmm, ideas ideas…

I’m guessing that’s Damian… no love for Tim yet again.

But I want Nightwing and Babsgirl.

I believe it is Tim. If I remember correctly I think WB confirmed that it was Tim as Robin, but for some reason his costume looks similar to Damian’s. If it means anything, I think they’re going to give alternate skins and there should be a Red Robin inspired one in the game for him.