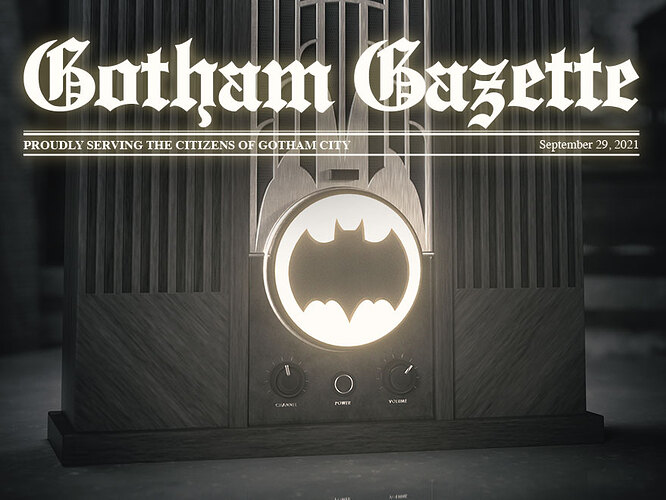 Gotham City is a busy place, with a lot going down each and every week. In this monthly column, Joshua Lapin-Bertone helps you stay on top of it all by letting you know what you should be paying attention to within the Bat-Family…and why.

Who is the most important supporting character in the Batman mythos? Some might say Alfred, Jim Gordon or Dick Grayson, but I would argue that it’s Gotham City. The city lives and breathes as a character, with its own distinct personality. It’s hard to put it into words, but there’s something about a story set in Gotham that just feels different than a story set in Star City. Consider this, how different would Batman comics be if the entire cast moved to a different city for a year?

Batman: The Audio Adventures explores Gotham in a way that the comics, television shows and movies haven’t been able to. Reminiscent of an old school radio play, you can listen to all ten episodes of this new narrative podcast right now on HBO Max (you can also sample the first few episodes on Spotify, Apple Podcasts and the DC FanDome webpage.) Like most podcasts, Batman: The Audio Adventures is a great accompaniment to your morning drive, an evening jog, or simply while you’re unwinding at home. I’d recommend dimming your lights and listening at night for the full effect.

Yet, while the series may be called Batman: The Audio Adventures , I’d argue that Gotham City is the real star. Each installment of the series is comprised of multiple vignettes featuring different Gothamites. Batman is absent from a portion of the segments, which instead focus on the lives of his villains and the people he protects. This allows the listener to really step into the shoes of the average Gothamite and learn what it’s like to live in the city.

To learn more about Batman: The Audio Adventures, head over to DC Comics!

Have you listened to Batman: The Audio Adventures yet? Let us know in the comments!

This series absolutely owns. The greatest crime of all is that a second season is yet to be announced.

I’m in love with Batman: The Audio Adventures. It’s 100% perfection. Thank you for bringing back old timey radio shows!

I just found this gem recently and I’m loving it

It is a glorious win for the imagination.