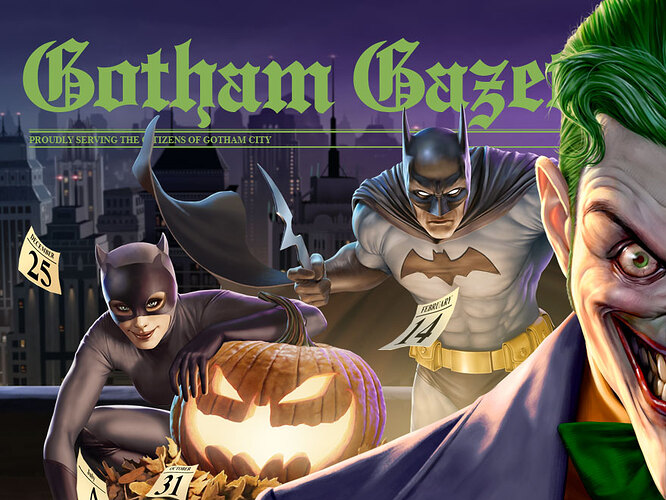 Gotham City is a busy place, with a lot going down each and every week. In this monthly column, Joshua Lapin-Bertone and Tim Beedle help you stay on top of it all by letting you know what you should be paying attention to within the Bat-Family…and why.

You have to wonder sometimes if Batman has any regrets.

Since putting on the cowl, Bruce Wayne has done so much for the city of Gotham and the greater world that no one in their right mind would call him anything other than a hero. But he is still human, and humans make mistakes. Bruce for certain makes plenty of them in Batman: The Long Halloween, Part One, the brilliant new animated movie based on the popular Jeph Loeb and Tim Sale graphic novel. He accuses the wrong people, he mishandles a suspect, he barely manages to keep the Joker from killing much of Gotham. Set early in Bruce’s life as the Bat, this is clearly not the cool, efficient Dark Knight we’re accustomed to seeing.

Yet, even knowing this, it’s still pretty shocking to see what he does with Harvey Dent.

Batman: The Long Halloween, Part One is very much an origin story. Not of Batman and not really of Two-Face, but of modern-day Gotham. Taken together with its upcoming second part, it’s basically the moment that Batman truly becomes the hero that all of us know, fighting larger-than-life villains within an underworld where rules do not exist. Beginning on Halloween night and told over the course of a year, The Long Halloween finds Batman teaming up with a young Commissioner Gordon and a crusading District Attorney Harvey Dent to bring down Carmine Falcone, the most powerful crime boss in Gotham. Meanwhile, a mysterious, efficient serial killer who only strikes on holidays seems to be targeting members of Falcone’s family and gang.

To find out what Batman does with Harvey Dent in The Long Halloween, head over to DC Comics!

Are you excited for the return of the Gotham Gazette? Let us know in the comments!

Personally, I liked what they did in batman Earth 1 for two-face as it was so different. I enjoyed seeing the relationship of Harvey with his wife Gilda the film has been portraying, I like we are learning a bit more about what had been a minor character. Now if we could only learn more about Martha Wayne nee Kane. Harvey’s evolution is also a bit more interesting with what little we have seen.

However, I am hoping we get to learn more about Batman and Catwoman’s relationship in part two, (and they stay together through the entire film continuity).