As a fan of TRPGs I thought I would post this here for anyone who hadn’t heard. Monolith is making a new Batman RPG following the success of their Gotham City Chronicles board game. There are several books planned, with 2 extra setting books alongside the main Gotham City book. It’s been around 10 years since the DC Adventures (M&M 3rd) RPG launched so it was about time we got something new. I have high hopes, and equally high concerns, but I plan on backing it once the Kickstarter gets up and running. Monolith haven’t given out much info since last year other than its WIP. They have posted new art on their Facebook page but that’s about it. 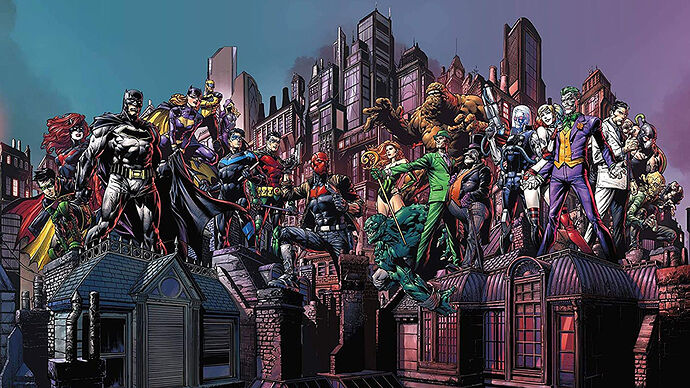 Thanks for the heads up

This is cool and all, but what I really want is a new DC Universe TTRPG. The world is bigger than Batman!

This is cool and all, but what I really want is a new DC Universe TTRPG.

Totally agree, although my personal experience with DC RPGs started with The Batman Role-Playing Game, a stripped down version of the DC Heroes RPG that hooked me on the system (and roleplaying games in general, as it was my first one) enough to move on to DC Heroes box set. So if this leads to a more expansive DC Universe game using the same rules, it could be a good entry point for casual fans who just think Batman is cool.

Personally, I wish DC would just reissue DC Heroes (they featured it on one of DC Universe shows before the switch to DC Universe Infinite) with updated character stats and artwork. Or release sourcebooks for the Arrowverse shows using those rules (I ran an Arrowverse campaign a few years ago that was a big hit with my group). We don’t need a new game, we just need fresh material and a fourth edition of DC Heroes.

I expect that we will get a new DC Universe RPG, new or updated, if the new Batman RPG does well. We also have two settings books that we don’t the contents of so we might be getting elseworlds or JL content.

Big news tied to the talks of the Gotham City Chronicles - The Role-Playing Game, we now have a Marvel RPG in the works. Won’t be out till 2023 but big news! It also might force DC to step up their game.

I bought a large chunk of this first set, and enjoyed playing it the few times I did, but I think the rules are a bit confusing. The minis are gorgeous, as is the box and inside art.

The board game? The Roleplaying game is made my the same group but is built for roleplaying rather than simple gameplay. I expect the quality will convert to the new game.
What the team have revealed on the art side is very impressive.

Oh, I didn’t realize it was a new project by the same team with the same cover art.

Unfortunately the game mechanics is owned by another company right now.

Update: We should have the Kickstarter available within the next couple of months, also the game is well underway to completion. WIP images seem to suggest the lore sections are being worked on or are wrapping up. The Monolith Facebook has the newest updates. I expect/hope we’ll get more info on the 16th.

My wife is not gonna be happy about yet another RPG Kickstarter after the number I backed in 2021, but it’s DC Comics so I have to do it!