Do you think theyll bring venom in finally? like Hugo Strange found out to keep viper from burning people up and created venom to help create Bane? 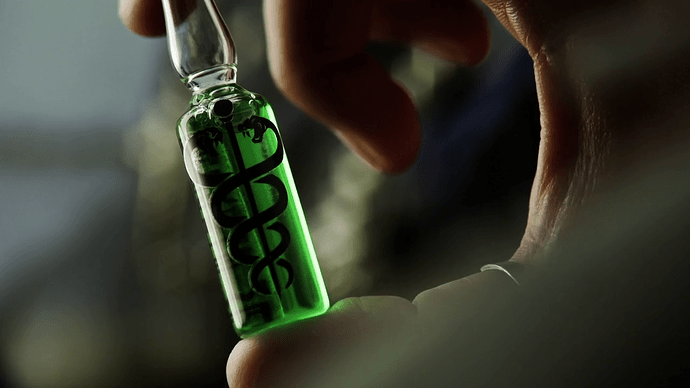 Or any thoughts on Bane?

I think Bane looks like a shitty Borg cosplayer.

Nah, the look for Gotham’s Bane is far better than The Dark Knight Rises’ version of Bane. Plus Shane West’s voice isn’t annoying like Tom Hardy’s voice is (that poorly done accent… ughhhh).

But yeah,
They did indeed bring the Venom in. However, I don’t think it has that classic Pump for more power mechanic. I’m pretty sure that it’s just “once you have a dose, it’s permanent”.

Then again, Strange gave Gordon the venom has well so I’m not sure when the effects will wear off on him or how he will reverse it.

I thought Venom would be a more stable form of Viper from the previous season but whatever Strange gave Gordon could be it too. They made a cure for Alice’s blood so maybe Lee will save him again

Guess we’ll find out next week

I wasn’t big on the look at first but I came around and like it. Not that big of a fan of the mask but it’s different. Want a better understanding of everything think that’ll help.

I was hoping for the Luchador classic comic to return but I mean, this is working well for what the show needs. Shane West says he’s wearing 6 or 7 inch heels to add some height when playing Bane lol I can’t imagine how hard it is to walk with all that gear weighing him down.

I’m not liking the look at all. I would have liked something between the comic look and the Dark Knight Rises look. And the Frankenstein boots he’s wearing are ridiculous! This is almost in line with the look of the Batman & Robin version, but B & R wins because besides the Frankenboots and studded diaper, it’s fairly comic accurate.

I don’t think he was necessary for this last season. He just looked kinda rediculous. They have spent literally no time building up Bruce Wayne into who he is going to be. Why waste episodes on everybody else. We literally got only two episodes left and all we got from Bruce is: “It’s time for me to save Gotham”…??? What… I feel like this is going to be another Smallville final episode scenario. No flights, no tights. Or we’ll see a CGI rendered version of lil Brucey with those stupid gloves of his… (Sorry, every time I see him wear them, I just wanna slap him) ```
can he please just go to Nada Parbat already and do us all the favor??

I mean, the Bane from Dark Knight Rises is actually far less accurate than Gotham’s Bane. And Batman & Robin’s Bane was only slightly varied from the comics’ Luchador Bane. It’s the closest thing we have to the actual comic Bane and yet people like Tom Hardy’s horrible Bane more, ironically these are the same people that get touchy about the Bat-nipples in Batman & Robin.

As far as Gotham not building Bruce up, not sure what you mean. Bruce already got training from Ra’s Al Ghul and the League, Alfred and even the Court of Owls if remember correctly. He has had plenty of fights throughout the series but if you were looking for more fight/action sequences and less drama/story then I can see how you’d be disapointed. I thought they built his story up quite nicely.

The last episode will shoot to the future where Bruce and Selina are grown up. Sad that this is the last season but I think CW or DC will give us a new Batman live action show soon enough.

I want to know what made people think that live action Bane has to be somebody else’s tool. Batman and Robin he was Poison Ivy’s bodyguard. In The Dark Knight Rises he was Talia’s muscle and now in Gotham he is Nyssa’s muscle.

Animated Bane isn’t like that at all. He has his reasons to appear in Gotham like in the Animated Series or use people to serve his purpose like in Young Justice. In Doom he set out to break the man.

Video game Bane was pretty good in my opinion. He was there to kill the Bat, then revenge and then helped to make sure the Titan formula was destroyed. His portrayal in the games were good.

I know he’s huge and everything but why not showcase his intellect too that’s just as much a part of him than anything. If they used that in B+R I think people would have reacted better.

He’s trained and read books throughout his life. He is the man who broke The Bat but that was because he formulated a plan to do so. He knew he couldn’t beat Batman one on one at full health. So he released everybody and he knew Batman would run himself into exhaustion then waited to strike. He also faught alongside with Batman too and beat his Venom addiction for a little bit.

I liked the background story on Bane in Gotham cause it was different. Just would like to see some Bane that is more than a pawn in somebody else’s plan.

We know it’s the end of the series and with the introduction of Babe it took up a couple episodes that we could have seen the other Villians that are lurking out there. What about Scarecrow? Freeze? Firefly is out there too. Did they all get on a boat and go to a secluded island where Harvey Dent and Det. Montoya are?

My thing is…Bruce’s training with Ra’s was for like 30 mins >_>…not nearly enough nor was it really justified to see him take on full grown men. Great season so far though, I’m just hoping the last episode doesn’t disappoint.