I like when the skill and martial arts moves of the performers are clearly seen and not obscured by choppy editing or too much shaky camera. I like when the impacts of the hits feel powerful.

Personally I can’t stand excessive shaky-cam + rapid choppy editing. That’s the worst style of action. I think they do it either to gloss over sloppy choreography, so that you can barely see what’s going on anyway, or as a lazy way of preventing you from spotting the use of stunt doubles.

Here are my thoughts on some superhero fights.


This is the best Batman fight in any Batman movie. Batman fights fast and efficiently, like he’s leapt straight out of an Arkham video game. The impact of every hit feels powerful. And the bad guys aren’t just standing around waiting to get hit, they actually feel dangerous the way they’re really trying to take Batman down. It’s fast paced, but perfectly shot and edited, so that Batman’s moves are all clearly seen.


This is an improvement over Batman Begins, because Nolan abandons his old shaky choppy style in favor of a steady camera and long shots. But the sloppy choreography is too obvious. Some punches and kicks look like they don’t connect. Stunt guys are just standing around until it’s their turn to get hit, some even fall down without getting hit. Hits don’t look powerful.


This was awesome. There’s emphasis on Wonder Woman’s power and fighting skills and we really see and feel both. The lasso looks incredible in combat.


Another example of too much shaky-cam & choppy editing. You can tell the stunt performers are talented, but their moves are obscured by the distractingly bad camera work and editing.


Fights between superpowered combatants don’t look any more intense than this. This is the best depiction of super strength we’ve ever seen. There’s not much that looks more powerful than impacts strong enough to produce window shattering shockwaves.


This suffers from floaty-looking physics. They look so lightweight. The hits look soft, like we can barely feel their impacts.


Awesome emphasis on their power and fighting skills. The long held circling camera shot makes this extra impressive on a technical level.


This is why Zack Snyder is one of the best action directors ever. Holy ****, this looks good. Their moves are both beautiful and fluid and powerful and brutal at the same time. It’s impossible not to be impressed by how not a single one of the Comedian’s attacks lands on his opponent, really emphasizing how dangerous he is. Even the lighting is amazing, with the “intruder’s” face perfectly obscured by shadows the whole time. 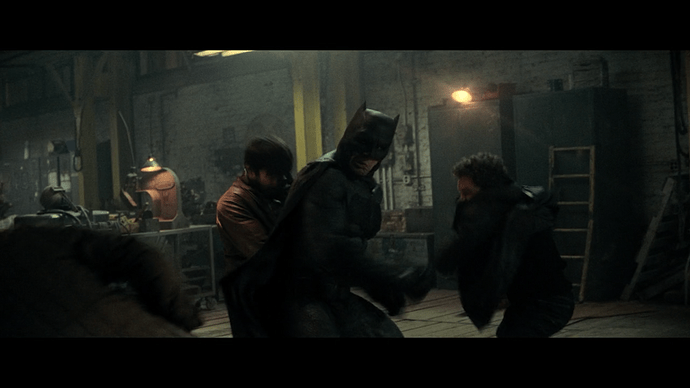 I thought Winter Soldier, and Revenge of the Sith had awesome fight scenes, and those are two of my favorite movies. (you know, minus the crime-worthy Anakin dialogue.)

One of the best choreographed fight scenes was in season one of Daredevil. It was a hallway fight scene no edits or cuts. Just one fluid action as the camera follows Daredevil fighting 20 members of The Hand eventually the camera pans out you see the hallway with Daredevil standing there and all the bodies laying in a heap

Still haven’t seen a CBM fight scene that can compare to any of the ones from MoS.

@AnimalPerson that’s what happens when you have a guy who doesn’t really have any martial arts background.

I think the Russo movies Winter Soldier, Civil War, Infinity War and Endgame have some of the best fight scenes ever and they feel straight from comicbooks.

Thanos vs Iron Man and Doctor Strange and Co. on Titan is the epitome of a comicbook fight brought to life.

Captain America and Winter Soldier vs Iron Man is also one of the greatest fights ever.

On the DC side I think Wonder Woman has had the best fight scenes. Particularly when enters the fight at the Village of Veld. Between the signature music theme and the badassery of Diana’s fighting prowess.

Batman vs Bane first fight in The Dark Knight Rises. Its intense, its emotional and just an overall really great scene. Nolan is one of the best filmmakers in the world.

MoS was my fav fight ever.

Batman v Superman in the warehouse is the best CBM fight scene for me. The fight scenes in Watchmen are a close second. I’m also bias since those are my favorite CBMs and I love all things Zack Snyder.

-Batman vs. the shark from Batman: The Movie
-Superman and Zod from Superman II
-Superman and Nuclear Man from Superman IV
-Batman and the Joker thug in the church while Vicki and Joker dance in Batman
-Batman’s post-elevator takedown of Two-Face’s thugs in Batman Forever
-Superman and Zod’s final battle in Man of Steel
-Batman’s fight with thugs in BvS
-The Trinity vs. Doomsday in BvS
-Wonder Woman vs. Ares in Wonder Woman
-the Justice League vs. Steppenwolf (Superman’s moments in particular)
-Arthur and Mera vs. Black Manta and his goons in Aquaman
-the Shazam! Family vs. Sivana and the Seven Deadly Sins in Shazam!

I liked the Batman fight scene where he took out the thugs to save Superman Mother in Batman vs Superman movie.

Pretty much any fight scene done by Jay Olivia. I rank his stuff ahead of any live-action fight scene. He is very precise. His fight scenes really express character.

Love the Man of Steel, BvS and Wonder Woman picks. Definitely great fight scenes. Agree that shaky cams and darkness/shadows make fight scenes less enjoyable. I like to see everything. I’ll add that choreography and score has a lot to do with it as well. A good example would be almost every fight scene in Arrow. Always thought those were very well done, especially for a tv show.

Regular fighting or martial arts no matter how skillful does not really do anything for me.

I love the BvS Doomsday fight with its spectacular power level. I love the Supergirl vs Reign fight especially the high speed flying fight at the office party, and tearing up the street. I love the silly banter when Brainy fights with statistical predictions.

Use the environment, find fun backdrops, turn the power level up to eleven, throw on a great fighting soudtrack and do some banter. That’s when fighting is at it’s best for me.