Gimme a Series to read

I’m bored and haven’t read nearly enough on here. Someone throw me a bone a quick summation of series.

Superman: For Tomorrow (available as one of the storylines on this app). A million people mysteriously vanish from Earth, including Lois. Clark deals with the mystery while confiding to a priest about his struggles. One of my favorites. Amazing art by Jim Lee. Give it a try!

Other (much longer) suggestions would be the complete runs of New 52 Batman and Wonder Woman, starting from the beginning (2011 I believe). Good stuff.

Another one I recommend is the Superman Bendis run, starting with The Man of Steel (2018) and then continuing in the Superman (2018-) series by Bendis and Reis and Action Comics (2018-) by Bendis and various artists, including Sook, Gleason and Paquette. Some folks here really dislike it, but I think it’s fantastic.

The adventures of Jon.Kent son of Superman

Manhunter (2004) I really enjoyed it. Kate is an every woman caught up in the world of superheroes. 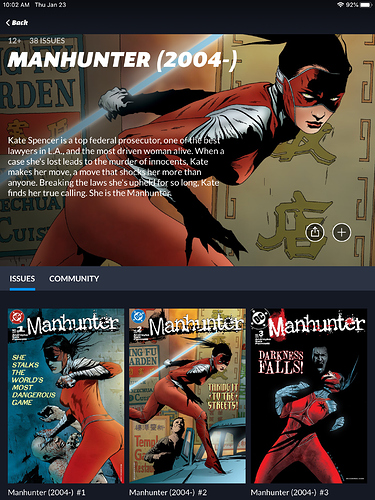 If you want a short run I would recommend Arkham Asylum: Living Hell. It’s about a super rich dude trying to take advantage of the system by pleading not guilty by reason of insanity and then getting screwed over by being sent to Arkham Asylum. He just tries to survive and, as you can imagine, it doesn’t go that well. There is a weird subplot with demons, just a warning. Batman shows up once or twice.

For a long series I’d recommend Convergence. I personally like seeing all the old stuff being brought back like the Pre-Zero Hour and Kingdom Come universes. If you’re not familiar with the history of a specific character/universe they have a quick explanation at the end of the issue to catch you up to speed.

Batman: No Man’s Land (I have a reputation to keep up)

“After the earth shattered and the buildings crumbled, the nation abandoned Gotham. Then only the valiant, the venal, and the insane remained in the place they called… No Man’s Land!” - Ancient Geek Proverb

NML was an event spread across multiple series and issues that started after a plague and earthquake shook Gotham City’s apart. The government declares the city no longer part of the country (hence NML) and cuts off all aid and travel between it and the outside world. Gangs run by super villains take over the streets and Batman must become a mythic like figure to maintain order of a broken city.

The series introduces several characters to canon (Cassandra Cain-Wayne and Harley Quinn [Boom. Pulled the “my-favorite-series-introduced-Harley-Quinn-to-canon” card!] for instance), and has had impacts on such more modern stories as Batman: Zero Year.

One of the best parts? You can pick up just about any issue from the series and read it. It can be found in Detective Comics, Batman, Azrael, Shadow of the Bat, and many more!

If you were to give me ONE Superman series to read, which would it be?

Out of the two that I mentioned, I’d stick with my initial recommendation of Superman: For Tomorrow (a complete story that is available in its entirety on DCU).

It may not be on top of everyone’s lists, but it is at the very top of mine.