It’s exactly 1 week until DC Comics flips on its head. We’ve said goodbye to so many runs (both great and not so great) and now that Rebirth is basically over (minus Death Metal #7) it seems like a good time to talk about the various plot threads that have been established that will be going. BUT FIRST? What books came out this week?

Now, I haven’t read all of them, but I do want to highlight two books that came out this week: Justice League Endless Winter #2 and Batman Annual #5

First, Justice League: Endless Winter #2 finished a 9 part crossover that gave a lot more teases for Infinite Fronteir than I intially expected. I’ll go over the threads from the earlier issues later in the page, but I want to highlight the two big one’s from this issue.

First is these two panels 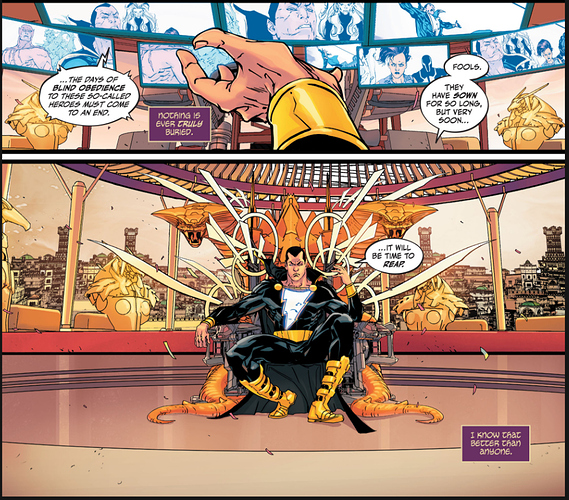 image961×843 885 KB
which comes from a speech Black Adam is giving to the world about the justice league. He believes that they aren’t willing to do what is necessary to protect people, and in some ways publically announces his opposition to the Justice League. This occurs only two months before Black Adam is set to be a part of the Justice League. What is Black Adam planning? Will he initially start in opposition to the Justice League? Will this new Justice League have a different philosophy? Similarly, this book sets up and reminds people of the long-lasting distrust Hippolyta and Black Adam to have for each other. Given that they will both be in Justice League #59, this story teases up a tension between the two god-like beings. I’d expect Black Adam’s Utilitarianism and Hyppolita’s Moral values to come at odds with each other repeatedly.

Now what about parts 1-8? Well here’s a quick summary of some of the most important parts.

While I’m sure there might be one or two more added threads, I think it’s safe to say that Endless Winter feels important to the future of the DCU. Is it a must read? No, but it’s a fun adventure that does a great job grounding it in the shared world.

Batman Annual #5 is actually fairly reserved in the number of things it establishes. Mostly it’s a tale showcasing Clownhunters brutal origin and marking the parallels between Batman and Bao (Clownhunter’s read name). After the Joker kills Bao’s parents, Bao is left without parents in a way alluding to Bruce Wayne losing his parents. However rather than declare a war on crime, Bao meets Batman who tells him to have faith that things

However, Batman doesn’t ever put Joker away for good. Instead, Joker keeps killing more and more people all because the Joker is “saveable.” Bao loses his faith in Batman. The comic ends with Bao questioning what he wants and what justice is. It remains to be seen where Clownhunter goes in 2021, but it was a great story.

Now this week, we are also discussing some of the major plot threads heading into 2021.

There are more plot threads going on, but those are the ones I remember.