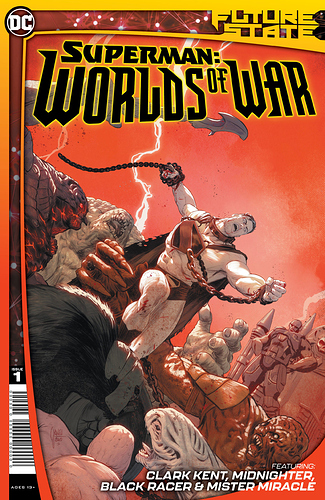 Well, that was underwhelming. This single title I looked forward to more than any and it’s the one I’m most disappointed in. I pick up Robin with no exceptions and loved it. Guess that’s just the way it goes.
So, very nice opening story about how different people see Superman and react to him being missing while his kid is bottling Metropolis like it’s Soader. The entire vignette capped by the evening remembrance is very nice, but it’s just that a little vignette not a proper story. Nice for the backup pages certainly. And Superman swinging a chain and ax, enjoy your splash page cuz that’s all you get. What…?
Backup stories are a mixed bag that cannot make up for my disappointment in the main feature. Our second Mister Miracle story in Future State leaves me only slightly more interested than the first, which is not much of an accomplishment. Midnighter suffers from my primary Midnighter complaint in that as cool as he and the Authority are, I don’t think they belong in the main DCU. They’re too violent and putting them in the same universe as Superman, Wonder Woman and Batman is too limiting for the Authority (did like him in Grayson though).
Black Racer seemed okay, will wait on that one.

Fantastic start to his run. And Mongul was barely in a few panels, but you could feel how menacing he is. Can’t wait for the next issue.

Gonna have to disagree with you for once there @msgtv. Well partially disagree, because I’ve only read the first two stories, the main one by Johnson and the Mr. Miracle one.

I loved the main story. Seeing how different people view Superman in his absence was, to me, almost like a reflection of how us fans view him. Some are awed by his powers… some are moved by his heroic feats and accomplishments… some are into the fantasticalness of it all… some focus on his humanity, which sometimes outweighs our own, even though he’s “the alien”. When that Smallville visitor mentioned that it was “Clark Kent” that saved her, I was deeply moved. Does she mean that “Hey there is a man behind the costume, and his name is Clark Kent”? Or does she mean that it wasn’t a “super” act but a “human” gesture from Clark that saved her? Maybe we’ll find out next issue. I feel like that, and along with the scenes in Smallville are a great way to convey what a world in which Superman’s identity is known can be like… a very good way to continue to build on what Bendis started. Johnson also continues Bendis’ knack to give Superman a voice.

We got very little Superman in this story, but the few moments we spent with him, he felt like Superman. “What’s your name?” he asks his fellow prisoner on his way to the fight arena on War World. That’s Clark, always concerned about those around him, even at the most difficult moments. How did we get here though? Hopefully next issue sheds some light on that.

The Mr. Miracle story was cool. Nice little sci-fi elements to it. Kinda odd that it happens after the events of Superman of Metropolis #2, which is not out yet. I feel like there’s an obvious disconnect I’m not getting.

Will report on the other two when I read ‘em

I likes it in general because its not just about superman but what he represents.

I’m really excited to see Midnighter again, I love him as a character and I’ve missed him, but I am a bit nervous about making Apollo an Antagonist for him. Maybe I’ll be pleasantly surprised and it will be well done, or maybe theres a Trojan horse situation (because of trojan solutions) but putting an established gay couple against each other is going to make me nervous. I hope I’m wrong! I hope its really good! But I have some doubts.

I dont know anything at all about black racer, but i love her personality, even without understanding the mythos shes cool enough to keep me interested.

I just wish the Superman story had more Superman. I would have been happy with the intro part as a backup story. Hoping the next part gives me the World of Wars I was looking for.

I get it. It’s not really a “main story with backups”, but more like “4 stories”. Kind of like a music album, where there’s a title song, and it’s just one of many. That wasn’t a great simile, but I tried

I have my copy waiting for me at my LCS. The discussion here has me very intrigued.

This was my first time reading anything from Phillip Kennedy Johnson, so I was very curious how he’d write my favorite hero seeing as how he’s taking over both main titles soon. 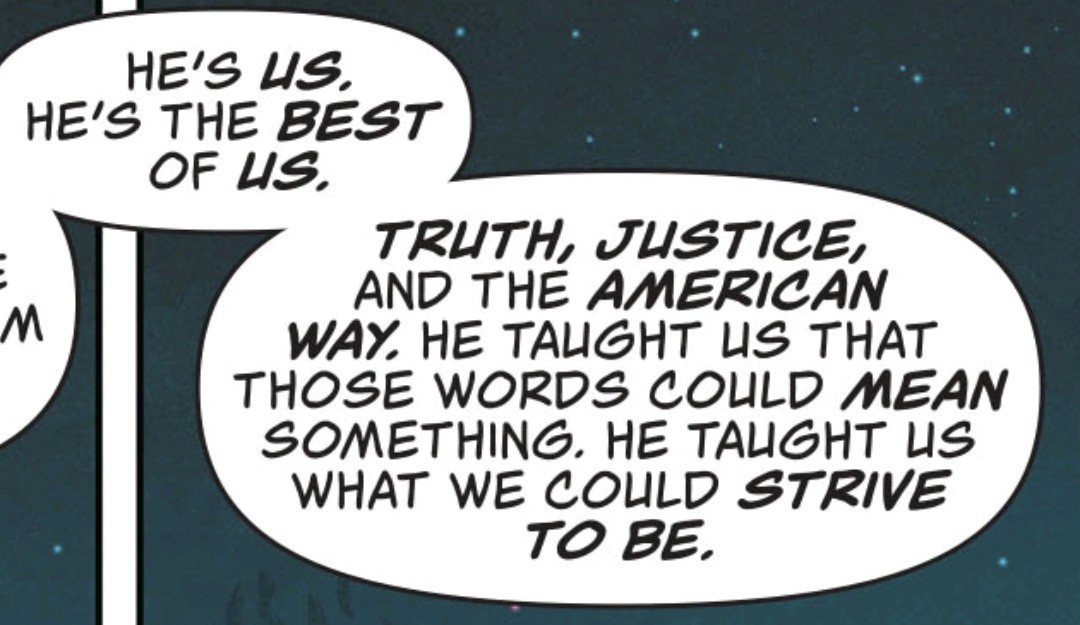 Loving this story so far

I really liked that portion, just wanted more of Superman himself. Could have done without the Mr Miracle backup for more Supes.

Now that I went into issue 2 with an idea of what to expect from the main story, I totally loved the main story. Clark’s view of one man’s heroism reflected in Superman’s drive to free the people of Warworld. Very nice. Glad the story will continue in House of El.
Backups. Midnighter and Black Racer were fine though not particularly compelling. Mister Miracle lost me a while ago and nothing here brings me back.
#FreeScottFree