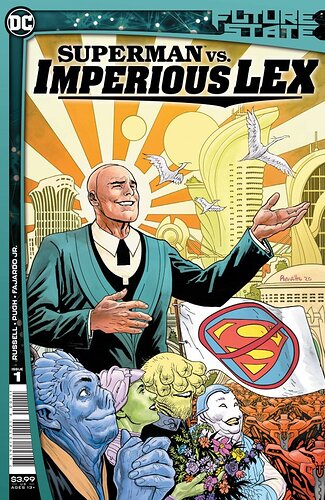 Up until this point, I’ve never read a less than stellar comic from Mark Russell. And, I still haven’t. This is a great comic. Russell has the gift of reimagning a character or placing them in a comedic situation without ever loosing sight of what makes that character unique, what motivates them and how they would react in this new world. Here, he takes the great Silver Age stories of the world where Lex is a hero and Superman the criminal and turns it into an exploration of one society blindly enriching themselves at the expense of others. How much blame should Lex’s people bare, how ethical is it to turn their society upside-down. And, should Superman and Lois help this society that preyed on others? Russell never takes the easy way out when he asks questions, even when he tips his hand on where he stands. With Russell, you can just enjoy the comic, think about the societal issues he raises or do both. Without going to far down that rabbit whole, but Russell could have just as easily written this book in the last few weeks it feels so topical in some ways.
Having said all this, can’t forget the book is flat out funny as heck. The Thanagarian on the council angry at everything is hilarious and spot on. I laughed out loud when the alien tv talking head talked about robots ransacking other planets not being a stable basis for an economy.

I love this issue! It’s my favorite Future State title yet, by far. The art was pretty, it was an interesting story, and the depictions of Clark and Lex were great. It’s also my favorite kind of Superman store, where his compassion and morality are more important than his strength or powers.

That’s another mark of Russell’s writing, he lets his characters have heart and that fits Superman so well

I’ve been reading almost nothing but Superman for a while. I feel like people who don’t like him just probably haven’t been reading the right writers.

Was a good light read. I read a few issues of Russell’s Flintstones comic and I can see the similarities: subtle humor with not so subtle social/political commentary. Was fun and imaginative, but the sardonic tone sometimes overshadowed the heart & excitement the issue had to offer (of which it offered plenty, with Superman showing compassion towards those that oppose him, and battling alien robots). Great art; I love Supes’ regal new costume, with that ginormous S… a big Superman S is a good S. What’s that line in Luthor’s head? Is he perhaps a robot himself? Clark would have figured that out, though. Will Clark’s bid to help the people of Lexor work? Overall they’ve done enough to keep me interested in the next issue

I was trying to figure out what Lex was too. I settled on human with robot parts. If only there was a word for that

Very nice finish to this two part story. While Russell leaned more into the comedic element in issue 1, he really brought the drama and conflict in #2. Of course he didn’t forget drop plenty of humor along the way.
At the end, says to be continued, I did not know this.

Yea it’s three issues. It’s the only Future State book with an issue in March.

And I echo the praise. This is outstanding.