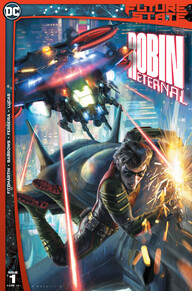 Future State is here. Need a place to discussion individual titles, this is the spot for Robin Eternal

Okay, I probably wouldn’t have picked this one up if I hadn’t started creating these Future State posts (and by the way if anyone else wants to grab and start an individual title when they come out, please do so. Only suggest you put on image of the cover with the OP, it makes it easier to find). But, I’d enjoyed most of the rest so what the heck? Man, this is a good story. First, we get an adult Tim Drake as Robin. I grew up with Dick Grayson, but Tim Drake may be my favorite Robin for earning the yellow and green on his own. Also set in Magistrate’s Gotham City, I like that not only is Tim still fighting, but the story just gives us one corner of the action instead of trying to cover a larger story. I also did a tiny inside-my-head cheer when we get a grown Spoiler saving Tim. The setup with the Lazerus ooze is nice and I should have seen the ending coming. I’m not familiar with Darcy, but seems cool. Couple of small things about her in the book that I liked. First, was the editor’s note. Weird to praise on editor’s note, but telling us that the ASL discussion between Tim and Darcy was not being shown in ASL grammar was nice. Just a small piece of info that ASL structures itself differently than English. The other was when the comms damper cut off her hearing device. Good way to work her deafness into the story organically, and increase the peril our heroes faced. Overall, very nicely done.

I enjoyed this one. I’ll pick up any and every Tim Special but this one was actually good. Steph showing up was really nice too. I read ‘We are Robin’ but I don’t remember Darcy. I do like the ASL conversations.

But a ground-level Tim story is just the perfect setting for him. I’m excited for the next issue.

And poor Steph, sporting the eyepatch

Yeah, she looks like she had a couple bad days.

This was absolutely phenomenal : the ASL, the costumes, Tim being Tim the genius dumbass, all around great. Im also digging stephs new look 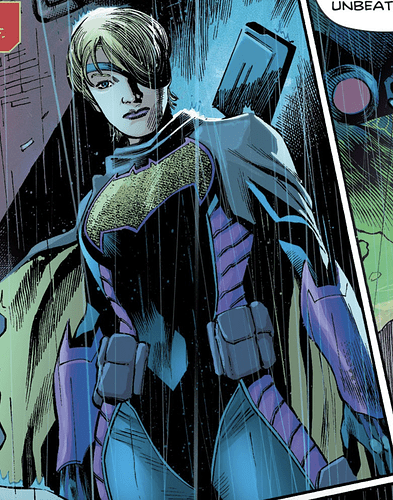 I just don’t like the whole '“Jason betrayed the family again”, but it didn’t have anything to do with the issue and more about his story in another book, but i cant say thats something im excited about. You know its great when I start nitpicking single lines line that haha

This is one of my 2 favourite stories so far in Future State, right there with Book of Guy.

Tim being Tim the genius dumbass,

Perfect way to put it

Very happy with part II. Tim kicks butt, Steph kicks butt, Darcy kicks…well you get it. No time to slow down with this issue. Always glad to see Tim get his due.