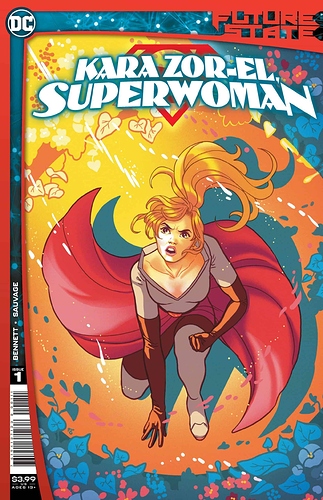 This is an odd book for me to think about. If I place this in an Elseworld or alternate Earth I love it. If this is in the main DCU continuity, I don’t.
Kara as Super Mistress of the moon grieving over the loss of Krypto is beautiful and haunting. The artwork with its painted feel and emphasis on soft colors and flowers lends an air of magic to the book. The arrival of Lynari, gives Kara someone like her (or at lest like the New 52 depiction of her) to mentor and shepard through her problems. I didn’t mind that not a lot happens in the book, I was happy just reading about these two as Kara attempted to help Lynari avoid some of the same emotional mistakes she made. There’s just enough impending danger to keep me around for issue two.
But, Kara saying she resented both Kal El and Jon and this essentially caused her anger issues I just don’t like. Yes, in the New 52 Kara landed her one PO’ed teenager and I was kinda okay with that for a while. But, even that version worked through those issues. And Kara has never been anything but loving, supportive and a good buddy to Jon regardless of his age. That her resentment of his assuming the mantel of Superman would eventually drive her to live on the moon, I don’t like and I don’t buy.
So, alternate Earth story it’s an A, main DCU just strikes me as false.

I kind of feel like they tried to pack in or vaguely hint at too much history for such a short story. Like I don’t get the history of where this moon colony came from or why she’s here. It’s one of those rare modern comic stories that could stand to have a little more decompression.

On Kara’s “resentment,” I can definitely see where a part of her might feel that, a dark thought that’s hidden under her love for her family. I think it gave the character a certain bit of realism.

My guess though is that this is one of the more further off stories that depends on some bad stuff happening. With that said, the chances of this kind of story being “canon” in their plans I think is very slim.

I could see that – especially with the dress costume Kara has. Plus this creative team are best known for their Elseworld/alternate universe stories together, so that might help give that vibe.

The art was flat out gorgeous. There’s a certain mellowness to the story… it could have used some more action & excitement, especially given the sci fi setting (which I like, a lot). Would have also liked to see more of this moon community and how it works.

I’m no expert on the character, but she’s always struck me as one with some pent up internal feelings to work through. Maybe it’s the comics I’ve read so far (not a ton, to be honest). Her line about “resenting” Clark & Jon didn’t strike me as one of true resentment, but rather one of envy. Speaking of pent up feelings… I liked seeing her let go at the end to defend her new “friend”. Will be interesting to see where it goes.

Why do the inhabitants of the moon look dismayed in many of the group shots? Is it to portray how her heroics are unappreciated by the masses? Didn’t quite “get” that part.

Overall, they’ve done enough to keep me following. Solid effort, in my opinion.

First of all, the art was gorgeous, and Krypto Nooooooooooo!, he should be able to live off of solar energy indefinitely. But I have to agree Kara with resentment is not the SG, I know and

. I’m going to chalk it up as an elsewhere tale.

aww poor kyripto it’s hard to lose a dog =(. Personally, I am glad to see Kara graduate from Supergirl to Superwoman. I also like Kara being a mentor… on the other hand, I think I am going to have to reread the entire future state in chronological order instead of publication order once they are all out.

I kinda like falling into these stories without knowing in advance where they fit in the larger picture. Feels like I’m letting the puzzle fill itself out. I wasn’t sure about the costume from the cover, but seeing it in full it’s a cool call back to her 70s look and at the same time seems more mature

So, we get issue #2. What I liked about #1, I like about the second. What I disagreed with the first, I disagree with it’s follow-up. The book looks gorgeous. I love that Superwoman Kara is a beacon of hope that refuses to fall to her darker impulses. I like that she kicks butt. But, this continues with the idea that Kara is somehow resentful of Clark and Jon. I just don’t see that. I’ll just put this in it’s own universe and be happy.

Agreed, don’t get the whole resentment thing either, would be a better book without it.

Right, why not she just went to the moon because she was mentally tired and Jon finally got a hang of it, you know after criminally bottling Metropolis and all.

Sounds better to me.