So some people on a different forum were making me very nervous about JLDs future. Saying to prepare for it to be canceled soon since JLO was canceled. I only read a few DC comics in print and 2 of the 3 were just canceled, so I was extra nervous haha. I went on Twitter and asked Ram V about it’s future. Here is his reply: 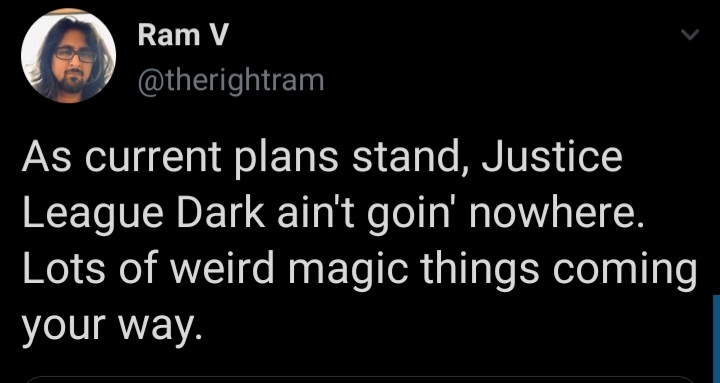 So yay! That’s good, right? I’m not sure if I should post it on the other forums as they’re so negative over there. What do you think?

Also where do you want JLD to go? We are getting a team shake up in October, who do you want on it? Me? My picks are:
Wonder Woman (selling point and muscle)
Zatanna (2nd in command and magic expert)
Solomon Grundy (here me out, he has the potential to be good lol)
Deadman (always liked having Boston there for a laugh)
Ragman (love his character, he needs to return)
Raven (She should join for sure, lots of stories that could be told with her on the team).

Your list is great. Not as direct members, but I think Dr Fate and John Constantine need to be regularly involved.

Doctor Occult is a good pick! And I would love to see how Guy would do with magic lol.

Oh yeah, for sure. John always seems to wiggle his way onto the team haha. And Fate is important, so that’s a good pick too.

Shazam would work as well

You know, I was thinking Black Adam could really add something to the team, if not Shazam.

Great suggestions. I would also add some of the members of Shadow Pact. I liked the chemistry they were building.

Sticking with characters I like that are on the fringe.

A WildStorm character is a good bet, since DC seems like they’re dipping their toes into reintroducing them.

I wouldn’t mind Voodoo at all. I’ve always liked her character. So adding a Wildstorm character like her would work well!

I just had a thought! Katana would be perfect for Justice League Dark. She has ties to magic, without being a magic user herself.

I love Diana and she’s a big reason why’ve I’ve really gotten into this iteration of the team, but I would like to see a shakeup in leadership. I’ve always wanted to see Batwoman lead a Justice League Dark time, think she would keep the team grounded while still brining a whole new dynamic. Keep Swampy and Zatanna, and swap out Detective Chimp and Man-Bat for Raven and Deadman.

I would love to see Batwoman lead with Zatanna as her second. Not only do I love Batwoman, she’s always had her foot in the door of the supernatural, way more then Batman.

Good line up, not sure if I would put Shazam in the same team as Wonder Woman, as they kind of fill the same slot, powerhouse fighter. But I love the idea of having Resurrection Man on the team, that could lead to some cool fights and stories.

I will miss Man Bat if he leaves. He has been a wonderful addition to the team and so funny and adorable. I’m glad they made him a hero and hope he stays that way, even if he’s not on this title.

I’m a huge fan of Justice League Dark, especially The New 52 series…Love the new series as well. With that being said, I think they should add Frankenstein from the New 52 series. Although he is not magical, he is built on science, and technology. But, he made an awesome addition in new 52.
Other than that, Swamp Thing and Zatanna are my favorites other than Martian of course. So Swampie and Z are a must.