Funeral for a Friend

Did the say in the storyline. I could see why Lois went Rogue in the alternate univer comic

Having just reread the issue, I really don’t think that was the case.

Huh they were there?

Because of licensing, Batman and family could not be used in merchandise. The Dc Cards set did not have Batman characters. 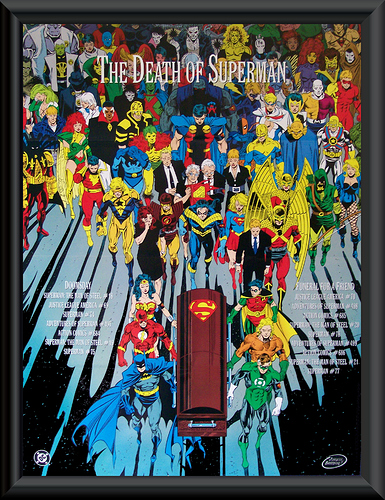 Well yes, the top guys like GL Hal Jordan, Wonder Woman, and Batman were all there, but they weren’t at the podium, and they didn’t carry the casket.

But yo. Darkseid showed up.

@AntLeon- right?! Wow. Talk about unwelcome guests. I remember when the death of Supe’s mania hit back in my high school days. I can remember racing over to my comics spot right after skating practice so I could get a copy of Wizard and read up on it. As I walked into the shop hanging on the wall behind the register was a huge poster (thx for sharing that same poster BTW @MichaelA.Wagner

) of the funeral procession and I remember thinking “Waitaminute- why is Darkseid there? And, oh, hey- there’s Grundy AND Slade Wilson as well?!” Darkseid and Grundy HATED Kal-El- why were they there? Just so random. So, like, was Darkseid just walking alongside the mourners and thinking to himself (in Michael Ironside’s voice of course

) “Mmm. So much sadness and despair among these hapless whelps. This pleases Darkseid.” Kinda’ crazy stuff there.

Because they saw him as an Equal even they had opposing Views think Obama v.s. McCain when the Racist Remark was Shouted at The Primaries campaign Rally the also have honor and Diginity even if there’s NO Respect

POSTER A. HAS Jean Paul Valley

Poster B. Has Spectre

@TheTerribleToyman I just realized that Darksied was at Supermans funeral and why didn’t they have Supergirl in Robins place? Would be a great question for @HubCityQuestion to answer?

She was in the actual storyLine this was just a promo

I know I saw my bad I was straight up reacting to the poster didn’t read anything before I commented.

I just realized that Darksied was at Supermans funeral

He’s only in the promo poster- Darkseid doesn’t attend the funeral in the actual story.

@TheTerribleToyman it has been around 25 years since I read it but I was just saying all this time never and I’m just now realizing it lol .

The League was different at this point. After CoIE. Jurgens had just started writing JLI (issue 61 I think), and it had been “Funny League” up until this point. The team was Guy, Blue Beetle, Booster, Maxima, Fire, Ice, and Bloodwynd. There were no heavy hitters exactly, though I imagine Maxima could throw a Volkswagen Beetle into orbit.

There were no heavy hitters exactly

Technically, Bloodwynd was Martian Manhunter in disguise. So there was one heavy hitter.

Wasn’t the “Death of Superman” Manhunter being mind controlled by Rott? I remember thinking it was him, but it wasn’t “him.”