Flash Season 8 is out and kicks off with the Armageddon crossover event. This thread is to chat, discuss, and more with season 8 of the show. So Enjoy 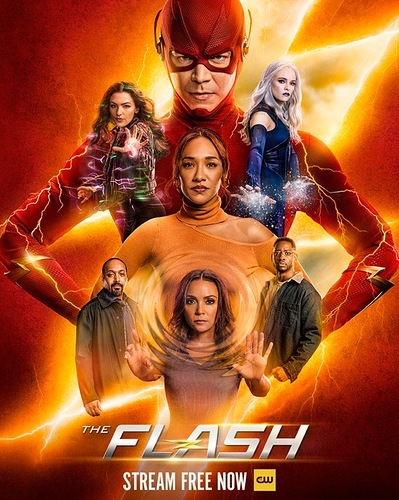 I have to say I liked the first episode of Armageddon. It was great seeing the Royal Flush Gang again. And then Despero!

I liked the first episode of the season, but I’m still in the boat that we don’t need Chester or Allegra. Any time we have a scene with them, I’m waiting for it to be over so we can get back to the main story.

I was so happy to see Despero’s monstrous form. I grew up with the JLI comics where that new look debuted. I was even happier to see the third eye. Dunno if the beard fits, but I’m guessing it’s to match with the actor. Also,
I liked his and Barry’s conversation at the end, giving The Flash a set amount of time to prove himself.

Nice start to the season and crossover.

Alegra gets promoted and the citizen looking new and snazzy. She learns some lessons and rises to the challenge. Or as the show would say level up.

Iris is doing the same. Seems she has gotten the red hair this season and is still dealing with some after effects of mirrors but overall seems to be doing well.

Frost is off doing her thing Katlyn seems to be ready to get back out there nice.

Atom is back. Great return from him. Him and Chester go in their adventure and level up to balance in game superheroes and life. Nice.

Flash takes on the Royal Flush Gang who also have leveled up. Cool. And his flash time was great and fun banter with Kramer was cool too. But definitely seems like he’s leveled up (tired of me saying it yet​

. Glad they incorporated his monster form and used way more that I thought they would have. And now the flash has 7 day to prove him self.

Makes me think it flash whose done this or is it Thawne. Or maybe even Red Death

Will Flash be able to prove himself? Who’s next to join our heroes? Does flash really destroy Central City? All this and more Same Flash Time Same Flash Channel.

The Flash completely ret-conned the Royal Flush Gang, unbelievable! They were one of Arrow’s first villains, not The Flash’s! Despero is an intriguing villain. Seeing Ray was great!

The Flash completely ret-conned the Royal Flush Gang, unbelievable! They were one of Arrow’s first villains, not The Flash’s!

Chalk it up to a post-Crisis change, I guess

That’s how I took it, too. Didn’t bother me. I liked this version of the Royal Flush Gang.

I do wish they could’ve spoken in more than just card puns, but their powers/abilities were definitely cool

Alternate title for this episode: Barry Allen and the Terrible, Horrible, No Good, Very Bad Day

So after part 2, I have a theory about how this is gonna end, and I’m not sure if I actually want it to come true

Given the huge status quo shifts being presented – STAR Labs facing demolition, Barry being investigated on a federal level, Flash losing the city’s trust and, most of all, Joe having died 6 months ago – and the fact that we know Thawne will also be involved w/ different time periods already playing a role, I can’t help but think this is all just gonna be reversed by the end of the event. Flash will be a hero again, Barry will have his job, STAR will be saved and Joe will be alive. There are just way too many huge developments being presented in such a short amount of time for them to all stick, but the thought of this leaves me conflicted

On the one hand, I’d really hate for this to all be permanent. I wanna see Barry as a full hero doing the job he loves w/ his team having the right setup as STAR. I especially don’t want a character like Joe, who’s been here since Day 1, to be relegated to an off-screen death, since he deserves so much more than that. But at the same time, if this all gets reversed, then what the hell would even be the point of this event? Sure, the crossover characters are awesome and I’m still looking forward to seeing that get ramped up in the latter half since that aspect has been surprisingly sparse so far, but we need more than that for this event to really matter. If things just get reversed, then this event will ultimately have had no real effect on the show’s overall story, and that’s the last thing I wanna see from something like this

I know we still have more than half of Armageddon left so there’s obviously a lot of different ways this can all play out, but I can’t help but start to dwell on this possibility in the immediate aftermath of the latest episode

“Armageddon Part 2” was a big of a mixed bag for me. On the one hand, there were some very interesting things happening in this episode. Barry is being investigated by the Federal government. Central City thinks The Flash has turned evil. STAR Labs could well be destroyed. Joe died six months ago, but Barry doesn’t seem to realize that. I can’t help but think someone is behind all of this. I seem to recall from the initial press that both Thawne and Darhk are supposed to appear in “Armageddon,” so I think they may be behind all of this. On the other hand, I thought Xotar wasn’t a particularly interesting villain. Oh, her powers were interesting, but she really didn’t seem to have much of a personality. She seemed more like a plot device than a character.

At any rate, it was good to see Black Lightning again! His appearance was the one thing in “Armageddon” that I was looking forward to the most.

I cannot wait to watch this

Feel free to share your thoughts on the new season once you get a chance to watch.

Barry would’ve known, so it wasn’t Crisis unless they say it.

Great alternative title, haha! So accurate! The city is scared and will probably hate Barry, now he knows how Oliver felt for years.

This episode was way better than last week’s, Joe cannot be dead!!! How are we feeling on Despero? Is he actually trying to do good or is he playing us?

Barry trying to not loose his mind. Seems to go well until it doesn’t.

Suspended from his job the loss of start labs and Gideon. Some big changes there.

Chester making the weapon for Frost. Learned some more about him. Nice.

Barry vs Xotar. A battle of the mind. Interesting stuff there with the insanity and lighting burst. Very cool stuff.

Then the big news. Joe’s has been dead. I was wondering what happened to him definitely seems crazy. And the Flash looses it. Him or someone else (I think Reverse Flash) cause if trouble. Despero has some origins reveal via the new DEO and Alex. Now he his ready to hunt and Barry on the run to the hall of justice to meet Black Lightning who I’m exited to see back.

What Barry’s next move? Has he really lost his mind? Will Despero hunt our hero? All this and more Same Flash Time Same Flash Channel

Agree on your first point - many of Chester and Allegra’s scenes were clearly filler ten seconds in (which meant some of Ray’s scenes sank to that level, as well).

Ray’s return as Atom was great, but too much beating around the bush before arriving there. Bonus points for his displayed use of powers actually relating to those of the Atom of the comicsThis text will be blurred

The last scene was horrible. Flash and Despero just got done battling inconclusively - why would Despero suddenly decide to settle for a conversation? Why would we think Despero will give Flash a fair evaluation? Why would we care about Despero’s opinion? Worst of all, if Flash just needs to avoid showing his “dark nature”, all he needs to do is vacation in Maui for a week? And if Despero is convinced Flash will one day wipe out the planet, why would he be idiotic enough to disregard that knowledge based on seven days of good behaviour?This text will be blurred

So this decent episode ultimately serves mainly to set up a sappy story arc that probably includes Barry questioning his motives for 20 minutes of each episode.

I really liked “Armageddon, Part 3.” This was primarily because we got to see Jefferson Pierce again. It was great seeing a fight between him and Barry. More importantly, it was great seeing Jefferson bring Barry around. I thought it was fitting that he reminded Barry of the sacrifice Ollie made. It was also great seeing The Top again. One thing I loved about this episode is that it actually dealt with grief in a realistic way. I think it is one aspect of life that too many shows just get wrong. And I love that it was through her love and grief over Joe that Cecille was able to defeat Despero. As to the end, somehow I figured Thawne was behind it all. I know many of us had figured that out from the beginning.

Good episode until the boring as hell ending with Thawne, this show just overuses him over and over again, it’s ridiculous. Jefferson was great though.

First Joe may not be dead. Iris and Allegra are on the case. A mystery with the still force as Turtle 2 appears. Interesting.

Then team flash is trying to find Barry. Top returns and her and Cecil team up to find. The Despero trick them all but her grief saves them as this sadness even though how hard makes her stronger. Great stuff between her and Katlyn.

Then Barry activates the Injustice protocol. (Cool Easter egg with that). Jeff doing his usual thing of helping people and being awesome™

. Great with Oliver to boost Barry back. Now in the future and all is revealed.

Reverse Flash harnessed the negative still force and changed time. Barry is an enemy and all seems wrongs as It looks like Batwoman, Ryan Choi, Alex and more are there. What a twist?

What happened to the future? Will Flash be able to fix it all? What’s next in Despero’s mission? All this and more Same Flash Time Same Same Flash Channel