I have just finished all 13 issues of Flash: The Fastest Man Alive that can be found in the comic library here on DCU.

I remember reading this title when it came out and it was my first experience in the Flash universe. I sadly haven’t dived into other titles outside of Flashpoint, which I plan on changing. To get back on topic, this title is simply outstanding. The first issues feature Bart Allen a year after Infinite Crisis. DC had a huge initiative where all of the titles were a year after that event. Bart cannot remember exactly what happened during the fight with Superboy Prime and he is fighting the fact that he is destined to be the Flash. A lot of inner turmoil and character building in these first issues that made me smile. Meanwhile, the action that happens is often forced upon Bart. He often tells Jay Garrick and Iris that he doesn’t want to be the Flash. Then an explosion happens and he is forced to use the Speed Force to save his friend Griffin.

Griffin is an annoying frat bro who I couldn’t believe Bart would hang out with. From the explosion, he gets powers and decides he wants to be a hero and put Jay Garrick out of the superhero game. He is often reckless and has no care for human life. Bart and Jay see and try to prevent the body count from growing but often cannot prevent as much as they would like. Then Griffin makes the mistake of attacking Jay. Bart will not stand for this and he joins in and helps take out Griffin.

Meanwhile, in the personal life of Bart Allen he starts dating Valerie. She is smart, cute and sincere. Oh and she is the daughter of Flash archenemy Manfred Mota. He joins up with Inertia, kidnaps Val and is not in human form anymore. To be honest, I didn’t enjoy this story arc as much as I enjoyed the Griffin arc. It didn’t seem to make much sense to me but it did work as a bridge to the final arc.

During the final act of this series, Inertia gets the Rogues and they work on a mysterious plan to kill the Flash. There are bickering, backstabbing and a lot of action. Iris throughs in some much needed time traveling knowledge that leads to the end of the series.

I really enjoyed this series and need to read more Flash in my near future. Has anyone else read this and if you did, did you enjoy it? What other Flash series should I seek out that are on DCU? 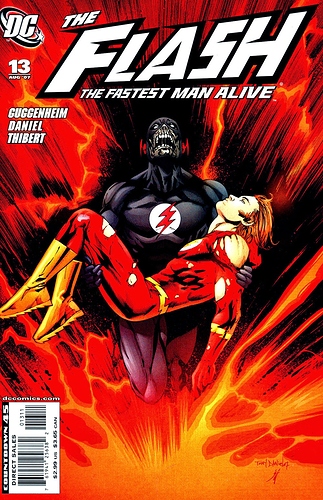 How good is it? Looking for something read alongside long halloween

I really enjoyed this series. It is a quick read and a nice break from the New Teen Titans that I have been binging.

It is awesome. The use of Black Flash was amazing, and when the Rogues win!!! Whew
So good.

If you enjoyed this, you may want to go check the Impulse where Inertia came from.

Black Flash was epic!!! I just wish there were more stories before the ending

This series was also overseen from issues #'s 1-8 by Danny Bilson and Paul DeMeo, who were also involved in the 90’s Flash TV series. I was highly anticipating this series in the lead up to it’s print release largely due to their involvement.

A short-lived solid series, but the really good stuff came before courtesy of Waid and Johns. Those runs need to be here.