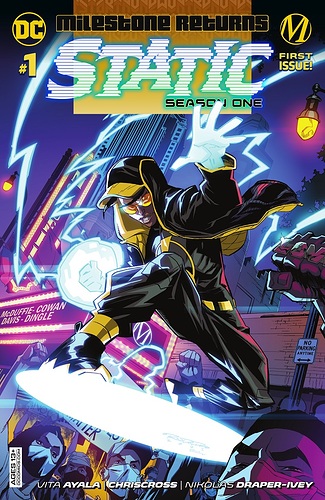 It’s taken far too long, but Virgil Hawkins—better known to millions of fans as Static—has returned to comic racks with Static: Season One #1, the first ongoing series released as part of the new Milestone Media. Originally conceived to fill the slot of a wisecracking teen hero when Static first debuted in 1993, creators Dwayne McDuffie, Denys Cowan, Derek Dingle and Robert Washington III soon crafted a more human world for Virgil within the wild and cosmic universe of Dakota. It was that special blend of comedy and drama that brought the character to the small screen in animated form, and through that television series, Static’s appearances increased to where he’s now an icon of Black superheroes. But there’s more to the turbo-charged teen than just his origin story. Let’s go through a list of five things the average fan might not know about Static.

Static Can Do More Than Just Zap You

Contrary to popular belief, Static’s electromagnetic abilities have a much wider breadth than just the power to shock and electrocute people. Creator Dwayne McDuffie had a master’s degree in physics and wanted Virgil’s geeky personality to come from a place of real intelligence. As such, Virgil often uses his abilities in a variety of unexpected ways, even surprising himself with new discoveries.

Many of his capabilities are derived through his electromagnetism, which he employs to levitate himself across town. When he was first starting out, Virgil would fly on metal trash cans and sewer covers, but eventually he developed his Static Saucer—an aluminum disk he uses to travel at a moment’s notice. His powers also enable him to control any electronic machinery or technology, and even increase his healing factor. An example of this can be found in his New 52 series, when his arm was sliced off at the end of Static Shock #1. In issue #2, it instantly reattaches itself, leaving only a minor bruise. This discovery freaked Virgil out, as the new limits he was learning about himself were happening at too fast a rate for him to handle.

To learn the other shocking facts about Static, head on over to DC Comics!

Are you excited for the return of Milestone Comics and the new series of Static?