First Look: When the Saints Come Crashing In 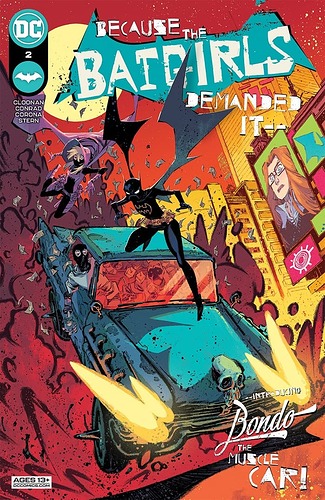 Disconnected from Barbara Gordon’s powerful Gotham network and painted as criminals and terrorists by the insidious new hacker know as Seer, the newly minted team of Oracle, Spoiler and Orphan—aka the Batgirls—is supposed to be lying low. Settling into a new loft without access to Bruce Wayne’s now-lost billions, the Batgirls now must adapt to a new way of operating, one based on stealth, strategy and picking their moments. They can no longer act without considering the consequences. These days, when they’re attacked by a trio of over-armed Simon Saint fanatics, they won’t engage them half-cocked. They will strategically retreat and together they’ll collectively form a plan and—

What? They’re not doing that? Well, that figures.

To learn more about the new issue of Batgirls and check out some variant covers, head over to DC Comics!

Are you excited to check out Batgirls #2 on January 11th? Let us know in the comments below!

With that title I was hoping it was about Drew Brees, Pierre Thomas, Marques Colston, Lance Moore, Jahri Evans, Scott Fujita, and Thomas Morstead.

Looking forward to it, but I really hope everyone doesn’t get new names. I like the other code names they already have.