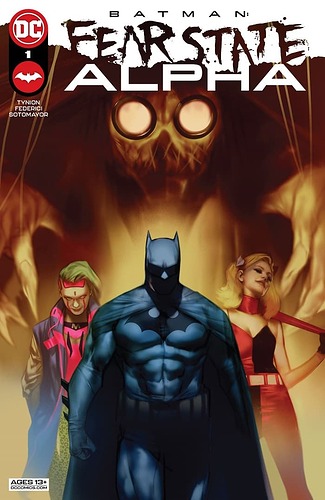 Dr. Jonathan Crane—the Scarecrow—has caused the Bat-Family to see some of the most terrifying, unconscionable sights while under the influence of his fear gas. He’s brought the world’s strongest people to their knees while driving lesser minds clinically insane. And yet, in Batman: Fear State Alpha #1, he does something that may be more terrifying than anything else he’s accomplished in his eighty years.

He partners with Simon Saint.

The powerful, influential mind behind Gotham’s newly unleashed team of genetically enhanced law enforcers—the Peacekeepers—is a fan of Crane’s work and a believer in one of his more provocative theories about fear and cultural evolution. And with Saint’s financial backing and political influence (more than enough to get Crane out of Arkham Asylum) it appears Gotham is about to become a living test case as it enters a period of relentless trauma and horror—a “Fear State” specifically designed to push its citizens into a new phase of accomplishment.

Or those who don’t die in the process, at least.

To take a peek at some of the pages for Fear State Alpha #1, head over to DC Comics!

Are you excited for Batman: Fear State Alpha? Let us know in the comments!

I have been enjoying the build up for Fear State throughout the Gotham based comics. Initially, I was going to pass on Fear State but this past week I have added it to my pull list.

Yes! We of course need more stories with the villain worthy of being the arch nemesis of Batman more than the Joker, Scarecrow, as a main villain more often!

Edit: I am looking forward to reading this story.

Prepare to be scare!

Nice to see Scarecrow getting alot of attention. Hope it’ll be good.