First Look: The Origins of the Monkey Prince 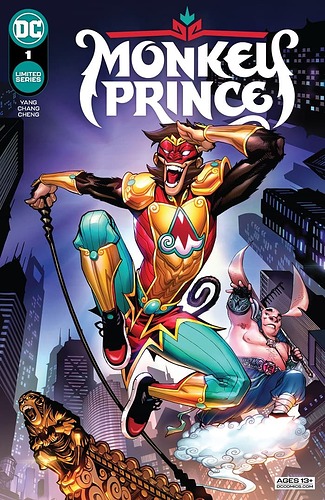 You may not know the name Marcus Sun now, but if he has anything to say about it, it’s only a matter of time. The young hero has fought with, against and as Shazam (you had to be there) and taken on no less than the forces of Apokolips (well, a gang of parademons, at least). In fact, he may be new, but Marcus—a.ka. the Monkey Prince—is nothing less than the greatest superhero to ever set foot on Earth-Prime. Only…maybe don’t actually call him a “superhero,” because he hates superheroes. Even if he also happens to be best friends with one of them.

Look, we promise this all makes perfect sense. Or, at least, it will if you read Monkey Prince #1 when it hits shops next Tuesday.

To learn more about Monkey Prince #1 and check out some amazing variant art, head over to DC Comics!

Will you be picking up Monkey Prince #1 on Tuesday? Let us know in the comments!

Will you be picking up Monkey Prince #1 on Tuesday?

Indeed. I recently re-read Monkey Prince #0 to get ready for #1, and I’m looking forward to more of the prince’s adventures as they begin to unfurl next week.