First Look: The Aquamen Are Dangerous When Wet 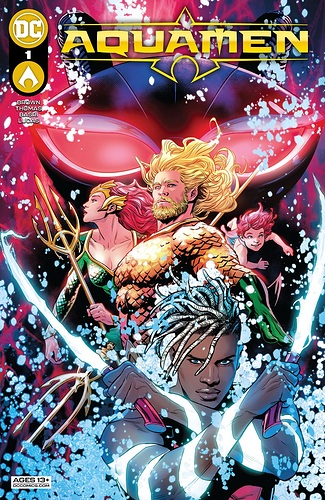 The ocean is a big place. Why should it only have one superhero?

Let’s face it, heroism is a hard business and there’s no reason any costumed crimefighter should have to do it alone—even if they do happen to be a part of the Justice League. Aquamen, an unprecedented new aquatic action series spinning out of the just-wrapped Aquaman: The Becoming and Black Manta doubles up on the book’s protagonists, giving equal time to both the original Aquaman, Arthur Curry, and the newest, Jackson Hyde. Written by both Chuck Brown and Brandon Thomas and illustrated by Sami Basri, Aquamen firmly builds out the legacy and world of its titular hero, ensuring that the planet will always have an Aquaman at a time when the need for the environmentally minded hero has never been greater.

To learn more about Aquamen, head over to DC Comics!

Are you excited for Aquamen #1 on Feb 22? Let us know in the comments!

Aquamen #1 is easily my #1 most-anticipated new release for next week (yes, even more than Action Comics #1040 and Blue and Gold #6

). I’m jazzed about it not only because Arthur is back to monthly adventures outside of the Justice League, but that the series is also yet another starring gig for Jackson Hyde.

I’m hopeful that Aquamen will also bring back older characters from Aquaman lore, when and where apropos. Maybe a Fisherman reinvention?

Are you excited for Aquamen #1 on Feb 22? Let us know in the comments!

As you command. Yes.

I’m excited for sure.

I just have to catch up on those mini-series first. Man, sooooo much to read.