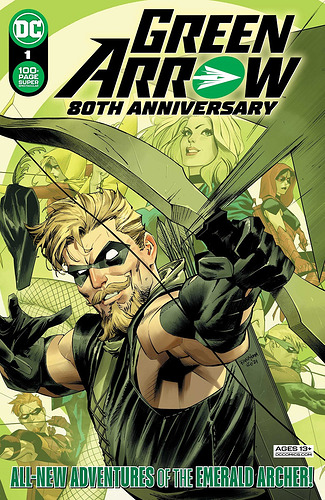 From his dogged optimism to his signature weapon—which was deemed obsolete by most people centuries ago—Oliver Queen has always felt like a bit of an old soul. So, it almost feels appropriate that he’s celebrating his 80th Anniversary this year. Green Arrow’s the sort of character who could easily have existed for far longer than that. And yet, he’s never been more relevant than he is right now. Ollie is a champion of the people, a man born into luxury who has never embraced or trusted the 1% he’s a part of or the governments and corporations that prop them up. He was progressive before most of today’s progressives were even born, and you get the feeling he’ll still be passionately fighting for the cause when today’s activists are long gone and buried.

But for now, he stands alongside us, fighting impossible fights armed with little more than his brain, physical prowess and however many arrows he can fit in his quiver. The 100-page Green Arrow 80th Anniversary Super Spectacular is a celebration of that spirit and its comic book history. Featuring the work of over two dozen writers and artists who have contributed to the Green Arrow legacy or been inspired by it, it’s a must-have collection that reminds us of how little it can take to change the world. Sometimes all you need is a bow.

To check out some sneak peek pages of “The Last Green Arrow Story” and to see variant covers for Green Arrow’s 80th Anniversary 100-page Super Spectacular, head over to DC Comics!

Are you excited? Can June 29th not come soon enough? Let us know in the comments!

Well, damn it, now I want an ongoing Old Man Ollie series.
(And not just because that first frame means that Old Lady Naomi is out there somewhere, patiently waiting.)

Same here – between their great run on Green Arrow and their experience doing Old Man characters over on the other side, I would love to see that. Who knows, maybe this will clear the way for such a series!

Pretty sure I am excited about each and every story in this one.

I’m getting my 80th anniversary fix of Ollie via the Green Arrow: 80 Years of the Emerald Archer collection, current issues of Justice League and the New 52 volume of Green Arrow.

I’ll catch this book on DCUI come December. As 2021 comes to a conclusion at that time, this book will then be the perfect note to conclude Ollie’s 80th upon.