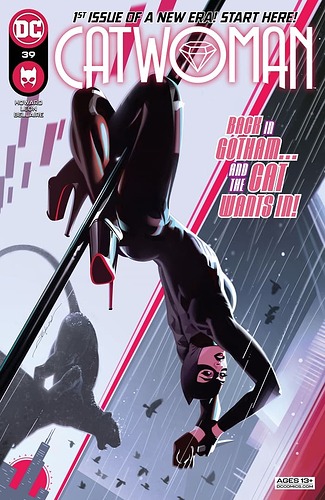 Selina Kyle’s been on quite a ride since nearly marrying Bruce Wayne, spending time in sunny Villa Hermosa before setting a stake in Alleytown, the blue-collar borough that seemed to draw far too much attention from all the wrong people. However, Selina’s always been a Gotham girl at heart, and with next week’s Catwoman #39, she’s returning to the iconic city…and to its even more infamous underworld.

The debut chapter written and drawn by Catwoman’s stylish new creative team of Tini Howard (writing her very first DC ongoing series) and Nico Leon, issue #39 shakes up Selina’s status quo, returning her to the world of glamour and crime in which she thrives. Declaring war on Gotham’s powerful mob bosses, Selina seeks out help from an old—and potentially dangerous—flame, while finding herself entwined with a charismatic masked man named Valmont, who claims to represent a collective of thieves. Of course, after leaving her Strays in Alleytown, Selina would prefer to fly solo, but is it possible the key to winning her war against the crime families may be found within Valmont’s intriguing offer?

To get a sneak peek at the new issue and check out the variant cover, head over to DC Comics!

Are you excited for Catwoman to enter a new era? Let us know in the comments!

I’m definitely intrigued. I haven’t read a lot of the writer’s previous work, but It looks like Howard is invoking the Genevive Valentine run of Catwoman, one that I definitely enjoyed, and in a way that doesn’t invalidate and feels like a continuation of Ram V’s really damn good previous run on the book. So yeah, definitely giving this one a shot.

I’m interested, but a bit hesitant. The run feels like it’s going to be snide and obnoxious on purpose, and while I understand the intent and appeal, it doesn’t appeal to me at all, sadly. I much prefer a much quieter, darker noir approach like Ram V and Valentine.

I’ve seen and read interviews with her for her X-Men work and I’ve liked what I’ve heard, but not quite ready to go down that rabbit hole. I’m super behind on the Catwoman book, but may grab this one.

Is Selina working at a strip club in this?

It does make me think of the excellent DC Showcase: Catwoman animated short.

From the preview pages, it looks like she is listening into a group of mobsters by disguising herself as one of the dancers. That’s why she monologs about how these powerful men would be mad if these women weren’t performing around them, but these men don’t really look at them or notice them.