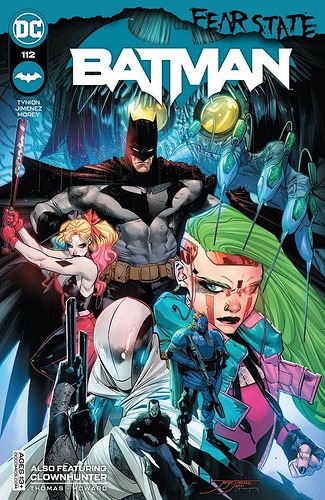 We’re used to seeing Batman calm and rational, even in the face of unspeakable terror and overwhelming odds. He stares down death every day, both on the streets of Gotham and in service to the Justice League, where he often stands against cosmic-level threats who can shape reality on a whim and fights them off with batarangs. (Seriously, we’re not sure how he does it.) Batman has locked wits and tested his will against Bane, stared pure chaos in the face during the Joker War and fought his own literal demons from the Dark Multiverse and he’s done it all projecting a calm, cool confidence that made it clear the outcome was never in doubt. Not to him and not to the rest of us.

All of which is to say that when Batman gets scared, we get scared. And Batman is clearly very scared as “Fear State” begins in next week’s Batman #112. For months we’ve seen him tormented by the Scarecrow, a prisoner of the newly enabled master of fear. However, we’ve never known how Bruce found himself in that state. Was it possible that he allowed himself to be caught as a way of stopping Dr. Crane? Was Bruce secretly in control?

To get a glimpse at some variant covers and internal pages, head over to DC Comics!

Are you excited for Batman #112? Let us know in the comments!

I’m definitely looking forward to Fear State – that said, I do worry a little that this will feel like a repeat of what Bruce was going through in The Joker War, where he was losing his mind from seeing Alfred everywhere.

We all know Bruce’s greatest fear is losing those closest to him… There’d better be plenty of different everyone-dies-and-it’s-all-Bruce’s-fault scenarios! And… Is it too much to ask for one snake-clown?

Also, I could fully see this being a Doctor Who-style thing where you’re never quite sure what’s real. To quote probably the funniest line from Series 5:

One last thing: I do love the scene in Batman: Knightfall where Batman’s greatest fear is Jason’s death, but - and I guess it’s just because Jason’s death had already happened, and Bruce knew what the gas was, but he couldn’t just tell himself it isn’t real - I would’ve thought - and maybe I’m just projecting - that it would be harder to lose - obviously Damian, because he’s family, but also Tim, or Harper, or Maps - one of the ones who weren’t orphans or the children of supervillains, or at least had a sibling… Someone whom Bruce would have to take their body to, knowing it was his fault and they could have lived a full life. I’m getting really dark here, aren’t I? Good! You thought Gotham was a nightmare before? Well, now it’s a nightmare inside a nightmare inside a nightmare inside Hell!

I’d really like to see the Future State Gotham City come to fruition. Mainly, of course, because I want to see how Jace Fox fits into all of it…

Hopefully “Fear State” will lead us there.

Somewhat related (but not really… ): 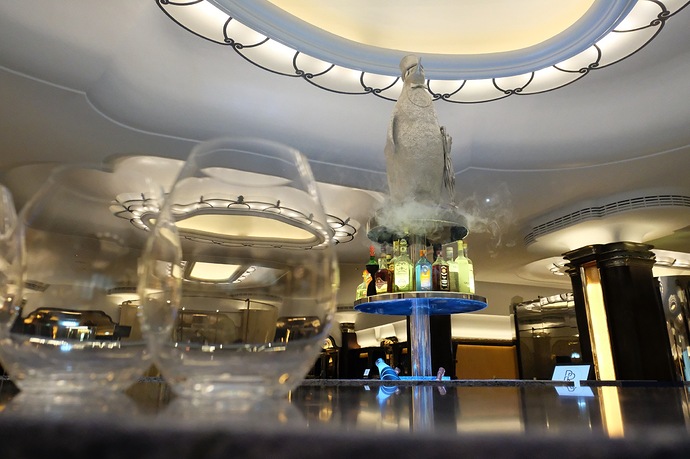 There’s no Bat-signal roaming the ceiling of the cavernous Park Row, no golden lasso or tiara under a glass case, no Green Lantern cocktail heavy on the creme de menthe. For a DC Comics-endorsed restaurant, it’s light on the cringe theme-restaurant tropes.

But there’s some spectacle — and a lot of love for DC — hidden beneath all the fine trappings.

Opening earlier this month in the center of London, Park Row is pitched as a dining experience that takes you to Gotham without the need to wear a costume. In fact, the restaurant’s FAQ notes “Dress more Bruce than Batman,” and there’s actually a ban on people cosplaying inside the venue.

I’ve visited both tech-laced and themed restaurants for work and pleasure, and Park Row feels a little different, in that it seems entirely made for grown-ups. The idea is simple enough: DC universe meets fine dining, with an immersive high-tech experience inside the Monarch Theater (named after where Batman’s parents were shot) as the showstopper event. Bookable in advance, its £200 ($275) tasting menu is a barrage of 11 themed courses that guide patrons through the heroes and villains of DC.

I had been reading about this and now it’s finally open.

If it does well, maybe they’ll open one in the Gotham City here; in New York. It would be a great place for dinner and a movie for the presumably second (of three) Robert Pattinson The Batman films.

I’m sorry, they made a DC restaurant and they didn’t name it Planet Krypton???

On this Batman run, I’m a fan of Tynion’s writing, but I can’t stand Jimenez’s art. It doesn’t look clean.