It’s definitely a new look, at least for cinema. The faux-Imperial March theme was kind of funny.

So far looks pretty awesome. Looking forward to seeing the rest of the suit and the first trailer.

As someone pointed out earlier, it does have an Arkham game style to it. I heard that they might have the white eyes feature to it, as sort of a visor kind of look over the eye pieces, but not sure if that is entirely true.
I can’t wait for the Batman.

If Matt Reeves is drawing inspiration from Year One, then I think this suit will be a much more tactical and combat driven design. Later in the movie or sequel we’ll start to see more technology driven iterations as the need for advanced crime solving techniques arises.

Oh yeah! That would be incredible! Batman has always been an edgy character so I wouldn’t be surprised if this was the case with the new storyline.

P. S. Looks like someone is trying to 1-Up your awesome username, @GrilldCheezer.

From what I’ve read, it would seem that the bat symbol is made from the gun that killed his parents.

I also thought the suit looked like it was from Arkham Knight when I saw it. The bat emblem looked familiar too. After a while it finally hit me, it resembles the batarang from the Arkham games.

Remind’s me of the Netflix daredevil show with the black and red. Thought the music sounded pretty cool but was hoping they’d go for a more classical Batman look & less “puzzle -piece” armor but won’t make any final judgement 'till we see more. Hope they give him longer horns with the cowl this time around too.

I was originally thinking as Zombedy, that the emblem was detachable and would be some kind of Batarang, But rumors are swirling now online and i havent read all the comments here so if it has been said, then bravo and get ready for a repeat, it might be the hand gun that was used to kill Bruce Waynes parents, which is a nod to a reference in a Batman story some where. An taking a look at it closer, it does kinda look like gun grips, if you split the handle in half… I wasn’t that stoked that they left the ears off the bat emblem, but if it does in fact connect to the comic book that would be cool and for me make up for the missing emblem ears.

That and others have mentioned we didnt get a look at the ears on the mask, which is true so no telling how low or high they will be, but so far pretty boy Pattionson is not looking terrible. I am just grateful we are done with Ben Affleck.

Only thing I am wondering is how this story is going to play out, as a detective story or adventure, and how much time is going to be spent on a back story or do we leap right into things. Hopefully they don’t over sexualize catwoman. Anyhow, less this movie crushes the box office opening weekend, I will wait till it comes out to rent. An even if it does crush the box office I will wait at least a month till the hype dies down so I am not stuck in a crowded theater / #antisocial

P.S , In music, you are either a fan of the Beetles or Elvis, Here, I imagine the similar being an Affleck fan or not. I am completely not and never will be a fan of Ben Affleck ever, for any reason. If anyone likes him good for them.

For me best Batman actors are Michael Keaton , Christian Bale and of course Adam West. I am giving some slight hope that scrawny pretty boy Pattinson can look some what muscular and pull off being Batman.

Wow, I’m not a huge Batman fan, but Pattinson looks good in that suit! That suit hypes even me up to see this version. The suit doesn’t look like the same cookie cutter mild for the bat suits. Looks more stylized and that it may for with this particular telling. It looks like one that will evolve and change as he gets more skilled at being Batman. So I hope the year one type rumors are true, we will see since this really is just a first look. So much more goodness will be leaked before it comes out I am sure.

Wasn’t sure about Pattinson being Batman at first but I’m coming around to the idea of it and I have high hopes for this movie! There can never be too many Batman movies out there!

I’ve heard from alot of people talk about the emblem being made from the gun that was used to kill his parents. The problem I have with this is it isnt based off of anything said by anyone attached to this project. It seems to stem from a Kevin Smith Batman story. Could be, but as a man from a family of “gun nuts” there is nothing in that symbol that resembles any part of any firearm I’ve ever seen. I mean, it looks like it has hinges and belt clips. Guns dont have these things. Pretty nonsensical features if its just a symbolic reminder for Batman. Again, it could be, but there is nothing to suggest it beyond fan speculation.

Bless you for sharing!

It kind of looks like a pistol grip from an ar, but with the belt clip they sell for subcompact guns like my ruger lc9.

I agree, as former infantry and a gun nut, it is hard to see what exact peice of a firearm that would be… that being said… I have seen some… interesting things done to firearms, so

Suit is good. Actor isn’t giving me Batman vibes in it. It feels more like Daredevil or Nightwing or a villain (a weird mix I know, but those are the vibes I’m getting). I’m expecting a more natural rugged look. It feels like he is trying so hard to look badass that it doesn’t come out natural.

If that turns out to be true, this movie is really changing the game! I’m looking forward to seeing more teasers since we still have at least a year before the theatrical release.

At first I was not sure what to think of Robert Pattinson as Batman, but now that I have seen it, I kind of like it.

Bosslogic image of what ears could look like. Whether they are taller or shorter or even old school set at an angle, seemed easier to picture with a full head shot. 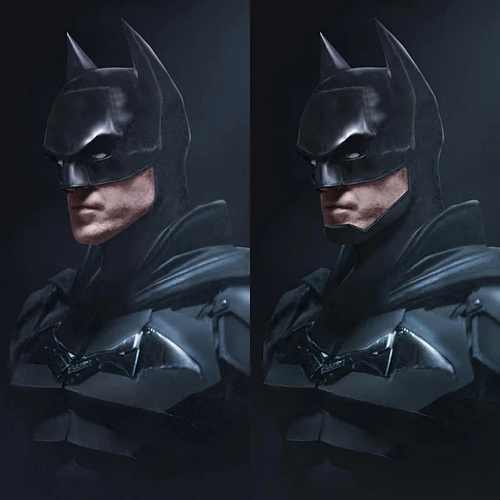