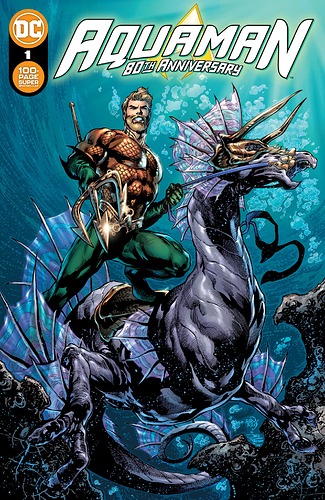 Aquaman is back with a whole host of new tales involving familiar favorites (both friend and foe)! Let’s take a first look at what’s in store… 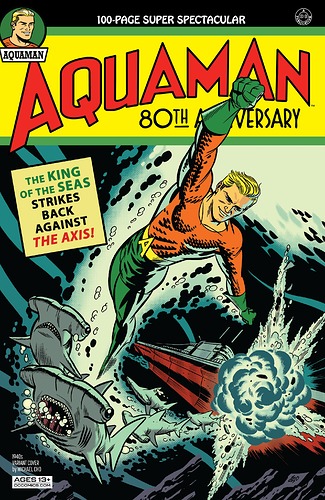 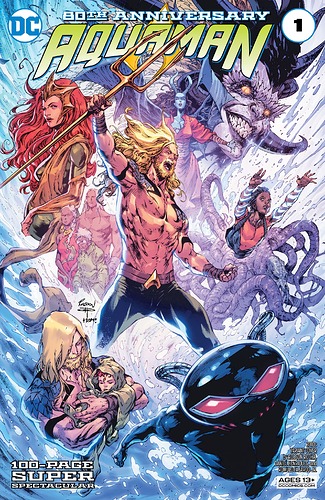 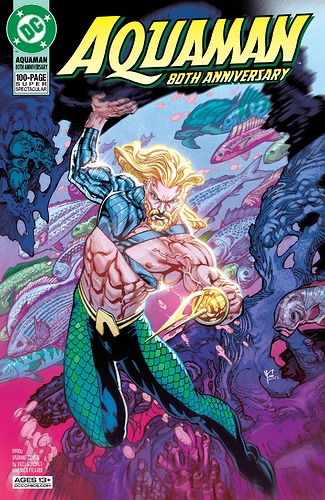 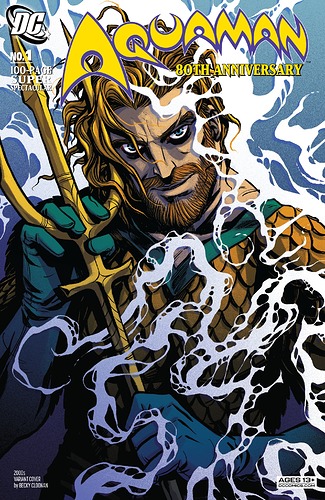 Synopsis: After defending the seven seas for eight decades, it’s time to throw Aquaman a party! This all-star-filled anthology spans across the ocean king’s legacy, not just celebrating his own triumphs, but also those of his greatest allies and enemies. We look at his ongoing romance with Mera, his bitter rivalry with Black Manta, his brotherly conflict with Ocean Master, and the inspiration he lends to younger heroes like Tempest and Jackson Hyde, the newest Aqualad. It would not be an Aquaman celebration without also looking at how he’s changed over the years, including a brand-new tale of Bombshells Aquaman. This special brings together Aqua talent past, present, and future, including reuniting fan-favorite creative teams such as Geoff Johns and Paul Pelletier, Dan Jurgens and Steve Epting, alongside Dan Watters and Miguel Mendonca. Plus, two of the stories are prequels to two new Aquaman miniseries launching in September, kicking off another 80 years of undersea adventure!

Are you excited for another 80 years of Aquaman? Let us know in the comments!

I’m really excited to read this! I am woefully behind on my Aquaman reading.

This looks so cool.

how many issues is it?

Picked this up today and have already read it. Loved each story and the different iterations of Aquaman that were presented. They worked in a lot of the supporting characters over the years but mostly I got this for the two storylines that will lead into “Aquaman: The Becoming” and “Black Manta” miniseries that start later this month and this didn’t disappoint. I’m really looking forward to the Black Manta book and this set it up nicely with essentially a pre-credit scene/story that whets the appetite.

This also succeeded in making me want to read more Aquaman books. I like the character but I really like the artwork for his stories - the characters and action being underwater give it a depth and a different look from every other book and I enjoy it a lot.

I really liked the Arthur and Orm story. The two POVs are so different at a fundamental level.

I was a bit disappointed with the book overall as it didn’t seem to showcase many different eras of the character or have the flow through time that the Green Arrow one did. Almost every story seemed to have the modern version of Aquaman (long hair, beard, tattoos) with a few notable exceptions. I thought most of the stories were decent though.

I always try to get these Anniversary issues. I enjoy the different stories from the various writers and artists. Hope to get one soon.

Would have picked up if there was a Golden Age era story. Dude hasn’t appeared in the GA since Roy Thomas All Star Squadron #60 where the GA Aquaman made his first and only modern day appearance.