I have a young cousin obsessed with villians, he hollers for the ‘bad guys’. He has seen my comics and is very interested, however I do not have kid friendly comics and he surely is not messing with my collection. I read online and bag and bored my comics, plus I have like Killing Joke first print, etc. Hes going to be 4, my son is learning to read and has became more interested in the words and the stories than just look at pictures. Is there a DC comic run that is kid friendly? Preferably some kind of Batman? My son has Teen Titans Go and enjoys them when we read together because they’re like the cartoon. I wanna start the 3 year old out early, my son has always just got whatever comics. I feel like with someone else’s kid I should be more careful this holiday season!

There was a title based on Batman the Brave and the Bold that was really good. Also The Batman Adventures based on the 90s animated series though I’d say that’s better for an older kid (in the ten to twelve range).

Yeah Batman Adventures is also pretty pricey nowadays (thank you Suicide Squad ugh). I was contemplating Lil Gotham the hardcover full run? I’ll check out Brave and Bold, he watches the shows so it can’t be any worse right lol?

I’d don’t really know of any actual comic books that are are age appropriate for a child that young. Children of that age usually don’t have the finger dexterity to handle the quality of the paper without ripping and tearing it. There are a few little golden books on the market that might be a better starting place if you want to introduce DC characters, but I’m not sure if there are any villain books or not. 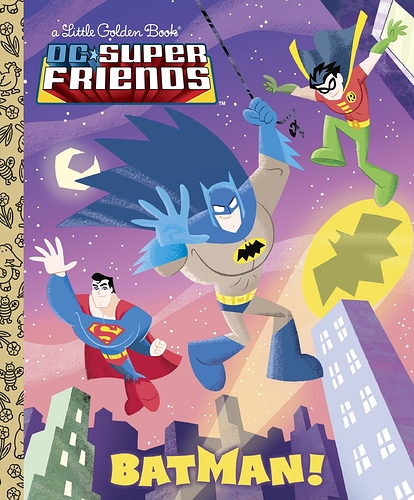 yeah unfortunately villians are pretty much comic Exclusives which is crazy to me. Not everyone loves a hero! My son has been in love with Joker since he was like 2?

My 4 year old (5 now, but started those when he was 4) loves the Scooby Doo Comics, Hero Cats, Moon Girl and Devil Dinosaur, and so,e of the older DC and Marvel comics we have read to him. Some of the really old stuff is way more tame than nowadays

never heard of it hmm

I bring my son with me to the comic shops sometimes and I honestly just let him buy what he wants. He’s already familiar with the DCU through the games, cartoons and movies so he knows what he wants.
He’s seven right now and his small collection has Deadman, Etrigan, Super Sons, Deathstroke which he keeps bagged and boarded. He surprised the owner of our LCS by knowing and wanting Deadman comics.
So honestly, that’s how I go about it.

Yeah that’s what I do with my son but I’m worried my cousin’s husband have a small heart attack if I bring him home with just anything lmao. My son has Deadpool, Harley, Joker, Batman, X-Men, etc. We go he picks what he wants. I go get a lot of the same plus Tank Girl lol♡

Teen Titans go comics! I don’t read them, but the show is kid friendly, so I assume the comics are!

We picked one up yesterday, its adorable lmao my son wants em all. I’m like great… 31 more comics to buy haha

Batman Adventures was reprinted in trade a few years back so should be available pretty reasonably despite the ridiculous prices fetched by the first Harley Quinn.

I want a Batman Adventures #12 so bad just for my personal collection but the outrageous price has me shuddering, I just can’t afford a decent copy

I think gotham academy would be good.

@DCGoddessofmayhem. I used to have a copy as a kid. Think how I feel. :’(

Anything art and Franco. The aww yeah books, or lil Gotham by Dustin Nguyen

I’m afraid I don’t have any DC suggestions, but I regret the overall death of comics for kids. When I was young (which means that when my dad told an actual gas station attendant “5 dollars worth,” that bought a decent amount of gasoline), not only were DC and Marvel around, but also Charlton (which had a bunch of Hanna-Barbara licenses IIRC), Gold Key (home of the Warner Bros. and Disney characters), Harvey (Casper, Richie Rich), and Archie (which had a lot of suggestive material designed to go over the heads of kids). My earliest reading material was those comics that my dad brought home; I switched to DC and superheroes at the age of 7 or so when the Batman TV show came on in an afterschool timeslot and I became obsessed. Now, preschool-appropriate comics like those are all but extinct (and many comics shops don’t go out of their way to attract parents with little kids, either).

I know it is not the same as a physical copy, but Batman Adventures 12 is .99 at Comixology. Collected Trade versions of these comics are available there as well

I thought our library had that issue, because many issues of that comic are there, but a quick look couldn’t find it. Make sure it is not there before considering buying it.

Hmmm I’ll have to look