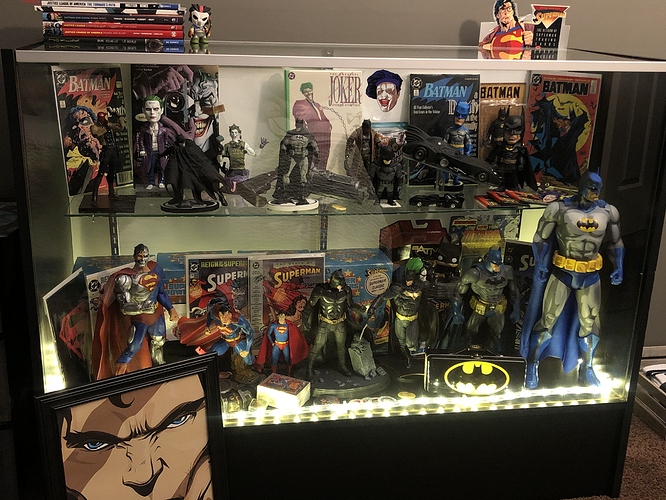 Top notch pieces on display here @maxburleyson.79671. Your thoughtful placement of the items really ticks up the visual as well. Consider the like button smashed on this. Very cool indeed.

Thank you for the kind words

I especially like that Big Figs Batman. Looks like it popped out of a TV screen or comic book page.

Who makes the Cyborg Superman on the left?

What an incredible display!

@maxburleyson.79671, this rocks my world! I absolutely adore the lighting on that far right Batman and your variety and display of each piece is really nice! Thank you for sharing with the Community! Can’t wait to see more of your collection as it grows.

Beautiful display! Thanks for sharing.

Dude! That looks awesome! Great collection! I might have to steal some ideas from this.

Very cool… but that Casey Jones Funko (or at least what appears to be so) deserves to be there way more than that Jared Leto Joker bobble head… burn it.

Absolutely RAD display! It looks just like something you’d see in a comic store.

I second the 12" Cyborg Superman from Mattel’s DC Super Heroes line. It’s one of their best 12" figures in general, and easily one of the top 3 of the group that were exclusive to Toys R Us.

@moro, For your Trinity collection, you might be interested to know that Mattel also made a 12" scale Superman in the DC Super Heroes line. The 12" Batman to the left of the 18" blue and gray Big Figs Batman came out with him, and was a Toys R Us exclusive as well.

Also @moro, if you want a great 12" Batman, look into the figure released in Mattel’s 2003-2004 Batman line. The original version came in black and gray, features a retractable utility belt grapple line, a Batarang, grapple gun, Batcuffs and a display base.

There’s also a blue and gray version of that figure that was a Kay-Bee Toys exclusive in 2005.

Hey @Vroom; thanks for the suggestions. I’m aware of the ones you mentioned and have resisted temptation to purchase on ebay more than once. Nice pieces